No. 1469: Unfortunately, the pattern is so that when believers are persecuted - then the majority is on the sidelines, and do pretty much nothing!

No. 1469:
Unfortunately, the pattern is so that when believers are persecuted - then the majority is on the sidelines, and do pretty much nothing!

Alone against the smoke, the man against power. The individual's victory over the collective. The unknown protester, or "Tank Man". The image of the Chinese protester who stopped a column of tanks in Beijing in June 1989, is known to far more than those who know where it was taken or why the situation arose. Like the famous portrait of Che Guevara, the image of the young man in Beijing has become an icon, a symbol of something greater. 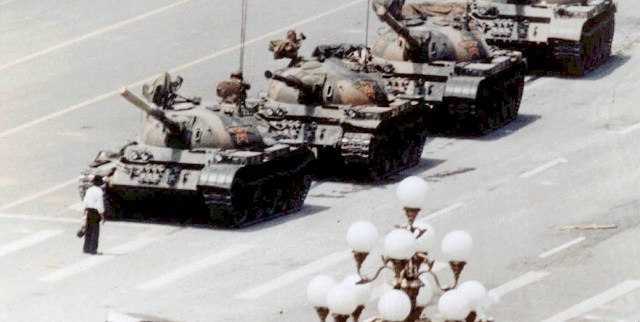 Christian Norway really has a formidable force if they exploit it.
But it all started with a man, Hans Nielsen Hauge.

In many ways one can say that the revival Christianity started with Hans Nilsen Hauge. And what was his "great" sin? It was that he held meetings - Christian edification meetings - without having agreed with the priest and been educated in Copenhagen for the priesthood itself. He broke the Convention poster, which was a regulation introduced on January 13, 1741 by King Christian VI of Denmark and Norway and banned legendaries from holding divine assemblies - conventions - without the priest's approval. For this, the good Hans Nielsen Hauge had to sit 11 years in prison on a single cell mostly where he suffered very under miserable and very bad conditions in every way.

God has raised other men and women of God, even today.
To mention two pieces only here in Norway, I will mention Jeremy Hoff and myself. What treatment have these two received?

Editor in the newspaper The day in Bergen Vebjørn Selbekk believes that Hoff was / is a false prophet and I am a so-called "Christian" nettroll. Even Satan could hardly say it better and spread such lies? Is it strange that the Christian people are scattered on the "wall" and the reefs get into among us with such attitudes and views of so-called leaders who are actually spreading the sheep, not gathering them with such statements and views.

Jesus was busy with one - while religious with "the many!"

Luke 15. 4 Which man among you, having a hundred sheep, and losing one of them, will not leave the ninety and nine in the wilderness, and go after what he hath lost, until he find it? 5 And when he has found it, he puts it on his shoulders with joy, 6 and when he comes home, he calls his friends and neighbors together and says to them, Rejoice with me, for I have found my sheep which I had lost!

What is so strange, if one stays alone or somehow is "outside" the crowd of believers.
It may be that one has been heavily charged, with substance abuse and other things.
Such as me being persecuted and brought to court time after time.
It can be a special revelation one has had learning, vision or otherwise. If one is not accepted then by the "big" community, then it is up to you to settle for yourself.
Jesus left the crowd, to seek out and stand with one. Contrary to what one can and will experience among the believers. I am very happy that I have a family that is with, and a few others both Jesus and friends.

I don't want to complain, but scripture says it's when we stand together that we're really strong.
Read, for example. Psalm 133 and many other places. But my experience is that believers are not close to getting up and having one. In fact, among the world's children, there are many times more love, understanding, and support to get as they accept more being different and conservative than believers often do.

Luke 16. 8 And the Lord praised the unjust housekeeper because he had wisely cared; for this world's children are wiser against their own family than the children of light.

I will finally quote a hymn I have received regarding all of the games I and my family have been through in recent years.

Psalm 91. 1 He that dwelleth in the secret of the Most High dwelleth in the shadow of the Almighty; 2 He saith unto the LORD, My refuge and my fortress, my God, whom I trust. 3 For he will deliver you from the snare of the fowler, from the devastating plague. 4 With his feathers he covers you, and under his wings you find shelter; His faithfulness is shield and protection. 5 Thou shalt not fear the fear of the night, nor the arrow that flieth by day, 6 for the plague that goeth forth in the dark, for the pestilence that spoileth the dinner. 7 Thy thousand fall by thy side, and ten thousand by thy right hand; 8 You shall see it with your eyes, and see how the wicked receive their reward. 9 For you, O Lord, are my refuge. You have made the Most High for your dwelling; 10 No evil shall come to thee, neither shall any plague come nigh unto thy tent. 11 For he shall command his angels to keep thee in all thy ways. 12 They shall carry you on your hands, lest you strike your foot on any stone. 13 Thou shalt tread upon the lion and the viper; You must tread down young lions and snakes. 14 For he clings to me, and I will deliver him; I will bring him to safety, for he knows my name. 15 He shall call upon me, and I will answer him; I is with him in need, I will deliver him and bring him honor. 16 With a long life, I will satisfy him and let him see my salvation.

Yes, the accident and the defeat it belongs to the enemy, we as Jesus believers will always prevail and be safe!
If people fail, they are fallacious and do not reach even believing people. Then God extends, and he stands up for us and we will be more victorious with him. Could it be better? No!
Satan comes to us like a roaring lion, but without teeth. All the teeth he lost on Calvary, not a tooth again!
Lagt inn av Jan Kåre Christensen kl. 04:04