"Pastor" Jan Aage Torp went to frontal attack on me and the Heavenly Blog in the fall of 2014. With evil eye, hatred in sight and to hit me and my family hardest possible. But the full support of the police at Manglerud here in Oslo, the website Searchlight with anyone who wrote and frolic there and someone else who was indirectly included as the newspaper Norway today!

I stood mostly alone when I realized quickly that everyone who spoke to me was attacked in the worst possible way. I wish no one would be mixed in and dragged in to be blackened online and otherwise by the boors who were on Narreapostel Jan Aage Torp's side, and they were a few. Then there were some jokes in words, language use, or to say lack of language and speech online.

The fact is that there are no believers - true believers - who have supported Torp. Why? I believe this for several reasons, not least what the Word of God says that we as believers should not report each other and pull each other to justice. Although we disagree with someone, we should not run a lawsuit against anyone for expressing themselves in such a way that we do not agree or endorse. 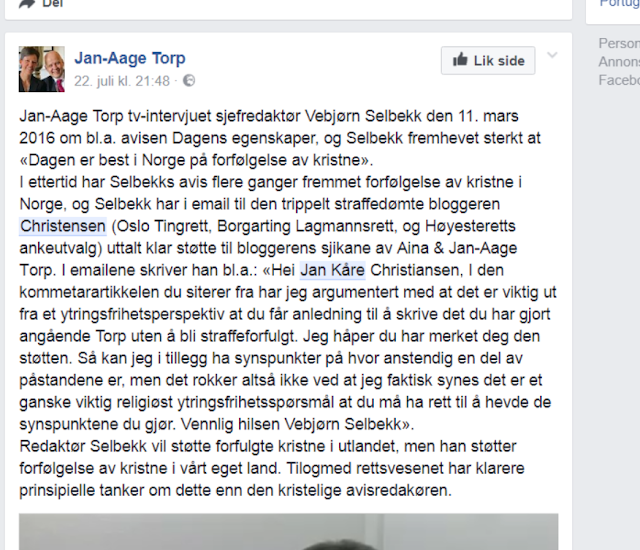 The goal of Jan Aage Torp when he was wondering the police and later the authorities that were soon too fooled as the Christian hatred that struck out in full bloom.

3.) Jan Aage Torp wanted everything I have written and spoken removed. Both about themselves and others.

4.) Jan Aage Torp wanted me and the Heavenly Blog closed down and removed for good. These were his innumerable goals.

What has Jan Aage Torp achieved?

1.) That, as a believer, he is seen as a "betrayal" to the Christian faith. Then no true believer reviews and makes matters against each other.

2.) Through this case, Jan Aage Torp is known to be the Pastor who lives in adultery with being married. But that doesn't admit it. No one other than Torp has spread the message that it is against the word of God to be re-married as Pastor and preacher.

3.) Jan Aage Torp has not really achieved a single thing! I write and speak just as before, which nothing has happened!

Isaiah 54:17 No weapon that is forged against thee shall prosper, and every tongue that setteth thee shall be condemned; This is the inheritance of the servants of the LORD, and the judgment which they receive of me, saith the Lord.

Note that this word has come true to the letter. Not a word by Jan Aage Torp's wishes has happened. Everything has gone against him and he has become "celebrity" to break God's word.

3.) Jan Aage Torp wanted everything I have written and spoken removed. Both about themselves and others.

Achieved: Received his "own" blog: http://justismord.janchristensen.net/

4.) Jan Aage Torp wanted me and the Heavenly Blog closed down and removed for good. These were his innumerable goals.

Achieved: Got zero support from others, except at Finn Jarle Sæle who is as bad as Torp in many respects.

This is what Jan Aage Torp writes:

"There is statutory authority to impose fines on him. We will probably promote this instrument in the near future. There is good case law here. 12,000 kroner that a one-time fine hardly owes so much. But 1,200 kroner a day for 1000 days may be somewhat worse? ”

This has been the goal and purpose of the evil Jan Aage Torp all the way. Try to crack me, showing that he's been playing and playing with the Evil One all the way with the same mission.

Satan and Jan Aage Torp have the same agenda we can read about here.
It's stealing money, family and everything in from me. Here we read the following:
"The thief just comes to steal and murder and destroy!"

This is a theological and biblical point of view. Just like Jon Wessel-Aas pointed out what my concern was. I quote this here:

Media law attorney Jon Wessel-Aas reacts to violations of Clause 390a of the Criminal Code "because of troublesome behavior or other ruthless behavior having violated another's peace" is the basis of the case against Pastor Jan Kåre Christensen.

- I cannot comment on the details of the case, but I think in principle that dOne particular point is that this section is used because it is a matter of speech in a blog. So, Christensen does not seek out Torp by phone, text message or in any other way directly, but writes what he believes about him as a pastor in the blog. It is outside the core area of ​​the relevant provision, says Wessel-Aas, who emphasizes that he only knows the matter through circulation in Vårt Land and by reading the actual decision of the case.

Wessel-Aas points out that the aforementioned provision in the penal code from the old has been called the "telephony law".

- It is clear that bullying and harassment in social media over time can make people not have the energy to be more. But I still think it is important that the court does not extend the penalty clause to too much. It is a point to be as concrete as possible when limiting freedom of expression through legislation, says Wessel-Aas.

Statements such as "living in adultery" make it more obvious to use the lien, the lawyer believes. Libel is decriminalized in the new Penal Code and can thus only form the basis for civil lawsuits. According to him, it seems more relevant in this case.

"I believe there is danger in the journey if the section in the Penal Code is expanded by adding something that is no longer criminal," says Wessel-Aas.

Public person. - What consequences can any judgment have?

- If there is a criminal conviction in line with the charge, I believe much else can be judged in the same way. It will make the boundaries of freedom of expression unclear, which in turn can cause people to avoid expressing themselves, Wessel-Aas replies and points out that there are nevertheless provisions to protect against untrue accusations, violations of privacy, threats and incitement to violence .

Wessel-Aas points out that Torp is a well-known figure in Christian-Norway and far in the same position as many politicians.

- The room must be larger when it comes to public opinion.

Christensen disagrees with how Torp practices the relationship between life and learning, ie his interpretation of biblical texts, emphasizes Wessel-Aas.

- Also, the ceiling height must be large.
(quote end).

Only takes a little in the end that it is exactly the same as Vebjørn Selbekk pointed out. That this is a spiritual and moral affair, and has nothing to do with harassment, heat and cyberbullying. It's like the East is from the West.

Bible lesson from the witness box

Jan Kåre Christensen brought his well-used Bible with him when he yesterday took his place in the witness box in room 519 in Oslo District Court. The court's members, the audience and the press in the tiny and crowded courtroom witnessed something as rare as a theological debate on divorce and remarriage.

Christensen and his lawyer Brynjar Meling based their entire defense on the fact that the characteristics that the accused has brought on the web about Pastor Jan-Aage Torp, are only religious opinions. The various words and expressions used were defended with reading from the leather-bound book Christensen brought with him. The Bible references flew back and forth between the defender's space and the witness box.

Words like "adulterer" were explained by the religious language the Bible itself uses, or the "Canaan language" which Christensen himself termed it as from the witness box. He argued that the New Testament denotes people who differ and marry someone other than their original spouse, in this way. Therefore, Christensen believes that he has only criticized a well-known and highly profiled Christian leader for not living in covenant with the Christian faith.

The use of other, more non-religious terms such as "power man", "narcissist" and resembled defender Christensen with theological disagreements about the way Jan-Aage Torp has run his parish activities. Among other things, the court heard about an acquaintance of Christensen who should have given NOK 1.5 million to Torp, but since regretted it. Torp himself admitted, furthermore, in his testimony that also he on his website has called Christensen both for "pleasure lies", "idiotic", "ruminant", "naughty", "evil and stupid" and communicator of "social pornography"

It is these very special religious overtones that make the case against the "harassment pastor" Jan Kåre Christensen so special. That is why it becomes more than a common case of privacy infringement. Or something more than a quarrel between two Oslo pastors who do not exactly practice the warmest brotherhood community.

In isolation, there is no doubt that Jan Kåre Christensen's characteristics of pastor Torp are far beyond any decency. Most people will probably perceive Christensen as a kind of Christian webmaster.

But - and it's a big "but" here. If this is a matter of religious utterances, they will in practice have a stronger protection than harassment statements without such a faithful basis. Ubaydullah Hussein, the well-known and infamous leader of the Prophet's Ummah, was released last summer by the Court of Appeal for wool carried out terrorist acts online. It also applied to a terrorist act that had demanded Norwegian human life, the action against the partly Statoil-owned oil facility in In Amenas in Algeria. The court assumed that in this case it was a religious statement. Hussain's praise of Allah for this bloodshed was based on Hussein's own violent interpretation of Islam.

These cases are not directly comparable. But they both say something about the space of religious opinion, even when what is said or written is perceived as offensive and abominable by the vast majority.
(quote end).

Jan Aage Torp really hung up a hanger to me like the evil Haman.

Today he hangs in himself and all of Norway, Europe and the world knows that he is a coward who reviews Christian people and does everything to get them removed. This is evil both in God and in people's eyes, fortunately! Even his own children have renounced him, at that level Torp lives today.

Had Torp been a man of God, he would have left everything to the Lord. Because it is the Lord who belongs to the judgment, no one else.

I have only wanted one thing, it is to be allowed to freely proclaim the whole of God's counsel for salvation. Wherever one is allowed and allowed to warn against re-married publishers!
Lagt inn av Jan Kåre Christensen kl. 02:56