No. 1591: Thank you all who support me and the heavenly blog through prayer, money gifts, and that!

No. 1591:
Thank you all who support me and the heavenly blog through prayer, money gifts, and that!

Get a claim the Norewegian state to keep up what God's word says about divorce and remarriage to pay 3.000, - kr. That's what bake everything together!

Other driver with truing, death threats, and much more. All of this, I and my family have been exposed to where they also deal with forgery and other things and the police do not care! 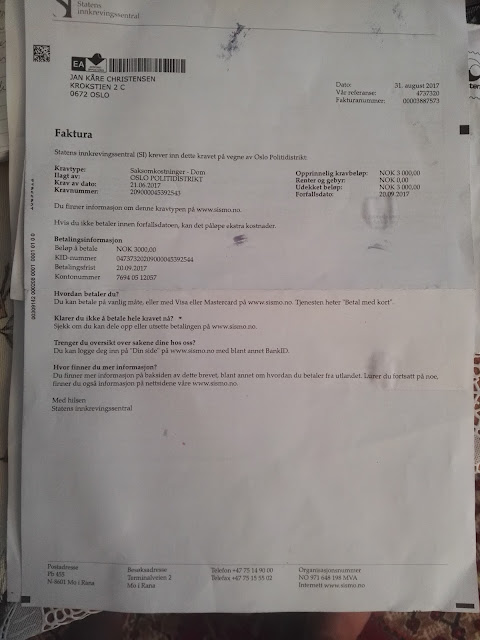 Here is the requirement, which is now paid before a state in 3000, - kr for upholding God's word and call a Pastor who steals catching up 1.5 Million by the member's being manipulative and nasty. Yes, it is disgusting when a Pastor calls a believer for quite ill after having passed him for the net sum of 1,500,000 kr.
Then you should be allowed to react and use some energy expressions, after all, 1.5 million is a bit of money.
Afterwards say that he will have the money for himself and would not pay those back witnesses being a sort of horror and criminal in my eyes!

More and more people understand what I and the heavenly blog are subject to is Christian persecution, nothing else!

Now I am glad that with their support and prayer, we are able to make up for ourselves what the Norwegian state is doing to me and the heavenly blog is evil!

I have not done anything other than to say the truth, and are punished for this is really an honor.

Matt. 5. 10 Blessed are they which are persecuted for righteousness' sake; for the kingdom of heaven is theirs. 11 Blessed are you when they scorn and pursue you, and lie to you all sore for my sake. 12 Joy and rejoice! for your reward is great in heaven; for thus they persecuted the prophets before you.

It is an honor to be blamed for the name of Jesus and the word of God's sake, here the scripture is very clear. It is also through the word of God and the testimony of Jesus that we win victory!
Includes a longer scriptural section from the Apostle deeds to tell us that in our opposition, although it is trial. This is how the gospel always proceeds, and God tries the hearts of all of us. Do you want to be with my dear friend? The road is open to it!

Acts 4. 1. But while they spoke to the people, the priests and captain of the temple and the Sadducees came upon them; 2 they grieved that they taught the people and preached in Jesus the resurrection from the dead, 3 and they laid hands on them and put them in jail until the next day; because it was all night. 4 But many of those who heard the word came to believe, and the number of men became about five thousand. 5 The day after it happened, then, that their rulers and elders and scribes gathered together in Jerusalem, 6 and Annas the high priest, and Caiaphas, and John, and Alexander, and as many as were of the high priest seed, 7 and they set them in the midst, they asked them: By what power or by what name did you do this? 8 Then Peter said unto them, filled with the Holy Ghost, in the councilors of the people, and in the elders of Israel. 9 If we this day are examined for the good deed done to a crippled man, by what he has been healed, 10 be it known to you all, and to all the people of Israel, that of Jesus Christ of Nazareth, whom ye crucified, he God raised from the dead, by him, of this healing before your eyes. 11 He is the stone which was rejected by you the builders, which has become the cornerstone.12 And there is no salvation in anyone else; for there is neither any other name under heaven given among men, whereby we must be saved. 13 But when they saw the boldness of Peter and John, knowing that they were unlearned and playing men, they marveled, and they knew them again that they had been with Jesus; 14 And when they saw the man standing by their side, he that had been healed, they could not contend. 15 they had commanded them to go out of the council, and they conferred among themselves, saying, 16 What shall we do with these people? for that a notable miracle has been done by them, it is obvious to all who live in Jerusalem, and we can not deny it. 17 But that it may spread no further among the people, let us strictly threaten them no more to speak in this name to any man 18 So they called them in and commanded them that they should not speak or teach in the name of Jesus. 19 But Peter and John answered them, Judge, though it is right in the sight of God to obey you more than God. 20 For we can not help talking about what we have seen and heard. 21 They threatened them even more, and they let them go, because they had no counsel to punish them for the sake of the people.for all praised God for what had happened; 22 for he was more than forty years old on whom this miracle of healing had happened to. 23 When they were released, they came to their own and told them all the chief priests and the elders had said to them. 24 And when they heard it, they lifted up their voice continually to God, saying, Lord! you who made heaven and earth and the sea, and all that is in them, 25 who said to your servant David, Why did the nations and the nations blame the things that are futile? 26 The kings stood up, and the rulers were gathered together against the Lord and against his anointed - 27 yes in truth, in this city against your holy servant Jesus, whom you anointed, both Herod and Pontius Pilate, with the Gentiles and the people of Israel, 28 to do whatever thy hand and thy counsel determined before to be done. 29 And now, Lord! behold their threats, and grant to your servants to speak your word with all boldness, 30 By stretching forth thine hand to heal and signs and wonders by thy holy name of Jesus.

Now this goes its course against Court of Human Rights in Strasbourg in France. So at least we have tried at least.
Trying to do as good as possible and possibly hoping, believing and praying that one wins is thousands of times better than not trying.
If one has not tried, then one guaranteed will fail!
I'm trying, and then we'll see what the outcome will be.
Then nobody will be able to say afterwards that I did not try because we really do. Although I have to cover this from my own pocket, mostly.
Then I will try. But it's free to be my support. Just deposit money into account, see here:

Be blessed in the Name of Lord Jesus Christ!