No. 1570: Why the sentence against me is the history of Norway, one of the greatest justice words, if not the biggest ?!

No. 1570:
Why the sentence against me is the history of Norway, one of the greatest justice words, if not the biggest ?!
http://the-heavenly-blog.janchristensen.net/2017/08/no-1569-we-need-50000-i-count-on-to-win.html
Picture of one of the judges who dismissed my appeal in the Norwegian Supreme Court, Arnfinn Bårdsen, there were two others who dismissed my appeal. It was Wenche Elizabeth Arntzen and Wilhelm Matheson, who have shown that they are not fully geared to the job they are supposed to do after my assessment. To reject this appeal is completely "hit"! 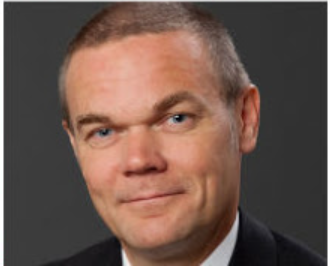 Picture of the rejection of the appeal without justification showing only that the verdict against me is fabricated and we have in fact not had any chance of winning. Will therefore try the verdict before the Human Rights Court in Strasbourg. 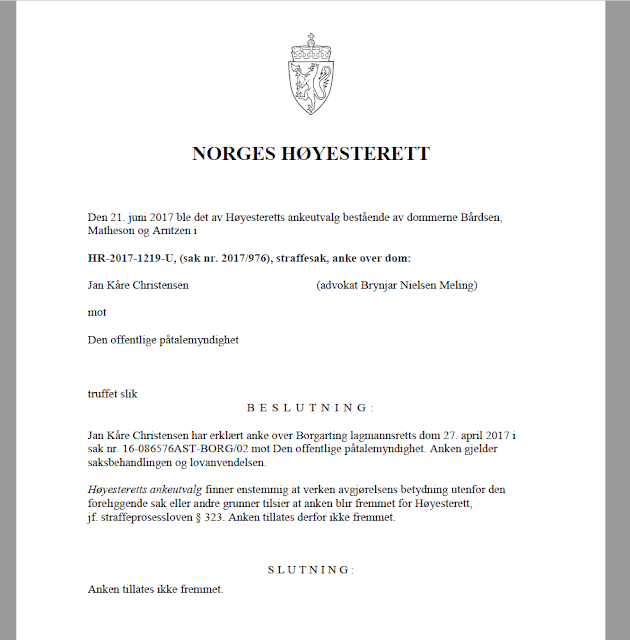 I do not mean that what I have been and is exposed to is Norway's worst justice word, but the biggest in the sense that I have been convicted of a thing that has never been dealt with in court. And what I am charged with was dealt with in court, but not convicted of.
Then there is a judgment that is written in many ways in the "back room" and reminiscent of a judgment from Congo or North Korea, albeit not worse. Should try to office this, as some do not want to or understand this.
The whole case is based on false accusations from Jan Aage Torp's side, where he should and should be sentenced in this case, not me!
Fact of the case
The District Court has made the district court's description of fact to its own by citing the three most important sections of the District Court's reproduction of the fact on pages 3 and 4 of the Court of Appeal's judgment. As far as it goes, this description must therefore be taken into account, str.prl. § 306, second paragraph.
(Quote ending).
When I have been convicted of not having been debated in court.
Then is this missing? And I get accusations against me that seem to be written in a "boy's room" when I get accused and appealed to opinions, attitudes and views that have not been addressed.
The Justism of Time, a judgment ala Congo And North Korea is this!
It is therefore a judgment that limits freedom of belief and expression.
Section 390a. Anyone who, by means of intimidating or disturbing behavior or other reckless conduct, violates another's peace or contributes to this shall be fined by imprisonment or imprisonment for up to 2 years.
I have never sought Jan Aage Torp once, but by him and his supporters. Have received a lot of mail, document falsification and much more. This completely ignores the police, which just shows me the police as a criminal!
Final Comment:
It is not without reason we want to try this case before the Strasbourg Human Rights Court. That is the sentence against me and the heavenly blog is a justice word.
Related links:
http://the-heavenly-blog.janchristensen.net/2017/08/no-1569-we-need-50000-i-count-on-to-win.html
http://the-heavenly-blog.janchristensen.net/2017/08/no-1568-vebjrn-selbekk-fails-to-write.html
http://the-heavenly-blog.janchristensen.net/2017/08/no-1565-miserable-appearance-of-police.html
http://the-heavenly-blog.janchristensen.net/2017/08/no-1562-nazis-are-free-to-demonstrate.html
http://the-heavenly-blog.janchristensen.net/2017/07/no-1561-searchlight-website-sees-false.html
http://israel-blogg.janchristensen.net/
Lagt inn av Jan Kåre Christensen kl. 00:13