Picture of Jan and Inger Hanvold where now Inger has begun to react to something that does not match. And Jan Hanvold uses God's word to mislead her! This clearly shows that Jan Hanvold is a false prophet. 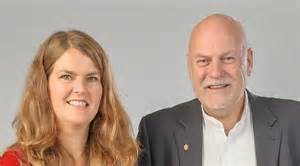 Have a job where I have the opportunity to listen to the radio with various Christian preachers. Then at 107.7 here in Oslo, sending various Christian programs.
One who has tuition stuck here on the radio between kl. 6:30 to 7:00 is no less than the great "apostle" Jan Hanvold.
Here one morning he said the following: "Now I have been married to Inger for 19 years, then I want to say those who criticize me for being charged as Pharisees"!
Furthermore, he said that Inger was somewhat embarrassed, he meant all his marriages and what it had to say to the children and others. He thought it was tricky, but he was over this. He was not tail but head. In other words, the saying goes into Jan Hanvold's Bible understanding that "time is playing all sores"!
In my Bible there is nothing about this, on the contrary. The word of God clearly states that we must make up our sin whether we have lived in this sin for a day or 19 years.
We do not read a single verse in God's word that because Jan Hanvold was married several years with the first wife, and shorter with wife No. 2.
But now he has settled down with Inger.
The scripture says, on the contrary, that this is even more serious that he has not made up his sin and settled with his first wife.
According to Jan Hanvold, wife # 3 is concerned that he has more marriages.
Should one believe Jan Hanvold's own teaching this morning I heard him, wife 3 should be bothered about this.
But the boss himself, Jan Hanvold has now said that 19 years of marriage, it has made "the hunch!
Now he is no longer tail, but head. He is set over all power and authority, no one is further up in the "system" now than him.
19 years of marriage and Satan has and people have no prosecution is now the "new" doctrine of apostle Jan Hanvold!
Jan Hanvold appears as a false prophet and Inger Hanvold as a lady with a bad conscience. It tells me that there is certainly something good in Inger Hanvold who, after all, reacts to her living in the words of the letter ?!
The scripture is very clear that Inger Hanvold does not live right when he is married to a divorce. And that Hanvold as a servant of the Lord should not be three, but a woman's husband.
Now when Inger has obviously responded to this, Jan Kaare comes with God's word to Inger. To calm her, this is nothing but Satan's trick, we can not use God's word in the cabin and be!
We can not use Deuteronomy 28 to be head and not tail when conscience begins to react. Hanvold does everything to push down the conscience of Inger using these scriptures.It's about remorse and what God's Word says about this, which Hanvold obviously hates. Therefore, he manipulates Inger, who had said, according to Hanvold herself, that she felt uncomfortable with That he was so extreme and more marriages!
Jan Hanvold's last book is called "Without Filter"
This is so wrong it can be! Hanvold over presents some scriptures, and other pages of God's word do not mention him.
The man is nothing but a typical false prophet who lives just like a false prophet lives. According to their own lusts and after a false gospel of sin and reverberation, it is free!
Hanvold can, for example, Do not say that Inger will use Deuteronomy 28 to be head and not tail when conscience reacts. And he can not say he has now been married 19 years with Inger and the other 21 years in service with two other ladies, and because Inger's time is longest.
So does God overlook that repentance is to live in the face of a true Christian? No!!!!
As said again, we have revealed Jan Hanvold on the Heavenly Blog. If you want to follow him and support Vision Norway, it is of course free of charge. But never expect this to take you or someone else to heaven.
The word of God says very clearly that it is when we walk in the word of God, we walk in the Spirit and are on Heaven's Way!
Related links:
http://the-heavenly-blog.janchristensen.net/2016/10/no-1366-do-not-need-jan-hanvold-to-be.html
http://the-heavenly-blog.janchristensen.net/2011/09/emanuel-minos-and-co-are-like-bileam.html http://the-heavenly-blog.janchristensen.net/2013/05/nr-498-inger-and-jan-hanvold-are-pigs.html http://the-heavenly-blog.janchristensen.net/2013/05/nr-503-can-hanvold-in-adultery-get.html http://the-heavenly-blog.janchristensen.net/2013/05/nr-517-tv-vision-norway-huge-monetary.html http://the-heavenly-blog.janchristensen.net/2013/05/nr-506-jan-hanvold-sent-from-satan-to.html
Lagt inn av Jan Kåre Christensen kl. 01:17