No. 678: Notice the end of their lives - how we die testify our lives indirectly scripture says!

No. 678:
Notice the end of their lives - how we die testify our lives indirectly scripture says!

Begun is not complete said. It 's really true . Have seen many zealous and wholehearted Christians for some time, so dabber it off. And those who stood before the Lord and the Word of God before , today is the liberal who get . Notice the end of their conversation , the scripture says . Unfortunately, many fail the Lord in the way that one does not develop and grow as a Christian . Other by becoming captures of heresy , but the vast majority by the hills out and no longer dare and will stand up for the truth .

Photo of Toralf Gilbrandt standing on God's word almost to the end of his life . The last years of his life was a great tragedy which he also vouched for the false prophets Ulf Ekman , Aril Edvardsen and others. Among other he said of Ulf Ekman that have was Scandinavia's best Bible teachers . It is simply false , Ulf Ekman is and remains to be a cheat , liar and everything else a great Bible honors . Sadly Gilbrant was an important bridge between Pentecostalism and religious movement , and went public good for the Word of Life - Pastor Ulf Ekman's book " Doctrines " in the late 90s. No wonder he was in failing health at the end of his life that others apostate Pentecostal preachers have. 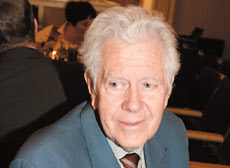 What the prophet Joel Barsjø said :

Barsjø participating in Smyrna Oslo in the early 1990s taught this to die and end . Did people an easy exit was a sign that they were prepared for heaven. May they go through suffering , illness , and more. Then there was the Lord's way of empowering them. Think there 's a lot here .

From my Bible Hebrews 13 Comments 7 Do not forget your leaders , those who spoke the word of God to you . Think back to how they lived and died , and take the example of their faith !

This is written to the church in Jerusalem who had had a lot of really great spiritual leaders . Some were also died or were no longer present in Jerusalem. Take lessons from them and live accordingly.

17 Obey your leaders and abide by the them! For those keeping watch over your souls , and shall immediately give an account . Make sure they can do it with joy, without sighing . Otherwise it will not be beneficial for you.

God has put pastors in the church of God . We should show them respect and they deserved to be good role models and examples. They will one day present accounting for our lives when we will receive what we spent our lives as saved . 2 Cor. 5 10 For we must all appear before the judgment seat of Christ , that each one may receive what he has done in his life in the body , whether good or evil . ( end of quote ) .

The "old" Christians believed that God testifying of how we went across the river . The same as Barsjø said . Therefore, we must notice about Christians endure to the end of his life . It does not help to start delightful and end up being the one that failed and failing the test and test.

Why fail so many believers the Lord? For several reasons as mentioned . But when God makes things happy things in their own way according Barsjø and what many learned and thought before. When they get a hard output of life where they are small in themselves and see their own addictions and shortcomings .

What I want to say with this is that God treats us, and it must sometimes something that does not quite match our image of God, that God is just good . But he's not , he treats us so that we will be fit and worthy of His Kingdom. Therefore, we must learn to accept both chastening and admonition . This is part of our spiritual upbringing and that we are legitimate children of God. And we have " deprived " ourselves , and we are God's children. Then God many times do end our lives difficult so we will be found worthy of the world to come . This makes the God of love , welcomed us , as he is and remains good !

From my commentaries Hebrews 12 5 Have you forgotten the electrifying words that speak to you as to sons : My son , despise not the chastening of the Lord , do not lose heart when he rebukes you.

The fact that Paul did so strongly contended with them was painful yet necessary. To hear one go you are actually part of it to be chastised and chastened by the Lord. That God also uses people to treat one makes many times the process more humiliating , but it is necessary to reprimand too!

6 For the Lord disciplines those he loves, and chastises every son he receiveth.

To get the refs are proof that you are a true born child of God. I as a father raising my own children , not the neighbor . So it is with God , he just raise their own children.

7 That you must suffer, it serves to train you, God is treating you as sons . For what son is not disciplined by his father ?

One day all the pain will be a thing of the past. Now in the meantime God raise us for future glory . It is quite natural that there is a process in pain . All life that grows also painful elements in it . Had it been dead had never known to change and pain .

8 If you do not receive discipline like any other , you are not sons but bastards .

Here is Paul built on what is natural for us too . As a sign that one is a real child hears also teaching, reproof and instruction with , of course, on the spiritual plane .

9 We have all had human fathers who disciplined us and we respected them. Do not we have much more reason to bow down before him who is the Father of spirits , so we can win life ?

Our Father in heaven is our common Father of spirits . He treats us both equally and induelle . Equally , in that no one has tinned with him because of external things , reputation and rank in human and eyes. Induelle because each treats him as the best and expedient for the individual.

10 Our fathers disciplined us for a little while as they thought best . But he does it for our good , that we may share in his holiness.

God in heaven is a responsible, reliable and loving Father . He is the very best both Father and Mother . Nothing of what he does can someone do better and after him even better. Psalm 103 13 As a father has compassion on his children , so the Lord has compassion on those who fear him. 14 For he knows how we are made , he remembereth that we are dust .

11 All chastening seems at the moment to be more grief than joy. However, since it provides peace of righteousness and of those who have been trained by it.

Here is what Paul repeats itself. But the path of least resistance is for us humans but it is very often not God's way. When Israel went out of Egypt , they went through the most perilous road , and the hardest . But it was the way of God and where God could do great work and show who he was.