No. 685: Why renders the Christian newspapers statements of the false prophet Jan Hanvold who judge others jaunt into and home, but Hanvold always goes off even though he is both a heretic, scam and live in sin?

Why renders the Christian newspapers statements of the false prophet Jan Hanvold who judge others jaunt into and home, but Hanvold always goes off even though he is both a heretic, scam and live in sin?

Jan Hanvold is a false prophet, fraud, scam. He can block out and do whatever suits have Ether my opinion he is a narcissistic man. But what I think is bad and direct unnfallende is that he is allowed to hold on to without being refuted and confronted with the truth. The reality is that Hanvold's in Babylon with all that belongs to him and herself. Wrong Teacher, divorced, re-married, sexually immoral, etc. Then a pointing finger at others, but without having made up his own sin and transgression lives than a delusion.

The newspaper Our Country has a form of hate love relationship with Hanvold. They write seemingly against him, but at the same time they release him before. But they are too cowardly and unnfallende to mention that Hanvold live in sin is a heretic. A real false prophet. Picture of the editor in chief of Our Country Weekend Atle Simonnes. 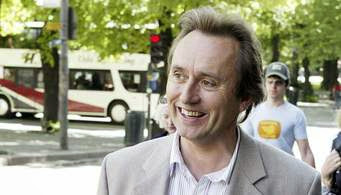 This we now see, this striking weakness while seeking Hanvold relatively large coverage in the newspapers and is quoted and taken seriously. But no one makes any negative questions about this villain and false prophet, this is really strange and sad. Coming here with some considerations of points:

1) It is striking that one who Hanvold who the antichrist spirit in mind and spirit, can work and have a prominent position. It is for me a confirmation that the Christian people in Norway are deceived and spiritually blind.

2) Hanvold now warning against Ulf Ekman. Also has shut him out from his television screen, this is applauded, accepted and here is a man of action and convictions. But all this shows that he is tough and should have been equally tough questions back in the rain. But here it's been posing as an oyster at all. This is just weakness and miserable.

3) Hanvold business is really so similar Ekmans, that when he attacks Ekman, so he attacks Ekman. Is there no one who sees this? Here are some his overnight from what Hanvold writes against Ekman, Ulf Ekman shows scorn against the evangelical church. And put sectarianism in the 90's. Then it was like that in Norway, that if you had not gone to the Word of Life. If you were not qualified, to serve the Lord. With a strong focus on demon expulsion and sectarianism. To the personality cult of Ulf Ekman and other ministers the Word of Life. When we see all the thousands of Norwegians who have attended the Word of Life. Looking incredibly small fruits of it. But as the ubestridde leader in Scandinavia, is not Ulf anyone. And he does is a huge betrayal against all that, that the Reformation brought

4) When Hanvold now warns Ekman and believe that this is several years back in time and everything else that he is now writing against him and speak against him on his TV channel. For all of us this was the Ekmans conversion only a transition, not something that happened suddenly. Is Hanvold so stupid? Of course, all about manipulating and keep on supporting their partners who have been deceived and erred. In order to support him.

5) Why can Hanvold always so cheap from? And those who defend him, they get almost no hard and good counter question? Are not we Christians brothers and brothers in the Lord? We must also expect that is close, hard and fragile being touched and examined.

6) We all have remained elusive and not confronted people and we should have warned and admonished. Do we unfortunately many times failed to drop costs and the discomfort it causes. But it is not the right way and the Lord's way to solve things.

8) Hanvold is so vulgar and nasty. Here on the radio in Oslo he screams that he is guilty of two adultery. But to hell with all those who do not accept that I am re-married he cries out. How spiritually blind must one be to see that he is a false prophet that Jesus said many would come in the end times? Matt. 24 11 and many false prophets will arise and lead many astray.

9) Once all the posts for and against Hanvold never attack where he is stuck, first of all, it is the moral and ethical. He attacks everything and everyone, is applauded by several, but even he reads in sin. Talk about standing with both feet planted in the harlot. Scripture says that he which is joined to a prostitute becomes one with the Spirit with her. Hanvold are not allowed and right to remarry, but he takes over just as it has matched, and obeyed him!

10) Christian people are complicit in Hanvold pity when no one point this out even if the majority is aware of his life and heresy, then becomes complicit in his evil deed.

2 Joh.e. 10 If anyone comes to you and does not bring this doctrine, do not receive him into your house, and bid him not welcome! 11 for the bidding him welcome, being an accomplice with him in his evil deeds.