No. 682:The false prophet Ulf Ekman is now a Catholic, who by others are fooled by him again? Unfortunately, this is not credible , as he has just been retired!

No. 682:
The false prophet Ulf Ekman is now a Catholic, who by others are fooled by him again? Unfortunately, this is not credible , as he has just been retired!

Pastor Ulf Ekman has really been a scam all the way and run their own race , so also now. In my opinion - which I 've written about before in several articles - is he like so many other ministers , particularly Pentecostal charismatic preachers. A wolf in sheep's clothing , he now chooses to be Catholic testifies that he has never been rooted in the word of God and the grace that is in Christ Jesus. Photo of Ekman taken several years ago when he was on his way to become a Catholic. 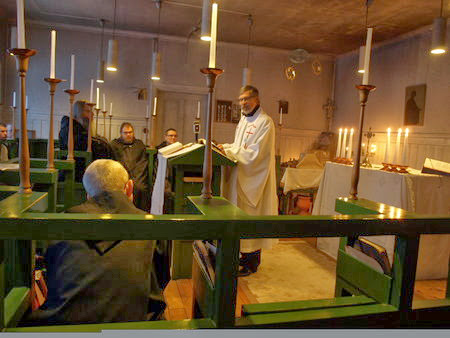 That Ekman being a Catholic is not really any wonder then he has always been on the edge of God's word and never have stood for the true gospel message . He has never really been a true evangelical Christian. Here are 10 things I like to mention in connection with Ulf and his wife Birgitta transition from religious movement to Catholicism .

1 ) In the spring of 2013 went Ulf Ekman as Pastor of the Word of Life and has thus secured financial life. Not bad only that, but when everything is right to make such pranks !

2 ) Ekman has always been extreme , he has a disturbed personality and are even more disturbed intellectual life in my opinion . When the Pope was in Sweden for 15 years since he was his biggest critics . Now he's embracing of all that he and what the Catholic Church stands for. From a ditch and the next .

3 ) From a ditch and the next I write . Words of life and faith movement doctrine is bad, so too with the Catholic Church by and large it all. That he now chooses the largest opposit not only shows that he has never been a born again Christian who is born again by God's word.

4 ) It is strange to read his resignation . It is overwhelmingly positive , but now he has found some roots etc. Therefore, the transition to the Catholic Church . Had been exciting to received a theological and doctrinal answers to why he has " changed " page ! But I have seen very little .

5 ) Ulf Ekman has really always been elusive and weak, therefore this progress . Most Christians are really weak and evasive , therefore they recognized themselves in him and followed him.

6 ) When Ulf Ekman and Birgitte leave the Word of Life and the Pentecostal charismatic movement should others who have believed and followed the same route , asked themselves what they 're doing. But more than is deceived and misled , to less selvinnsinkt get one. And to ask themselves questions, it is and remains difficult, if not impossible.

7 ) Thoralf Gilbrandt believed that Ulf Ekman was the largest Nordic Bible teacher . No one has written more against the Roman Catholic Church than Gilbrandt . Wonder what was said today if he had lived and been sane ? And others who have defended and supported him , what they think today? It turned out that he was one of us anyway.

8 ) Ulf Ekman is not only a leader and preacher , but an ordinary person . That he makes such a drastic choice makes me think of these words from the Bible . They lead and being deceived . He is going from one extreme congregation to a new extreme church or sect .

2 Tim 3:13 But evil men and seducers shall wax worse on people , go to worse , deceiving and being deceived .

9 ) To make such a drastic step as family Ekman have done, would it be interesting to seen who he talked to and discussed things with . And there are some who have warned him ? There must have been some or all equally uempatiske and everything is really as good? I do not know, but interesting it should have been.

10 ) The last question is whether he wants and his famille will find gratification in the Catholic Church or not ? I think never , to me it seems like he needs to experience the gospel. Assumption estimated he never been born again and have to be born by the word of truth which liveth and abideth .

1 Peter 1:3 Blessed be the God and our Lord Jesus Christ , who according to His abundant mercy has begotten us again to a living hope through the resurrection of Jesus Christ from the dead ,

1 Peter 1:23 For you have been born again, not of corruptible , but incorruptible, through the word of God , which liveth and abideth for ever

As Ekman has been doing studies , travel , etc. Almost like a purpose to be Catholic , no one has said from or are they so fascinated , intrigued and naive of him that they failed to consider realistic and healthy? The people around him from the Word of Life ? There is far more to say about this. But it does not surprise me that he too will eventually go out of the Catholic Church . But in the meantime there are a number of questions and issues that I and certain others. Certainly would partakers in and displayed. But what I wrote in the headline I stand within its " The False Prophet Ulf Ekman is now a Catholic, who by others are fooled by him again? Unfortunately, this is not credible , as he has just been retired ! ". I think Ekman ran out of American influence - ye should do as I tell you - ekstremforkynelse . He leaves behind a lot of people who do not understand some things , these svovelpredikantene has never made ​​another one and stand on the podium and scream and condemn all who do not follow them blindly. It is best and maintain their simple faith in God's word. Recommend Smyrna Oslo and all that we stand for!