No. 687: Trinity doctrine is a heretic and heresy teachings of the worst kind as they believe this is what Jesus and the apostles believed in and preached!

No. 687:
Trinity doctrine is a heretic and heresy teachings of the worst kind as they believe this is what Jesus and the apostles believed in and preached!

Have talked to a good number of Christians who believe that the Bible speaks of three equal Gods in a common deity . This is so completely wrong and misguided it is possible to get . The Bible speaks of Gods, God etc. But when talking about the one true God, aiming always and in 100 % of cases, always against God and Father, no one else. It's just him , and not even the Son to review in Scripture as the only true God.

Picture of Jesus praying to the one true God , the Father, the creator (Jesus says that he came forth from him) and God. 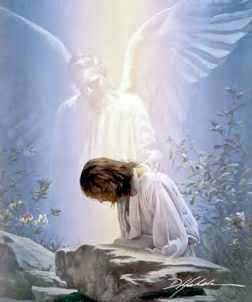 Heresi out from Wikipedia : The word heresy comes from the Greek αἵρεσις , hairesis (from αἱρέομαι , haireomai , "to choose "). It stated is that it concerns a group or individual has chosen to believe in something other than the established dogma. The term became popular in the 2nd century, when Irenaeus wrote his Adversus haireses , Against heresies . He described his own faith as Orthodox ( ortho - , ' right ' + doxa , ' faith ' / 'thinking ') . The word heretic comes from the Cathars , also known as the Albigensians , who followed a doctrine inspired by Gnosticism and a period in the Middle Ages were seen as a major threat to the Catholic Church in France.

Most heretics , or heretics , not counting their own opinions as heretical , but looking on the contrary on the established dogma as heretical . For instance, the Catholic Church in Protestantism as heresy , while many Protestants describes the Catholic faith as heresy. The determination of what is a heresy is therefore dependent on a person's point of view.

Heresi stand in Christian nomenclature of schism in that the former involves different in the Doctrine of the Faith , while the latter mainly deals with disciplinary issues and the question of church authority. It also stands for apostasy , which is a complete apostasy from the faith.

Heresy , and heresy is a term for beliefs or opinions that differ from established dogma. Another word often used on Norwegian is heresy . The term comes from a Christian context , but it can also be used for divergent opinions of other religions or political movements. The main topic of this article is heresy in the Christian context .

Heresy from Wikipedia: Heresy is the theological meaning a doctrine or a collection of those which are branded as false by a church authority.

The word heretic comes through between you German brackets from Greek katharos , meaning " the pure ," and was a name of the kata rob , a Manichaean sect that was much widespread in Western Europe in 1000 - and 1100s , and who was accused of heresy and persecution of the church. ( end of quote ) .

Trinity doctrine is no doctrine that is preached and taught the word of God , but was made by the Catholic Church and inherited by Luther and the Reformation in conjunction with other blasphemous teacher : Replacement Theology , the belief in an eternal torment for non-believers , baptism , faith on a Triad God etc. All this is something found in other religions as the Hellenistic belief, Egyptian mythology etc.

Why then is the Trinity heretic or heresy ? Coming short 10 points on this here:

1 ) It is a Catholic dogma teachings come from years . 3-600 AD briefly described at various church meetings. Where it began with the synod of Nicaea and ended with the Athanasian Creed. That really is an creed against the biblical doctrine of God . Therefore, it is expressly mentioned at a council at Autun in Burgundy in 670 It is directed against Arianism and emphasizes the doctrine of the Holy Trinity and the doctrine of the incarnation . Blasphemous creed is this part , especially the last, the Athanasian Creed.

2 ) Trinity doctrine is Catholic , and inherited from Luther and the Reformation.

3 ) There is a doctrine against what was taught in the Old Testament and what the Israelites believe in the great and all.

4 ) It is accepted Jesus teaching.

5 ) It 's against Acts of learning and teaching.

8 ) Those who believe in the trinity doctrine is usually naughty and always responds almost no questions posed to them when they feel like upstairs and down. Arrogance follows treenighetslærens footsteps.

9 ) The Holy Spirit is never mentioned in the Book with their own name or as a person, ergo it is a part of God.

10 ) I and Smyrna Oslo preach only what the prophet in the Old Testament taught. The same as Jesus himself believed and preached. And as Paul and the apostles preached and taught . We just continue on the same track and the same doctrine that Jesus and the apostles .

We only build upon and convey the same as Jesus and the apostles . The resistance we get , we justify that one does not accept the word of God .

Ephesians 2 20 I built up the apostles and prophets the foundation , while the cornerstone is Christ Jesus himself , 21 in whom every building FOIES together and grows into a holy temple in the Lord , 22 in whom you also are built up with the others for an habitation of God Spirit.