No. 693: 10 reasons because I do not follow Ulf Ekman in the Catholic church!

10 reasons because I do not follow Ulf Ekman in the Catholic church!

I have never been sectarian , party sinet or thought that I or "my " denomination has had the full and complete truth . But it is allowed to think that something is right and something is wrong . There are those I have confidence in , and there are those I do not have confidence . That Ulf Ekman converts and justifies this by saying that the Catholic Church has more of the truth a second for me is very applied , shallow and in many ways a lie ! But now Ulf Ekman always been a liar , and that he continues is only a continuation of an old rut . Ekman statement why he is a Catholic is probably the biggest lie I 've ever heard of a so-called Christian leader : " The Catholic Church has the most perfect expression of Christian unity ." To make such call-out must be strong and powerful deceived deceived in their faith !

Pope Francis 1 has of course its good sides . But anyway. As the Bible defensjon he is a false prophet, a false shepherd and has " tried " to all of God's Son space by adopting a " Pope - office " that is Anti Christian . Photo of the false prophet Pope Francis 1 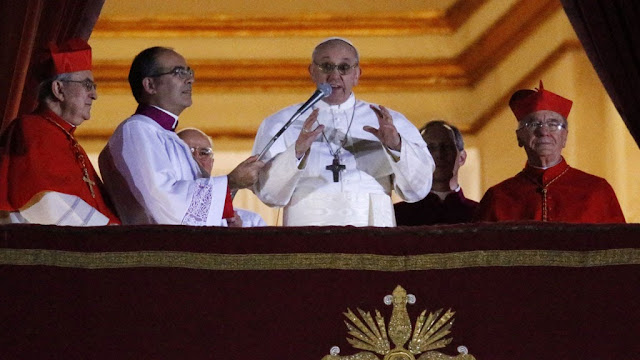 1 ) Ulf Ekman has almost always been wrong . So it is now. The man has led and erred all his life, so before , so now, unfortunately .

2 ) Peter was never in Rome, but it was the Apostle Paul. It was the one sorcerer in Rome before the Catholic church . Pope 's office is basically a continuation of this office.

3 ) The Pope will be God's representative on earth. This is so blasphemous and demonic learn that it is God's blasphemous . The Catholic Church states, "The Papacy instituted by Jesus Christ himself ." This is so far from the truth it is possible to get . Then by Peter confession from Matt . 16 from verse 13 Here we find the description of how the apostle Peter confesses his faith in who Christ is . Peter said to Jesus : " Thou art the Christ - the Son of the living God ." After Peter's confession , Jesus says to him : " And I tell you: You are Peter (Peter means rock ) , and upon this rock I will build my church , and the gates of hell shall not prevail against it . I will give you the keys whatever you bind on earth shall be bound in heaven , and whatever you loose on earth shall be loosed in heaven. "

Of course it was not Peter , but in his confession that Jesus is the rock and foundation . Not that Peter was a sinner who needed salvation just as much as everyone else. But Jesus , the Son of God , the Savior and Messiah.

4 ) The Pope speaks the words of God in the same way the Apostle and Prophet of God's word . This is just blasphemy learn as everything else within the Catholic Church .

This so-called Ex cathedra ( Petri ) doctrine is an insult to God's word and heretic teachings. You mentioned this doctrine :

Ex cathedra ( Petri ) , by virtue of the papal office , the term denotes that the Pope's teachings decisions on very special occasions considered infallible . But it 's not that the pope usually say or do , is considered infallible. According to 1 Vatican Council's decision of 18 July 1870 is the Pope , when he speaks ex cathedra "by the divine assistance promised Peter , strengthened by the infallibility of the Divine Savior wanted His Church should be stated at once it establishes the doctrine concerning faith or morals , and likewise the Roman Pontiff provisions in themselves, and not by virtue of the Church's consent , unchangeable . "

5 ) Denying people to marry , to get a service within its the Catholic church 's teachings of demons and seducing spirits says the apostle Paul.

1 Tim . 4 1 Now the Spirit speaketh clear words that in the coming times some fall away from the faith , as they hold themselves to seducing spirits, and doctrines of devils; 2 by hypocrisy , being seared in their own conscience , 3 forbidding to marry , and commanding to abstain from foods , which God created to be received with thanksgiving of them which believe and know the truth .

6 ) The Mary cult , saint worship , worship Pope 's By - God -worship of the worst kind . We should only worship God , no other.

7 ) The Catholic church has persecuted , tortured and killed somewhere between 50 to 100 Million people. The number is so large, bulky and ugly that there is good reason enough never to be Catholic.

8 ) The Catholic church is emerging as world's largest pedophile ring with all the revelations that have come out of sexuelle abuse of children within its church. This is not a local problem , and that only goes back in time. However, there exist everywhere, at all times and also in our time . Why ? The main reason is that they refuse priests , monks , nuns and other clergy to marry . This is real bad, more than enough to never become Catholic.

9 ) Through various church meetings so they instituted whole lot of heresy. Such as the Trinity , purgatory , eternal persistent burning hell , baptisms , and pray for the dead , erroneous perception of the sacrament, etc. The list could be even longer , stop here.

10 ) The Catholic Church is the state church , where both believers and non-believers go together. Scripture says very clearly that the church is a community only and exclusively only believers baptized members who are cleansed by Jesus' blood and who believe in the Bible and only one God , not more .

Psalm 1 5 Therefore the wicked shall not stand in the judgment , and not sinners in the congregation of the righteous .

Of course this is just a small overview of a very large and extensive subject . I personally have very great sense for many people, and KATOSLKE THE CHURCH AS A INSTUESJON . But from there to recognize it fully and that Ekman and family. Go in there having been a Protestant, it is for me both a folly and unimaginable. But today is if most acceptable? What is not possible I have to ask myself!