Artikkleforfatteren believe that Pastor Jan Hanvolds service that the glory and presence is not present in his meetings, in line with Eli and his sons, namely because of sin! 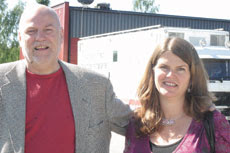 Said ... Eli the priest's daughter in law as she died during a premature birth after the announcement that her father and husband Eli, Phinehas his brother Hophni were killed .. She barely had time to give the new baby boy named Ichabod (which means no glory) - as she said: Not the glory departed from Israel, the ark of God was taken. Ark in the Old Testament was consistent with the tangible presence of God. See 1.Samuelsbok 4, 19-22. The whole chapter is worth reading and kap.2 we see that Eli's sons's sin was great before the Lord. 1.Sam.2; 12.17. They despised among other things, the others came to sacrifice to the Lord. It says that they were evil men, and knew not the Lord. Eli, their father and a priest - prevented them either. Though he was a priest in Israel. And God sent one of his men to reprove them for their sin, and tell them about the consequences. It was as he had said. (1.Sam.2, 30-35). Let us not forget that the Lord God has not changed. He himself has said. His view of sin and situations are the same even today - but we've got grace and forgiveness through His Son Jesus Christ's blood when we repent, repent and seek to do and live by His Word and will. He will constantly speak, lead and bless every single person living in, with and for His Word and will. By a sincere heart. "The heart is deceitful - more than anything else. (Jer.17: 9-10) - therefore we have the Holy Spirit - our helper, our guide and our spokesman. Listen to Him. So we can avoid our own heart's possible deceit ..

I see parallels to our time and our churches in the story of Eli and his sons .. Philistines, the enemies of Israel, had stolen the ark of God. The presence was gone because of sin. Eli's lack of intervention in connection with sin in God's house, I think is a good idea of ​​the present general church. This also confirmed the 4.Mos.25, 4 to take the leaders first .. (As I have said before in connection with the NT's light). Furthermore, in Ezekiel 34; v.1-12, and v. 15-22. God will judge both between sheep and sheep, between rams and goats (the leaders) and between the fat and the lean sheep. I say: "Sela" - something to think about .. Since the last article I looked at Sky blog now, so was Jan Hanvold enough once mentioned and pictured, and I would like to merge his vision and Norway in context here. We live in "the last days of the last time", and in recent times will be difficult, Jesus said. We are there now. ("THIS .. THAT is" like the disciples on Pentecost said the fire!). What I will say about it is that God does not regret either his gifts or calling. Therefore, it is possible to operate in the flesh and not spirit. Rom.11: 29 and would like 2.Tim.2, 13 as well! Namely, that if we are faithless He remains faithful so .. For He can not deny himself. Hanvold are born with a business talent. It may not be in doubt. I think personally that talent is something we are born with and that gifts are gifts we receive for salvation as appropriate. Hanvold has not "buried his talent" but rather as "doing his business with it" as Jesus said we should do in Matt.25: 14-29. (Too many people have buried their talents or experience that others have "put stones on their talent" - if I may say so - so it did not come into its own in this life. Unfortunately.). Therefore Hanvold continue as he does .. But personally, I find that the glory and presence is not present in his meetings, in line with Eli and his sons, namely because of sin. And it is in line with the Jan Kåre writes about the Bible's message about the demands of today's "clergy", that is the church's leadership as shepherds (pastors) and the oldest.

I have no problem drawing parallels here to much of today's untimely money market also, on Christian television in the U.S. and now here .. It is allowed to ask themselves, God and these leaders on how money is spent. On the right way, or if they "stick their forks in our offerings of meat in their pots" .. "Selah". When Israel wandered in the desert and they were manna from heaven, as it says that the total amount should share with those who gathered little and that was gathered only for a day and only collect twice on the Sabbath .. See 2.Mos.16, 16-23. See also 2 Corinthians 8; 12-15! About this. I have lived in the U.S. in my younger years. And worked there. After I was born again and grew faster than the church leaders knew at the time, so I turned my eyes to American television ministries and have been to many many of their conferences and participated in various "anointed" and "get-the-same- anointing-as-I-have "queues .. The last 10 years I have had access to a dozen U.S. Christian TV channels such as TBN, Church Channel, JC-TV (for young people, who Hanvold now negotiating to bring in here, and it is with rock music and many other and to us unknown per mm.) And INI and Word channel in addition to the Gospel channel and Now even modest channel 10 in addition to Vision Norway. In addition, various Catholic and Adventist ministries channels .. I mention it only because the one who reads this to know that I know what I'm talking about. I've also been a "partner" with any of these and the Lord allowed me to go into it, and then lead me safely out of it again with a host of dearly bought experience that confirms the Scriptures and reveals the deception. This now comes into our living rooms via the Vision Norway. Therefore TRY EVERYTHING - and hold fast to the good. Otherwise, the Christian television program intended for unbelievers and not Christians. Believers "will not stay away from their own congregations as some have a habit of" Hebr.10; 25! . And if we continue to read verses 26 and 27 also so speaks clearly that we can not possibly go on sinning after we have learned the truth! For it is no longer any sacrifice for our sins back and they can not possibly converted to renewal, since they again crucify the Son of God, and brings him to an open shame. in Hebr.6; 4-6. Read yourself. Let us therefore heed the Scripture so we can stand in judgment!

I can also point to Saul and Samuel as an example here. In 1 Sam.10, 10 Spirit of the Lord comes upon Saul in Samuel's words. But kap.19; 22-24 prophesied Saul while he stripped naked, which is an ungodly act as incompatible with the Holy Spirit. Because we can read the chapters in between here that Saul disobeyed the Lord's Word and an evil spirit (16, 14) from the LORD troubled him. He prophesied when he was in communion with those anointed by Samuel and David Rama but also manifested the evil spirit himself when he stripped naked. I'm not going to get more into this right now, but let me say with Samuel at 15; 22-23 that V.22: "Hath the Lord as much delight in burnt offerings and sacrifices as in obeying the Lord? Behold, to obey is better than sacrifice, responsiveness is better than the fat of rams. "(My comment is that the fat of rams can be used as an image of anointing and we see in this case, that obedience is more important to God because it is our personal choice and readiness, while the anointing is something he himself has given to us). Furthermore, in v.23a: "For rebellion is the sin of witchcraft, and stubbornness is as idolatry ..............."

Finally, a recent example that helps to prevent the Spirit of God, presence and manifestations among us - namely, when a servant of the Lord begins to take the law into their own and have offices in the house that they are anointed and appointed by the Lord to do , namely, so that King Uzziah did 2.Krøn.26, 3-21 namely to threaten themselves to a ministry when he was appointed and anointed to be king and not to the priest. Verse 16: "But when he was strong, he was overconfident in his heart, to his own destruction. He was disobedient to the Lord their God, and went into the sanctuary of the Lord to burn incense on the altar of incense. "When he was leprous in his forehead (v20-21) representing a view of our lives - and were therefore excluded from the house of God. "Sela" I say .. (Think of it).