The world people are more honest here when they talk about this openly. While God's people let it take place in secret but will and do not want to take this up and trying to conceal the murder, but it is to tie in the death of sin 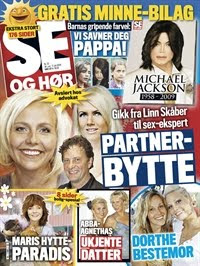 As a Bible teacher, I am shocked to see the weakness that prevails in almost all Christian denominations in Norway, not least in my own context, religious movement. Ever since I went to Word of Life Bible Center in Uppsala in 1987/88, I was wondering why the paradox that those who claim the Bible's inspiration and authority in accordance with God's own Word, and has such a liberal view and practice when it comes to divorce and remarriage. Admittedly, Ulf Ekman put up strong and called the idea of ​​divorce as "anti-Christian and secular" (Video of the Month December 1989), but the practice still has unfortunately been another, without it due to load Ulf Ekman. Kenneth Hagin, which I previously considered to be the perfect Bible teacher, has dropped dramatically in my reputation in recent years. I have managed to raise me above the blind devotion I had to Hagin (although he has a lot to add) and make me critical of the things in his teaching that is directly heresy. This includes those connected with the view of women and family life. The otherwise very literalism Hagin is out and running when it comes to these matters, including the relationship divorce / remarriage. Some close friends of mine who has gone to the supermarket Bible Training Center in Tulsa, Oklahoma, was shocked at how overwhelmingly large proportion of students there who were divorced and remarriage, without anyone questioning it. Being a Christian means to be Jesus Christ's disciple. Jesus said that a disciple should be baptized and be trained in "all that I have commanded you." Today the trend is that we explain away Jesus' clear words to fit the Bible into the spirit that has crept into all the churches to a greater or lesser degree.

We should all be aware of Jesus' confrontation with GT and Moses liberal divorce practice: "So they are no longer two but one flesh. What therefore God hath joined together, let man not separate. They said to him, Why did Moses then command decided that one would give his wife a certificate of divorce and divorce her? He said to them: Because you have so hard a heart, allowed Moses that you put away your wives. But from the beginning it was not so. But I tell you Whoever divorces his wife for any reason other than fornication, and marries another woman commits adultery. And whoever marries a divorced woman commits adultery. disciples said to him: Is the man be so with his wife , it is not good to marry! " (Matthew 19:6-10).

It is clear that Jesus innskjerper divorce and remarriage practices in such a severe degree that the disciples are shocked! Rather than reassure them and explain that it was not meant seriously, Jesus begins to speak instead about encouraging people to abstain from sex for heaven's sake!

Today I can say that about. half of CHRISTIAN marriage fails, and that in many cases, as toxins Mon themselves again without reaction or made public at this question from the leadership side. Statistics show that today is the woman in 75% of cases initiates the divorce. The man will be to our society the big loser, where he in addition to being cut off from life with his wife, also loses the natural companionship with the children, and lose the house and often ends up as an economic loser.

You can see some openings for divorce and remarriage in the NT, but they opened the limitations seem to be unknown to most people. Notice that Jesus said that a man who sent away his wife, that takes the initiative to divorce, unless she has committed adultery, are not allowed to remarry. AND: the innocent wife has ended up HOWEVER not allowed to marry again as long as her first husband lives! This may seem unfair in our eyes, but who are we to judge God's Word? This teaching is emphasized by Paul in 2 places, in Romans chapter 7 and 1 Corinthians chapter 7: "For the married woman is bound by law to her husband as long as he lives. But if her husband dies, she is released from the law that bound her to the man. Therefore, she called an adulteress if she, while her husband still liver, is another man's wife (not just cohabiting). But if her husband dies, she is free from the law, and is no adulteress if she marries another man. " (Romans 7:2-4). The same quote is found in a short form in the 1st Kor. 7:39, and it leaves the relationship is no doubt that this is something that comes in the Christian church.

Moreover, we know how liberal it was, according to the law of Moses, so this is without doubt a New Testament interpretation of the Marriage Act on the basis of Jesus' teaching. Now to something startling: If we study closely 1 Kor. 7, we find it striking that Paul does not equate men and women's right to remarriage: "A woman should not divorce her husband. But and if she depart, let her remain unmarried, or be reconciled to her husband (come back to him). And a husband must not divorce his wife. " Oddly enough, Paul does not write about the man that he should remain unmarried, as he writes about the woman.

We saw earlier that Jesus forbade him to marry again with another woman if it was not HOR in the picture (that is, that his first wife at one time or another have had sex with a man other than her own husband). If there has been adultery in the picture, it appears that the man (not woman) are allowed to remarry. This seems to be Paul's teaching in 1 Kor. 7:27-28: "Are you bound to a wife, seek not to be free. Are you not bound to a wife, then seek not a wife.

But if you marry you, so you do not sin. And if VIRGO (not the divorced woman whose ex-husband who still lives) get married, so sins she did not. "Practice today is that we are growing apart, take out the divorce and find a new life partner, sometimes within the same church! This is what in the world calls a partner change, albeit in a public disguise where apparently legally married. But Norway's laws can not be God's own universal laws. So sorry: Many of those who today are remarriage live in adultery according to Jesus and Paul's words, and Paul warns that no one living in adultery shall inherit the kingdom of God. Dare we play lotto with our own and other people's eternal destiny?

What type of Christianity is the Christians who love one another as Jesus loved us, and even to love their enemies, pray for them and bless them, unable to live together in a marriage? There intransigence and unforgiveness are accepted in the church's midst, and hormones have taken place for the fear of God, where have the right to call themselves the Lord's name? I know this is a sore area and the tremendous emotion involved, but exactly why you must NEVER take in his mouth threats of divorce against her husband. This has a tremendous effect and infection spreads rapidly from family to family, as we see in our country as never before. Should not Christians be light and salt?

But if salt loses its savor, then cut it for nothing but to be thrown on the ground and be trampled by people, said Jesus. If in the unfortunate situation that you have gone from one another, seek to be reunited with your spouse that you have promised fidelity until death do us part!