Nr. 283: Baptism in the three titles do not match the whole word of God and can not be accepted! This is a common interpretation of a rule!

Baptism in the three titles do not match the whole word of God and can not be accepted! This is a common interpretation of a rule!

Scripture teaches that everything we do, even to baptize, we shall do in the Lord Jesus Christ. Jesus Christ is Christianity's center and the center, so everything should be in his name 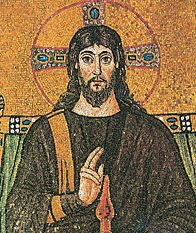 From my commentaries File. 2. 9 Therefore God has highly exalted him and given him a name above every name, Since he was so humiliated he was also raised. God has already elevated him but unfortunately I do not see most people, but we as believers see it, Hallelujah. Jesus has a name that is greater than everything. Disease, problems and afflictions, Kings, Presidents and all other names and titles! 10 for that every knee will bow in the name of Jesus, in heaven and on earth and under the earth, All present in the sky bent enough for Jesus after his return, except the Father. But one day the whole earth to do it. Under the earth must be understood by all people who are dead and all the demons, Satan himself will one day bow to Jesus and had to admit that we saved already do, Jesus is Lord! 11 and every tongue confess that Jesus Christ is Lord, to God's glory! Now I mentioned this already in v.10. But to confess Jesus as Lord is a sign of one is saved and born again. When Jesus is Lord there is none beside Him as Lord. Idols, head of state, religious founders, other talented and capable people, but they'll never n near Jesus because He is King of Kings and Lord of Lords (Åpenb.19.16).

Psalm 119:160 The sum of Your word is truth, and forever is all your righteous law firm. "Truth is so obscured in our time, and the lie is so good that one can not know the truth again, unless you love it." - Blaise Pascal

This is something that the Catholic church has changed and added that they have done with other sections of the Word of God must be, when they tried to remove the Great Commission in Mark to get rid of Jesus name. Then they can do anything: Matt. 28. 19 Go therefore and make disciples of all nations, baptizing them in the name of the Father and the Son and the Holy Spirit.

The right are: Matt. 28. 19 Go therefore and make disciples of all nations, baptizing them in in my name (Jesus said).

Here is an example of the falsification of God's word for it to vote with the unbiblical doctrine of the Trinity: Theologians have pointed out several places in the NT to support in their view that God is three, three people. Father, Son and Holy Spirit-who are together in a god. This dogma is not particularly emphasized in the Bible except in some later texts other than in the first Epistle of John chapter 5 verses 7-8 Through the Latin Middle Ages it was believed that the text said: There are three that bear witness in heaven. Father, the Word and the Holy Spirit. Ah here it is, the dogma of the Trinity. But this is found only in the Latin manuscripts. Absolutely not in the Greek manuscripts of the NT. Since the New Testament of the Greek manuscripts were published in 1516, a scribe named Erasmus did not include these verses to the great hubbub of his theological opponents who maintained that he had a mischievous way removed from the Trinity Bible. Erasmus replied that he could not find this part in some of the Greek manuscripts he knew. And here goes the story. He challenged his opponents to produce a Greek manuscript of the Trinity. If they did it, he would include it in the next edition of the NT. In response to his opponents produced a manuscript or at least they got a produced. Some copied John's first letter from the Greek and added these verses, and presented them to Erasmus. As the honorable man he was, he included these verses in the next edition. It was this version that became the basis for the King James version that became important in the historical Bible in English. These verses are still in the King James version but not in newer and more reliable translations. This is why an older generation of readers of the English Bible was assumed that the Bible taught the dogma of the Trinity, even though this is not found in any Greek manuscripts in more than a thousand years. So what is most reliable? The Greek manuscripts or much later Latin? Now let this be very clear, I stick to the original Greek manuscript. Then one must reject both the Trinity and Jesus alone doctrine and belief in only one God, the Father and that he only has only begotten, Jesus Christ!

Studying this one with the meaning of the name is found first, that in all the other gospels, this is the key. That we should preach and baptize in the name of Jesus, not in three titles, or three denominations. Markus 16 17 And these signs shall follow them that believe: In My name they will cast out demons, they will speak in tongues. Luke 24 47 and that in his name to be repentance and forgiveness of sins proclaimed to all nations, beginning at Jerusalem. John. AD 20 31 But these are written that ye might believe that Jesus is the Messiah, the Son of God, and that ye through faith may have life in his name. We see all the time that it is in the name of Jesus everything is done, not in any titles or designations. And indeed it is trying to become removed from Mark's 16 on this name where it says that we must first have faith that one should be baptized. Completely against what the Catholic church believes and practices. Why is it not so properly and in accordance with other authors in Matthew? There is only one logical explanation, it's been changed since the Catholic church really was the only approx. years 300 - 1500's, when the Reformation began. They had autocracy for approx. 1300 years and then on everything! Here are the scriptures that show the name of the first Christians baptized: Ap.gj.2.38. Peter replied, "Repent and be baptized in the name of Jesus Christ, every one of you, that ye may receive forgiveness of sins, and ye shall receive the Holy Ghost. Ap.gj.10. 48. So he ordered that they should be baptized in the name of Jesus Christ. Then they asked him to stay with them a few days. Ap.gj.19.5. After hearing this, they were baptized in the name of the Lord.

The fact that the early Christians, that baptism is the first after one has come to believe is a far out when we go to our source, God. It says in Mark 16.16 He that believeth and is baptized shall be saved. But he that believeth not shall be damned. First, we believe, then baptism by immersion.

When treenighetstitelene as Father, Son and Holy Ghost are not used elsewhere, we must reject it as biblically correct since it is the sum of the Word of God is guiding and showing the norm.

Psalm 119:160 The sum of Your word is truth, and forever is all your righteous law firm.

All the places it says about baptism, which is at least ten (10) sites are not the Trinity the titles mentioned a single place, but it is only the name of Jesus Christ. Therefore, we never baptize three titles but in the Lord Jesus Christ name, Amen! I have already mentioned the three (3) places it says about baptism in Acts and can name some of the baptism and the three (3) places in the Gospels it is directly or indirectly on baptism and preaching was always in the name of Jesus Christ. Here are some scriptures to that discusses that baptism should be in the Lord Jesus Christ as it is to his death, endowment, and resurrection symbolizes baptism that we are in. We die with Jesus, we are buried with Christ and rise with Jesus to live for God, and no one else in this world, Hallelujah! Rooms. 6. 3 Or do you not know that all we who were baptized into Christ Jesus were baptized into his death? 4 We were therefore buried with him by baptism into death, that just as Christ was erect from the dead through the glory of the Father, so also we should walk in new life. 5 For we have become united with Him by the likeness of his death, we will certainly be so by the similarity of his resurrection. Eph. 2. 4 But God, who is rich in mercy, for his great love with which He loved us, 5 made us alive with Christ even when we were dead in sins - by grace are ye saved - 6 and raised us with him and sat with him in heavenly places in Christ Jesus, 7 so that he in the coming days might show his exceeding riches of grace in kindness toward us in Christ Jesus. Kol. 2. 11 He in whom I and was circumcised with a circumcision not made with hands, by avklædningen of the flesh body of Christ's circumcision, 12 as I was buried with him in baptism and in the upright and I was with him through faith in power of God, who raised up him from the dead. Gal. 3. 26 all the sons of God through faith in Christ Jesus, 27 for I, as many as are baptized into Christ have you iklædd Christ. 28 There is neither Jew nor Greek, there is neither bond nor free, there is neither male nor female: for ye are all one in Christ Jesus. 1. Pet. 3. 20 those time past had been stubborn, then when God's patience waited in the days of Noah while the ark was built, in which some few - eight souls - were saved by water, 21 there is also now save us in his motbillede, baptism, which is not is the issue of the flesh unclean, but a good conscience toward God by the resurrection of Jesus Christ, 22 who is gone into heaven and is at God's right hand, where angels and principalities and powers subject to him. We see here that there is faith and baptism which goes hand in hand and everything will happen in the Lord Jesus Christ who also teaches writing. Me and the word of God rejects entirely the Trinity formula, it's probably a Catholic tilsnikelse not measure up when we see the totality of God's word and what scripture teaches about faith and baptism as a whole, we must as much as possible never blend into the demonic treenighetsbenevelser when it leads us into the occult and spiritual darkness and death!

This is my slogan and the Bible:

The name above all names is Jesus

The song from the sky with life and hope from the Savior make the sick well and strong again For Calvary victory and words of faith from the Bible brings life and health; freedom and salvation of our God

So tear yourself away and put on the swim in dobbeltbekkens strong power Let the power of the Lord make the dream Flow with the Spirit's fresh wind, praise Him with your mouth and receive life and health, freedom and salvation of our God.