No. 1615: Malin Strømberg Amble, Øystein Hermansen, Jan Aage Torp, police have "a pragmatic relationship with truth" and would distort the truth in order to adapt it to their purposes. This is briefly lying!

No. 1615:
Malin Strømberg Amble, Øystein Hermansen, Jan Aage Torp, police have "a pragmatic relationship with truth" and would distort the truth in order to adapt it to their purposes. This is briefly lying!

First, an explanation of what the word pragmatically means from Wikipedia:
"Pragmatism" has more meanings. Pragmatism is a direction in the philosophy that was dominant in the United States in the first part of the 20th century.Pragmatism is based on the principle that the usability and practicability of ideas, policies and proposals are the criteria to be measured with. Pragmatism emphasizes that action must be given priority over doctrine and that experience should be given priority over established principles. Pragmatism believes that ideas lend their opinion from their consequences and their truth from how they can be verified. Pragmatism believes that ideas in essence are instruments and plans for action. "

To me, it means that one does not really seek the truth, but what is "best" for the result one will achieve!

The word pragmatically I think is fairly adequate for the way I have been treated by the Norwegian judiciary.
They have been dishonest against me at all levels. Simply lies, untruths and factories that are now in the judgment. Not the real truth!

I'm aiming for one thing. Written as Jan Aage Torp that he is an adulterer, a leper and a psychopath.
When the negotiations were concluded, I received a lawyer who saw the caveat in this and supported by other lawyers have been concerned with only one thing.
It is the law itself. The paragraph that is used to me, it is laid down and does not fit into the matter between me and Torp. In other words, they exterminate the law and in many ways break the Norwegian law by referring to section 390a of the Criminal Code. But as said, this is the word of justice of the times!

When we look at the second referee from the judiciary in this section. Then people are encouraged to think something public, but do not take personal contact.That's what makes it punishable, but here they are all about me, even if I have never contacted Torp once. Only written on own blog, but as said. This is Norway's greatest miscarriage of justice when I am 120% innocent in this matter, but it is not the police, judiciary and Torp, they are obviously criminals, liars and cheaters in this matter!

When the verdict fell in Oslo district court I was sentenced for something that the court has not discussed, discussed or really reflected on. That is the amount of writing.

Then the whole thing is against me a word of justice from the beginning to the end!

Had a discussion about why one has written so much about Torp, and the background for it all. Then been judged, then it would have been fine. This has not been done.

Now the last and only way out is the appeal to the Human Rights Court in Strasbourg, France.

In this case here, it's a judgment ala Congo and North Korea!

This I have written about here, read yourself and this is, as I said, very, very last opportunity and court of law!

No. 1600:
50,000 we have now received to pay anything for my case to come to treatment for Human Rights in Strasbourg in France, now it is really a matter between my lawyer and the Norwegian state!

Picture of the last invoice for my Attorney Brynjar Meling as with the help of God and their support has now been paid! 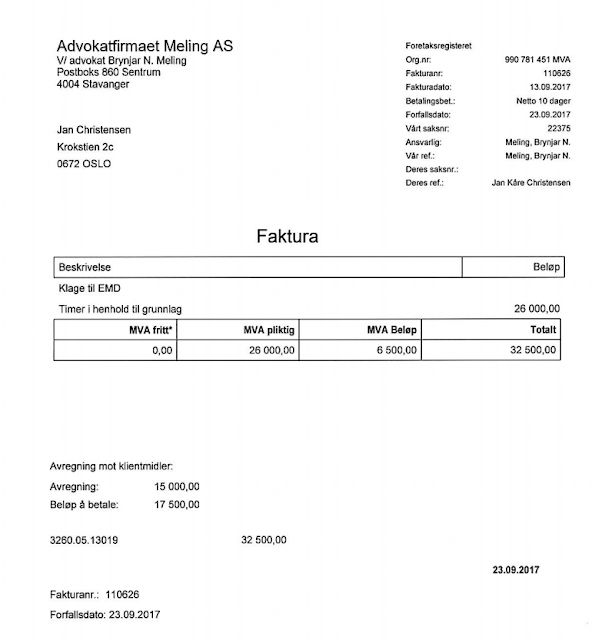 Now everything is paid, and the appeal should be sent to the Court of Human Rights in Strasbourg in France.
Wish to thank you all who have been involved in prayer, support and financial assistance. It warms and makes this much easier than you or you did not agree with.
After all, we are in front of Norway's greatest justice of justice. The actual case against me stinks it off.

They aim for one thing, debating another thing in court (law enforcement).
And judge me for another thing that I'm not charged with or have been dealt with in court (the amount of writings).
Of course, Norway's story is the worst justice word in the sense that I have never defended myself for what I'm convicted of.
M in defending've never been asked about this, why it has been written and spoken so much about the criminal Jan Aage Torp who have made false accusations against me and the Heavenly blog.
It was his enormous hatred for my preaching against reprimand that forms the basis of everything in this case! Believe anything else is to believe in lies!

Will come back with more fabric when the appeal is sent!