No. 940: The fraudulent newspaper Our Country and the "new" blog who have stolen our identity speaks of a very sick person who basically need help immediately!

The fraudulent newspaper Our Country and the "new" blog who have stolen our identity speaks of a very sick person who basically need help immediately!

It happens so much that I here will only come with some considerations and thoughts regarding two things. It is the fraudulent newspaper Our Country and the "new" blog who have stolen our identity speaks of a very sick person who basically need help immediately!

After what people who have gone in Oslo church says, then it is to call people for demon Torp meant I was completely "normal". Anyone who disagrees with him and who stand in his way there.

Ia so there was a lady who really needed help, but Torp did not like that he chased and dragged out of the meeting. When he was asked why he did this so the answer came that she last a demon who could influence others.

Talk about unbiblical view of humanity and bad treatment and phraseology against the poor who needed help and care. This should be a public Pastor and Apostle, I do not think is a Jesus apostle, but a false such!

Illustrative image of me as Torp comes with many of its patron contrary, but deletes the rule afterwards. This is the police's job to find out, or so it is Christianity persecution / justismord that they put up against me. And it's strange, then Torp actually comes with far greater verbal statements responds no, when everyone knows he does it to seek attention. When I do the same, so all screaming for. Why? They know it's true what I both writing and speaking, therefore, it will not be tolerated. Just like Jesus: 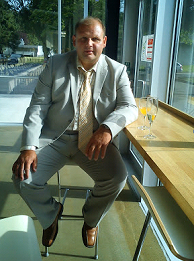 The new blog that goes out of a thing to write lies, exaggerations and fabricate stories interspersed with some truth bears witness to a very sick man. The police have an evil eye to me and fails to act, testifies an unprofessional police who really do their job.

They have not undertaken any and been removed blog and punished person and everyone else who has assisted Torp to defame and harass us. Has sent everything to the police, but do not expect help from there when they walk around with an evil eye on me even though they are obliged to do a job that they obviously do here! But I can tolerate that people write shit about me while I know it's not true!

The battle between me and Torp is really something between Jesus and Barabbas, but Barabbas here is obviously Torp who have been doing things all my life as clearly classifies him to be a false apostle or a "Barabbas."

The apostle Paul said that after his demise should such come in and mislead people:

Acts 20. 29 For I know that after my departing shall grievous wolves enter in among you, and they will not spare the flock. 30 Even among their own will raise up men who go with false doctrine to get ripped disciples with him.

This applies Torp but also really thousands of other so-called preachers, not least within its current Pentecostal Charismatic movement there lies, manipulation and false and strange doctrine prevails reason!

It is lovely to lay down to sleep with a good conscience every day!

Of course I have and I do like all other people my mistakes and missteps. But anyway, I have everything resolved with God and people, and there is no clear passages from the Bible that testify against me. I am such. a woman's man, not re-married as Torp which disqualifies him to be pastoral and preaching. Only here will Torp disqualified. That is until we have included all the rest, which makes it as a great sandwiches list against Torp / Barabbas, but so was also Barabbas a robber who was on the wrong side of both the word of God and act as Torp also to have come up with false accusations against me. Unless he is convicted in Norwegian law when police toys blind man's buff, so will your sins find you the scripture says.

Taking with everything else with him, and I only know some of this. And there's more than enough to know that we have a manipulator and one that operates far utforbi what is true and healthy evangelical preaching and ministry.

Torp prophesied example. that all of Athens would go up in flames etc. He has gotten people to give money so they do not have their own place to stay afterwards. But the person should have money that he had exhausted afterwards. This is directly narcissistic. And he has gotten people to hyperventilate so it would look like they were influenced by Torps demons and have driven them out. This is also very dangerous when people can suffocate, but this tells us that it is typical psychopathic traits in a person who makes you do something like that. Here I could have continued. Taking an all prophecies that have come over him and nothing happened, so we know that we obviously have a not true, but false apostle!

The newspaper Our Country appears more like a tabloid newspaper one that a true Christian newspaper!

Eg. when they wrote about me and Torp last year and now again this year as they try to put me in a bad light possible, do not produce and reproduce what I would have said. They emphasize what is in the periphery and I do not emphasize.

But what is important for me to convey is that Torp is a false apostle, adulterer and fun last. It mentions than not. And try to understand what I want to say, and why, it is a not the least interested in.

Torp's own verbal expression and representation against me and all others are far more serious than what I have made against him. Why mention than not it?

National Association of Lesbian and Gay Liberation (LLH) reported the false apostle January Aage Torp because he preached that gays are a cancer in society. Which also must and will be removed. I've never been close to call someone for something.

But when Torp even sitting in appeared, but being divorced. Suddenly it is allowed to break the Word of God - for he. Here again we see what moves Torp has that person. All others should keep the word of God, but not he. He can freely allowed to do what suits him, he is above God and His word. This is the psychopath in Christian "costume"!

Matt. 7. 1 Judge not, that ye be not judged! 2 After judgment ye judge, ye shall be judged, and in the same measure you measure up, it shall be measured back to you.

Here Jesus says that Torp should be judged by the same measure that he judged the homosekuelle. Just what makes me so sure that this case will go to victory.

Torp has condemned all nedom and homes. But when he himself trapped there, then he screams to, tragic!

I live a very happy and successful life. Have stable relationships around me. Going to work every day and have the same spouse. Trainer and working for the Lord. Can I have and make it better? Hardly!

It was very strange this with the article I wrote here:

It was only actually later that day I learned that Torp-law had lost the house on fire. Then I read it in Searchlight. I do not put anything more in a that I did not believe this was a coincidence and that there is a warning that God he is able to let everything happen, both positively and negatively. We have a God to do that is both good and rigorous. Therefore we can not do as we wish. We must align ourselves what he himself has said in his own words. And those who profess his name and to be preachers can not be diffuse and be excused for taking his words carefully. But really put themselves in "Sælen" and take up his cross daily and follow the Lord. Capabilities than not, so it is better to find something else to do, there is no human right to be a preacher if one is not able to practice the word of God in their own lives and apply it there!

Conclusion: Torp has really come up with verbal words and expressions stronger than me. But why do I get such reactions but not Torp?

I know the answer, you know? That's because I hit into the heart and conscience are wary, but it comes with Torp is from a man seeking attention!

The police believe in him, and his false accusations against me. It also tells her about Our Country depicting matter between me and that Torp is the victim of a witch hunt, etc. But that's exactly what he has been doing against everyone and everyone throughout his adult life, he is almost as expert reckoning this area!

This we now see is really Christianity prosecution / judicial police try on. But I am sure of one thing, they will never be able to reach! And when they appear, they will still lose! No one will go unpunished against God and his word.

For that is what this is about, that one should be allowed to preach directly and freely that remarriage is sin for Christians!