No. 950: Kenneth Copeland - the Pentecostal-charismatic leader's Guro is even re-married for the third time! How can he be a pattern to the flock as though living in sin?

No. 950:
Kenneth Copeland - the Pentecostal-charismatic leader's Guro is re-married for the third time! How can he be a pattern to the flock as though living in sin?

After "dady" Hagin (Kenneth Hagin) died so well Kenneth Copeland the closest one could call a leader of the Pentecostal-charismatic part of Christendom?
At least, he has big, big influence with his third wife Gloria Copeland.
Photo by Pope Frants 1 here surrounded by Kenneth Copeland (who is also divorced and married for 3 time as Hanvold, his third wife Gloria Copeland) being as a small boy to enumerate welcomed Pastor Jan Hanvold when Pope has after all has both moral and integrity. Hanvold missing in fact absolutely everything, sad but true.
Bishop Tony Palmer that sits right next pope right side died shortly after this photo in a motorcycle accident. We are dealing with forces that I would not recommend. Remarriage is and remains adultery based on the word of God, anyway!
(NB: first-class Italian both red and white wine on the table). 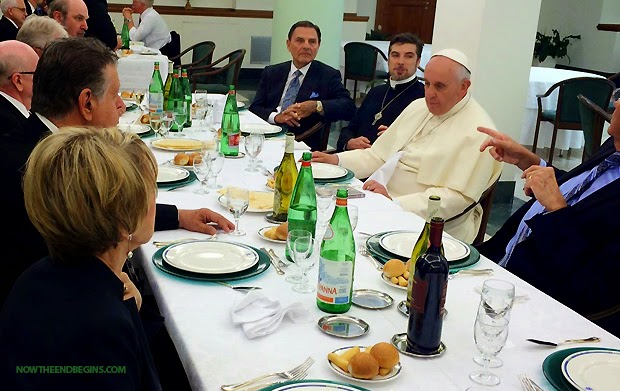 Here a few words about Kenneth Copeland. His first wife was Ivy Sandra Bodiford Copeland as he also has children. Married mid 1950's. While his second wife is not known whether he was separated from or divorced from to marry Gloria Copeland as he was totally in love with what he himself writes.
Cynthia Ann Copeland is the uncertain how he was separated from. But anyway, as a servant of the Lord is everything with and around this Kenneth Copeland indecent, undignified and totally unbiblical.

Do you believe in some preachers in religious movement - so you get the whole "package" with the spiritual power, sin, heresy and all that is unbiblical and seductive. Therefore, stay as far away from this as possible.

Here from the network which has been written about Copeland.
From whilst we Pending:
We have the same power as witches, says Benny Hinn.

None of us is given the task to judge anyone. All believers are, however, invited to know the Scripture, so that they can detect and judge whether teaching and preaching is biblical. Meanwhile, all believers given the task to lead others from false doctrine to Bible truths. The prophets, Jesus and all the apostles sought to help people from the false to the true, by identifying both truth and error. The same must present believers do, because the Bible says that in the end will Christendom flooded by false prophets with unbiblical preaching. God did not send them.

Some of the quotes you will read here, we mentioned earlier in MVV, but this time they are taken from the booklet Focus on Faith Movement, Fred V. Hjortland, adr. Svartholvn. 38, 1404 Siggerud. The quotes are from literature or speeches at very famous religious movement preachers, among others Kenneth E. Hagin, Benny Hinn, Kenneth Copeland, Morris Cerullo, Robert Schuller, Ulf Ekman, Åge Åleskjær, Paul Crouch, Fred Price, John Avanzini, Robert Tilton. Read the quotes and ask yourself the question, is this teaching of Jesus? We include these statements, along with an appeal to pastors cited, and to all who have listened to their forkynnelse.La us return to the Bible's true gospel! Jesus is coming soon, and we must not let Satan deceive us with a doctrine that destroys salvation experience. The Bible is the source of all truth, not gnostic and occult ideas that some have introduced in the Christian message.

· God ... is a being that measure approx 1.80 to 1.90 in height, weighing something close of 100 kg. And in which the distance between the thumb and little finger of approximately 23 cm. (Kenneth Copeland in; Spirit, Soul and Body, page 1.)

· Jesus is no longer the only begotten Son, (Copeland, Now we are in Christ Jesus, p. 24.)

· We are small messiahs. We are all Jesus ever was, (Benny Hinn, Quotes for third wave leaders, p. 30.)

· God must get permission to work on the ground on behalf of the people .... Yes, you are in control! So if you have control, who is it that no longer have it? God. (Fred KC Price, quoted in the item; Church at the crossroads.)

· God's whole purpose was to reproduce itself ... you do not look at Morris Cerullo, looking at God, you look at Jesus, (Morris Cerullo, The end time manifestations of the sons of God, tape 1, page 2.)

· The Bible says that He has left us an example so that we should follow in his footsteps. That's why I drive a Rolls Royce. Following in the footsteps of Jesus. (Fred Price, An Examination of the Word-Faith Movement, Richard J. Vincent, 1991)

· Those who ask God to do something with the Devil, wasting time ... if the believers are not doing anything with the devil, so nothing will be done, (Hagin, The believer's authority, p. 19.)

· We Christians have power in our mouths to heal or kill, just like witches have it (Benny Hinn, Quotes from third wave leaders, page 30.)

· I do not think anything has been done in the name of Christ and under the Christian banner that has proven more destructive to human personality and therefore contrary to our evangelical mission, than the raw, strange and un-Christlike strategy that aims to make people aware over their lost and sinful position, (Robert Schuller, one of the keynote speakers during the church growth conference in Oslo in May 1994.)

· I know there are many who get nervous when we cry, jumping and screaming. But if my God in heaven roars, then, I also intend to roar, (Ulf Ekman, The Lord is a warrior, p. 126 and p. 116. He says on p. 117 that he learned to pray in Tulsa, ie pray for hours without using reason and thought, no petitions, just sounds.)

Hagins books make up the literature on the Bible to Åge Åleskjær. It cautioned not to Hagin, but he lifted the place up as the great prophet and Bible teacher. Of the 32 books that were curriculum in 1994, was 16 written by Hagin.

The question of whether he (Åge Åleskjær) have not had any objections to what is learned here (in Kenneth Hagin), answer him with a very definite no. (Our Land. 1 / 6-85.)
(End of quote).
From apologists:
News apologetic

In Åge Åleskjær leaf "Richer Life" no. 5, 2000, describes his son, David Åleskjær, book "Good Morning Holy Spirit" by Benny Hinn as "the wonderful book ... which I highly recommend." Apologists will in turn warn against this book. Maybe we can come back with a book reviews in a later issue.

According to Ulf Ekman leaf Magazin (13 / 10-00) prophesied Benny Hinn over Russia in a series of meetings in Moscow quite recently. He said that the number of Christians would be tripled in five years. Well, in 2005 we will be better able to assess this statement!

August 24 to 26 this year held Benny Hinn a major conference in Brussels. Ulf Ekman was one of the speakers. (Source: Newsletter of the Word of Life, 3/2000). Ulf Ekman has thus closely with Benny Hinn. For the enlightened believers this is an interesting piece of information to take with them.

Did you know that the preacher Ole Fredrik Steen in 1994, a year in Kenneth Hagins Bible in Tulsa, USA? This he describes himself on the cover of his booklet "God's Israel - your roots" which was published in 1999. On page 62 of the booklet until after he thought that Jesus might "held a revival meeting in hell and a jubilee meeting in Paradise on the night after the resurrection . " Personally I can not see that the Bible provides a basis for such thoughts. Human destiny is decided in this life. No getting any second chance in hell. Hell is no place for revival meetings! Moreover hell identical with God's future judgment. No people are cast into hell before the Last Judgment.

Knut Sørsdal publishes a small magazine called BKI-new (magazine for Church Growth). In no.6, 2000, he writes that "Benny Hinn and his organization are an important part of our intercession." Benny Hinn TV show "This is your day" - which, incidentally, are mediated by Evangelisenterets local TV - get positive publicity. So does TB and Pensacolavekkelsen. Personally I am convinced that this little magazine is certainly not help to bring people into what is good and healthy and who truly comes from God.

In the US, several famous religious preachers joined forces to form a joint web page named CFAITH.com. Kenneth Hagin, Kenneth Copeland, Jesse Duplantis, Jerry Savella and Creflo Dollar are some of the names behind the enterprise. It is interesting to see how Kenneth Hagin in his magazine "Word of Faith", in October 2000 giving the accolades of these men. He calls their real branches for "Well-respected ministries" (p.26). Apologists for its part will strongly warn against a man like. Kenneth Copeland. (Jmfr. My booklet "Focus on religious movement"!)

In the magazine "the good news", organ of the Free Evangelical Assemblies, run sales ads for cassettes and videos of Ulf Ekman, Enevald Fleet and Åge Åleskjær (see November 2000, p.21). Will think they're doing God's people a favor by this?

10.-12 November, the church Noahs Ark (at Stovner Oslo) v / pastor Roar Eriksen a Meeting weekend with one of the pastors of Toronto, Gordon Grieve. Faced ad stated that "meetings organized in cooperation with Hedmarktoppen." Bible Teacher Øivind Gaarder Andersen was an interpreter and a participant in the meetings. In a flyer was talked positively about "the Spirit fire that fell in Toronto." We then get confirmed that both this church and Hedmarktoppen Folkehøyskole watching TB as something positive and godly. This gives cause for concern, not least for parents who are considering sending their children to Hedmarktoppen!

At its meeting on Sunday evening said Gordon Grieve that everyone would receive the 100 twice what they gave in The collection. If not, he was a false prophet!

He also prophesied that the church Noah's Ark would get 1,000 members from 60 different nations! He also mentioned gold dust in your hair, holy laughter and twitching. Under intercession action eventually in the meeting fell more on the floor.

Toronto is thus not a phenomenon we finish. My booklet "Holy laughter - how holy is he?" recommended to those of apologists readers who have not yet read it. Perhaps some will also consider whether they should buy a portion of copies for distribution?

There has been much talk about the Apostles in the past. It primarily concerns me in this regard, the question is whether the persons are who gives himself / are chosen for such titles.

Personally I consider this phenomenon more as a threat than as a blessing since many of these people nor is such I would warn against than those I'd like to encourage God's people to follow!
(End of quote).

Final Comment:
In many ways, we are facing a movement that is corrupt, lascivious and downright satanic as God's word speaks. Here's really all law, worse than in the world. Therefore, all wrong, unhealthy and unbiblical. Here a simply that it even fits and everything is blessed and recognized in Jesus' name. But this is a false gospel, and have nothing to do with the true gospel to do. Kenneth Copeland living with his third wife just like Jan Hanvold!

And you think of Joyce Meyer, so think of Kenneth Copeland. Do you believe Kenneth Hagin Jr. so do you also to all this heresy. You get everything in the same "surprise bag" or "package"!