Nr. 648: Humanist Erasmus of Rotterdam Holland who managed to seduce a whole Christianity with its teachings for permission to re-marry and belief in a Triad God!

Humanist Erasmus of Rotterdam Holland who managed to seduce a whole Christianity with its teachings for permission to re-marry and belief in a Triad God!

Erasmus or his full name Desiderius Erasmus Roterodamus was probably never born again, but he managed to seduce a whole Christianity, especially Protestantism in translating the Bible wrong and put things in God's word that is not there. Neither the Trinity or remarriage among Christians is the biblical basis of the New Testament. He was also a humanist (a very famous), where one puts the human before God. As Christians we are first and foremost Christians, then we may humanists where we accept that human also belong. But to turn this upside down, it is to put God aside 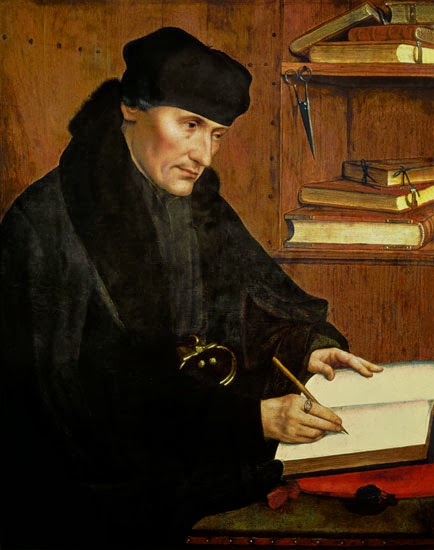 How he affected the Trinity

Theologians have pointed out several places in the NT to support in their view that God is three, three people. Father, Son and Holy Spirit-who are together in a god. This dogma is not particularly emphasized in the Bible except in some later texts other than in the first Epistle of John chapter 5 verses 7-8

Through the Latin Middle Ages believed that the text said: There are three that bear witness in heaven. The Father, the word and the Holy Spirit. Aha here it is, the dogma of the Trinity. But this is found only in the Latin manuscripts. Absolutely not in the Greek manuscripts of the NT.

Since the New Testament of the Greek manuscripts were published in 1516, a scribe named Erasmus did not include these verses to the great hubbub of his theological opponents who maintained that he was viciously removed Trinity from the Bible, Erasmus replied that he could not find this section in any of the Greek manuscripts he knew. And here goes the story. He challenged his opponents to produce a Greek manuscript of the Trinity. If they did it, he would include it in the next edition of the NT. In response produced his opponents a manuscript or at least they got a produced. Some copied John's first letter of the Greek and added these verses, and presented them to Erasmus. As the honorable man he was, he included these verses in the next edition.

This is why an older generation of readers of the English Bible was assumed that the Bible taught the dogma of the Trinity, even though this is not found in any Greek manuscript for more than a thousand years.

So what are the most reliable? The Greek manuscripts or the much later Latin?

Let now be abundantly clear, I stick to the original Greek manuscript. Then one must reject both the Trinity and Jesus only doctrine and belief in only one God, the Father, and he has only begotten, Jesus Christ!

How he affected their view of remarriage among Christians

The theory of the "innocent party" their right to remarry is less than 500 years old.

The idea that Matthew chapter 5 and 19 passages or "clauses" that provide the "innocent party" right to remarry, did not show up until this year 1519, when Erasmus, a great humanist, presented his interpretation of I Corinthians 7 Erasmus' interpretation of Scripture introduced human reason in the interpretation, rather than let the text interpret the text. His interpretation of Scripture was marked by humanistic overtones, in which he emphasized the people's happiness ahead of obedience to God's word. Erasmus was neither traditionalist or reformer, but wanted the utmost to be perceived as a godly man. He managed, however, to take payment from sin and found rather simpler solutions that covered the people. He served as the Gnostics focused on excessive spiritual experience.

Spirit lifted according to Erasmus the moral code of laws which had been the cornerstone of Jewish thought.

The last 50 years have left these heresies gained a foothold in the churches. There is one paradox that the Church has increasingly focused on spiritual gifts, healings and services that take our breath away, yet increasing number of divorces in the same churches. Frenzied manifestations of spirit is an intoxication leading to more liberal Christian understanding, rather than being more true to the word.

Biblical infallibility was undermined and Erasmus attacks scriptural accuracy. He linked the Christian ministry with God's holiness of life. Erasmus taught that love should precede any marriage and emphasized that it was not "loving" made by the church to insist that unhappy people would continue to live together. He believed that the church should set them free, who lived in the so-called bad marriage.

Reformers adopted Erasmus' views on divorce and remarriage, but this idea was not taught in nearly 1,500 years before Erasmus, from Christ's time and the early Christians. Although this theory is less than 500 years old, many Christians looking for a "loophole" or an excuse, that makes it okay for them to remarry. Therefore, Erasmus interpretation of first Corinthians gladly accepted by Christians who are looking for opportunities to follow their carnal desire to love another person after one's marriage has been "destroyed" or to state that you live in an unhappy marriage.

In 1532, King Henry VIII exactly this. He wanted to divorce his wife Catherine, to marry Ann Boleyn. He did Erasmus' interpretation of 1 Kor.7 popular and eventually broke with the Catholic Church because he wanted to marry again

Erasmus was a very religious person. One time he was Augustinian (Luther), but soon found that it was not right for him. Through mystique, he nevertheless sense of religious fervor and inner piety. Church maturity could be combated through personal improvement and ethical conduct. Something he practiced the opposite by permitted remarriage. But pious and well it should sound like, where a contradict themselves with fair and virtuous words.

Erasmus believed outward forms of religion, such as indulgences, saint worship and relics were completely erroneous, and he spent a lot of time ridiculing the sort. He criticized contemporary theological discussions to be concerned with trivialities and abstract relationships. Erasmus was a spokesman for a undogmatic piety. It was Jesus' practical life which interested him. The tradition had covered the core of Christianity.

Therefore, should the Bible be made available to the common people. Although he made a notable effort to get to it. He translated the New Testament from Greek into Latin, and the idea was that it should form the basis for further translation into languages ​​people. In addition to the translation he published comments, which made him a pioneer in critical biblical science.

Note that it was Jesus' life as "meant" something. At the same time he was socialite and enjoyed the social layer. Learning was nothing but change and adapt the most part, he could. This man is Protestant Christianity characterized more by than any other, no wonder that it is becoming a Babylon that is different than the Catholic church. Yet a Babylon where everything is allowed. The word of God refers to as the Nicolaitans and Balaam's teaching and preaching.

Erasmus reminds me of the modern man who would put their own desires always higher than God, Scripture also warns against (2 Tim. 3 5).