No. 1444: Pastor Jan Aage Torp rails on his own blog as a spoiled little boy that he does not get the right of defense, but then write what you think on your own blog and accept that injustice is great!

No. 1444:
Pastor Jan Aage Torp rails on his own blog as a spoiled little boy that he does not get the right of defense, but then write what you think on your own blog and accept that injustice is great!

The newspaper Vårt Land has probably counted 20 to 30 articles about me over the years?
At the same time, I've been thrown out of Verdidebat for quoting David Wilkerson.
I only once wrote a reply, and then I got a maximum of 10 lines which was all they could give me. I thanked yes, and wrote.

But I have my own blog, and accept that the newspaper Vårt Land shines as they please.

This is what Pastor Jan Aage Torp writes on his own blog.

Pastor Jan Aage Torp has been in the public space for 40 years - it seems to me that he is a beginner with that whining. Unfortunately, what he experiences is "normal" to mean something that is beyond "approved."
The newspaper Vårt Land then writes against Torp, so they will not let him go that way. This is a fact, even Christian newspapers are unfortunately at least as dishonest as worldly newspapers.
That Torp does not know this and whining like that just shows what low goal he is holding.
Then forget the newspaper Vårt Land, you have your own blog and websites etc.
As well as the newspaper Norway today that he boasts so, he probably gets an article there and a "response" to the newspaper VL?
No, for a childish spoiled man like Torp. This is something we all experience that is not "inside" in the heat fully!

Just in this case, I agree with Pastor Jan Aage Torp.

Writing than anything against a person, then of course one should be allowed to write and speak in the newspaper that writes about one. This should have been "normal".
But anyone who has been in the public sphere knows that it is not, not for any of us.
Especially when you speak to a person, you also have something against the person. When allowing this person to come up with a "counter attack" few people really allow it.

Jan Aage Torp should rather thank God, and see to it that he cannot resist the criticism and write against the newspaper Our Land as an affirmation of his Apostle calling and ministry. The scriptures say:

1 Cor. 4. Everything has become saturated; You have all become rich; without us you have become masters! Yes, suppose you had become masters so that we could rule with you! 9 To me, it seems that God has shown us apostles as the poorest, who condemned death; for a spectacle we have become for the world, both for angels and for humans. 10 We are fools for Christ's sake, but you are wise in Christ; we are frail, but you are strong; You are honored, but we are honorless. 11 At this very moment we are both hungry and thirsty and naked and mistreated and homeless and miserable, 12 working with our own hands; we are spoiled - and we bless; we are persecuted - and we endure it; 13 We are mocked - and we admonish; we have become like degenerates in the world, a disgust for everyone, until now.

Notice the words like this: “To me it seems that God has shown us apostles as the poorest, who are condemned to death; for a spectacle we have become for the world, both for angels and for humans. We are fools for Christ's sake, we are frail, working with our own hands; we are spoiled - and we bless; we are persecuted - and we endure it; We are mocked - and we admonish; we have become like degenerates in the world, a disgust for everyone, until now. "

Since Jan Aage Torp says of himself that he is an apostle, it seems strange that he complains that he is not given the opportunity and the right. This is something we all experience - unfair treatment

Jan Aage Torp wrote an article a while back pointing out his strong position. In other words, a little fly in from Hell and the "great" apostle screams. Let's read here what Jan Aage Torp writes in the article, a short excerpt.

Why Torp's "strong position and methods"?

Posted on 06/07/2018 by Jan-Aage Torp
Screenshot from the article with some subsequent text. 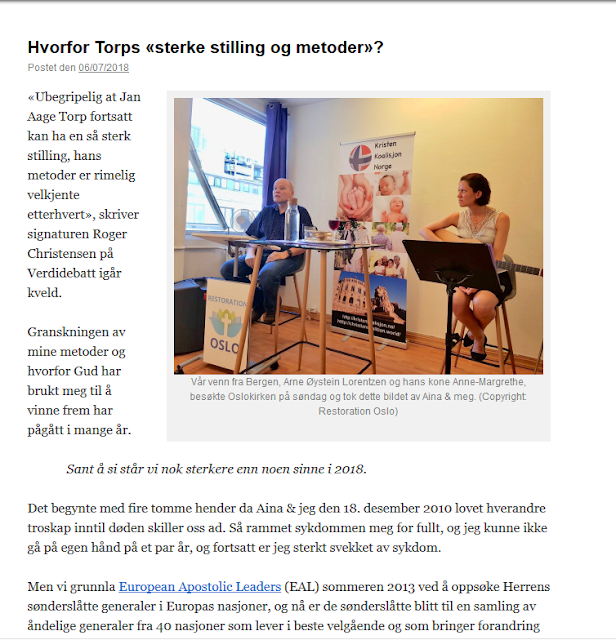 The resistance increases proportionally with the anointing
I never experienced resistance and mockery until 1991. The pastor years from 1983 to 1990 were demanding, but mostly because of the difficulty of finding our own position as pastor and family. I was always "young and promising." We were applauded by most.

But resistance and mockery have followed my ministry for the past 27 years. At times the resistance and betrayal have been so massive that I have tried to displace the memories. Painful experience.

A Mahatma Ghandi quote has helped me over the last seven to eight years:

Ghandi's wise words have given me perspective, and it is fulfilling today for our eyes!

I was shocked in 1992 when the newspaper Our Land, which had always shown me respect, suddenly began to disrespect me. Respect for the politically correct Torp, but as soon as I spoke against Rome, Our Country pulled the "controversial card".

I remember how a (gay) reporter had a radio broadcast on NRK Weekly with me in 1997 where he played a sound recording in which a group of gays shouted tactfully and scornfully into the microphone about "Torps small congregation". The size of the congregation was made a point, not the effect of the message itself.

The same thing happened in 2006-2007 when a celebrity in a Christian-conservative context in Norway began to tell that he had "intelligence" which indicated that the Oslo Church "is gathering only 15-20 at your meetings". His conclusion, therefore, was that I no longer had to be given so much space in Christian media, nor in national media. Again, it was the size of the congregation, not the message.

In 2011, misleading people in the media hammered me about being "dangerous," knowing that I had quit my public business a year and a half ago.

And in 2018, Fragell & Co is experiencing "schizophrenic rage" as they try to figure out if I should be mocked as "small and insignificant", or mocked as "powerful and dangerous". I laugh.

The truth is probably just that the Lord anointed Him He will, and He stands behind His living Word. The prophet Jeremiah's message in the dungeon is still alive today. The size of the assembly meant nothing at that time, nor today.

The Oslo Church has grown a great deal in the last eight to nine months after we established ourselves in the heart of Oslo, and KKN's membership is growing significantly. But it's not the size that determines.

The resistance increases proportionally with the anointing.

It is wise to follow the Lord's exhortation through the Psalmist (Psalm 105: 15):

"Do not touch those whom I have anointed, do not hurt my prophets!"
(Quote end.)

This is what Torp says himself, and that he has had constant resistance for the last almost thirty years. I would say welcome to that. The similarity between me and Torp is that we face resistance, but how we cope with it is a wide difference!

Torp fights, fights, scares and reports those he is clinging to. I resign and leave it behind me. Ignores, forgets, and seeks to do God's will and find new ways and ways to progress in life and service. This is contrary to what Torp does. Think actually here Jan Aage Torp has a lot to learn from me!