No. 1446: It looks bad, but there are still two possibilities!

No. 1446:
It looks bad, but there are still two possibilities!

Exodus 14. 21 And Moses stretched forth his hand over the sea, and the LORD drove the sea away with a strong east wind that blew all night, and made the sea a dry land, and the waters parted. 22 And the children of Israel went through the midst of the sea upon the dry; and the waters stood as a wall upon their right and on their left. 23 And the Egyptians followed and followed them into the midst of the sea, all Pharaoh's horses, his chariots, and his horsemen. '29 But the children of Israel walked in the dry midst of the sea, and the waters stood like a wall on their right and on their left. . 30 Thus the Lord saved Israel that day from the hand of the Egyptians, and Israel saw the Egyptians lying dead on the sea shore. 31 And when Israel saw the great work the LORD had done with the Egyptians, the people feared the LORD; and they believed in the Lord and in his servant Moses.
15. 3 The Lord is a man of war; the Lord is his name. 4 Pharaoh's chariots and his army he cast into the sea, and his chosen chariots were drowned in the Red Sea. 5 The abysses hid them, they sank like stones in deep water.
Picture of the incident, how it may have looked. God is powerful in allowing the same thing to happen to us, and in our cause. The Red Sea divided and became a salvation for the children of Israel, but for judgment, death and destruction for the Egyptians! 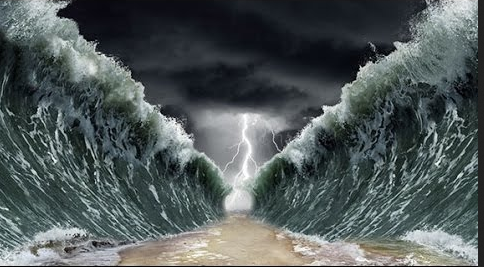 1.) That the County Assembly is reviewing everything. Have filed a complaint with them, again.

2.) PBE realizes that they have been unreasonable to us, and turns!

Pray that God has a way out of it anyway, in Jesus name!

Psalm 68. 20 Praise be to the Lord day after day! If you put a burden on us, God is our savior. Sela. 21 God is our God to salvation, and with the Lord, the God of Israel, there are rises from death. 22 Yes, God crushes the head of his enemies, the hairy ass of him walking in his guilt. 23 The Lord says, I will bring back from Bashan, I will bring back from the depths of the sea, 24 so that your feet may be plunged into blood, the tongue of your dogs will be part of the enemies. 25 They see your triumphs, God, my God, my king's, triumphs into the sanctuary.

This is sent to the County Governor.

Should be brief here, but that PBE contends with what is pretty obvious that the time is right to give us the exemption we need and approve the wall, staircase and storage room.

Now it is rather sought to say that our wall is out of the way when, for example. The neighbor's wall just above on the other side really lies out on the road. Thus, our wall is illegal etc.
It is 20 cm from the road, while spring is 1 meter. Then we mean paved road, which is the real thing we are talking about.

The neighbor's wall in Stormyrveien has a wall that prevents traffic as we have to park the car that is parked out there in the roadway unnatural as the wall is so far in front of the paved road that it is completely unreasonable and incomprehensible that the wall that is a real problem must stand.
While ours is not a hindrance, on the contrary, it is a clear advantage with our wall as the roadway has become 20 cm wider after we set up our wall, when we pulled in the wall in relation to how the terrain was before. And as our neighbor today has it next to us with mold, soap and lawn down the roadway that we also had and as PBE wants us to demolish our wall and get it that way again. This is a clear deterioration in absolutely every way.

With our wall, it is a clear advantage and in favor of everyone that we then have to demolish that wall is just for one thing. That PBE wants to show his POWER, NOT FOR ANYTHING!

When it comes to stairs, it is also for the benefit and favor of everyone. When the ambulance came here about 2 - 3 years ago when our daughter needed emergency help, they did not find it in the Krokstien and got the ambulance to drive us. What did they do then? They drove down Stormyrveien, jumped up from there, and used the stairs that PBE now wants to be demolished.
Only reason for tearing up the stairs is that PBE SHOWS HIS POWER AND ARROGANCE, NOT FOR ANY OTHER REASON!

Our booth as a PBE wants us to tear down, also experienced as both unreasonable, incomprehensible and without substance in its repeated decisions and orders. Isn't it a shame or a hindrance to someone?
It is not seen from the road or other properties other than ours as it is so sheltered and with such a them the Egyptians drowned in the Red Sea Pet expresses that the excesses in terms of utilization are insignificant and minimal.
Only reason for it to be demolished, it must be that the Planning and Building Agency is shown its power, NOT for any other reason.

What is this matter really about? Now after 5 - 6 years of struggle?

It's basically about the little man fighting a heroic fight against a brutal force majeure.
Here, PBE should long ago have realized its mistakes, meaningless and unjust decisions and orders above us.
The only reason we can see again here is that PBE WANTS THE LAST WORD, AND SHOWS THAT AS A GOVERNMENT HAS GREATER POWER THAN US AS "REGULAR" CITIZENS!

We oppose any order and anything else that does not give us a quick endorsement of our wall, staircase and storage room which is perfect and just for the blessing and favor of everyone!

Will also say in the end, that the wall that has now become PBE's hottest object to get removed, is then built in consultation with PBE. We called down, told that since there was a wall opposite the road from before. Then we didn't have to search, it was just building a wall on an old wall. We did, and in retrospect it also turns out that the wall that is obstructing the traffic and which is such that demolition is the only option. 20 cm from the road is 80 cm too small. While spring which is 1 meter from the roadway, it should be demolished and PBE uses the strongest words they can by saying it is in the roadway etc. (1 meter from paved road.)

Here sparrows shoot with guns as they do with us.

While the neighbor's wall, which is both illegal and obstructing the traffic, one looks through his fingers and leaves as it does not belong to small-scale housing etc. are the reasons and answers we get from PBE when we have pointed this out.
But our property is then actually built before small-scale housing, as our house has been set up in recent times, but it used to be an old house.
Than should then be thought the same, but to us, PBE uses the heaviest shots they can, even though our wall is really perfect in every way.
While the neighbor's obvious is both illegal and far from ideal.
Here is one so gentle, overlooks everything and even defends this!
No, PBE here in Oslo is moving in a landscape we do not understand.
Will eventually use a word in from the Bible that was written 2800 years ago that fits perfectly into the PBE handling of us and our cases.

Isaiah 5. 20 Woe to those who call evil good
and the good evil,
those who turn darkness into light and light into darkness,
bitter to sweet and sweet to bitter!
Lagt inn av Jan Kåre Christensen kl. 13:25