No. 1445: When Jesus was surrendered to the authorities - the scriptures say it was to lawless men, and it was Judas Iscariot who betrayed him, in our case there are clear similarities when Pastor Jan Aage Torp operates as a traitor and manipulator, and the police and courts as lawless men and women!

No. 1445:
When Jesus was surrendered to the authorities - the scriptures say it was to lawless men, and it was Judas Iscariot who betrayed him, in our case there are clear similarities when Pastor Jan Aage Torp operates as a traitor and manipulator, and the police and courts as lawless men and women!


Picture of Judas betraying Jesus with a kiss.
This is how Pastor Jan Aage Torp has also broken God's word by divorce and remarry.
As well as reporting brothers that he did with me, the scriptures warn against doing so as this will be addressed in the congregation.
Here one should not let go of the world and the authority, in matters of marriage.
The question of divorce and remarriage belongs to the congregation, not the world and worldly affections. 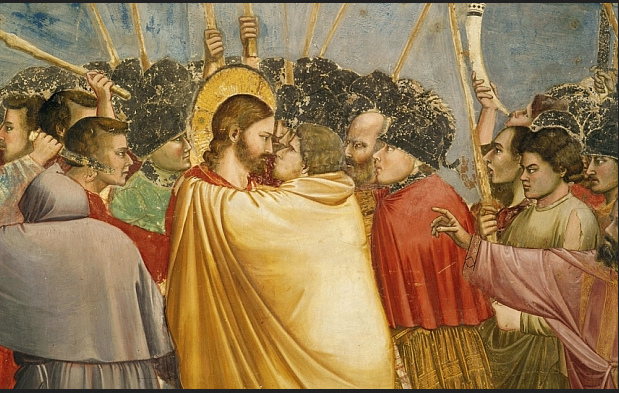 It says about Jesus the following:

"Israelite men, hear these words! Jesus of Nazareth was a man appointed to you by God by mighty works, wonders and signs which God did in him in the midst of you, as you yourselves know. He was betrayed by God's appointed counsel and providence, and you killed him by nailing him to the cross at the hands of lawless men. " (Acts 2: 22-23.)

Notice that these were government officials - but scripture calls them lawless. Why? Because they did not follow the law that applied.
It was e.g. clear things in both Jewish and Roman law that were broken in relation to Jesus' judgment, death and crucifixion.

According to the law, for example. no one will be questioned at night. No one should have a lawyer when it comes to capital punishment. Should anyone be sentenced to death, clear evidence should be provided and after the evidence was presented. Should the judges go home and relax. Second, they should return after 1 week, and then be found guilty or acquitted. So I could have, and the Jews could not judge anyone to crucify. The only thing that went right for Jesus was after he died. Then his legs were spared and this was actually the only thing that happened to Jesus as laws and rules were followed.

Retrieved from the web where one describes this with Jesus being surrendered and condemned by people who say the scriptures were lawless even though there were government officials.

Asked by the Sanhedrin and taken to Pilate!

The night is soon over when Peter for the third time refuses to know Jesus. The members of the Sanhedrin have ended what has been a parody of a lawsuit, and they have gone separately. When Friday morning comes, they will come together again, probably to try to give the night's illegal trial a certain legal touch. Jesus is brought before them.

They continue: "So are you the Son of God?" Jesus replies, "You say yourself that I am." They think this is good enough reason to accuse Jesus of blasphemy and have him killed. "What about more testimony?" They ask. (Luke 22:70, 71; Mark 14:64) They therefore bind Jesus and lead him to the Roman governor Pontius Pilate.

Judas Iscariot may see Jesus being led to Pilate. When Judas realizes that Jesus has been condemned, he receives guilt and a bad conscience. But instead of turning to God and showing genuine remorse, he goes to give back the 30 silver coins. Judas says to the chief priests, "I sinned when I betrayed an innocent man." But they answer heartlessly: "What has to do with us? That is your problem! ”- Matthew 27: 4.

Judas throws the 30 silver coins into the temple and then makes it even worse by trying to commit suicide. As Judas tries to hang himself, the branch in which he has tied the rope is probably broken. He falls on the cliffs below and his body cracks. - Acts 1:17, 18.

It is still early in the morning when Jesus is taken to the residence of Pontius Pilate. But the Jews who have taken him there refuse to go in. They believe that such contact with non-Jews will make them unclean. If they become unclean, they will not be able to eat the meal on the 15th of Nisan, the first day of the Feast of Unleavened Bread, which is seen as part of Passover.

Pilate comes out and asks them, "What are you accusing this man of?" They answer, "If this man were not a criminal, we would not have handed him over to you." It may be that Pilate feels they are trying to put pressure on him, so he says, "Take him and judge him according to your own law." The Jews reveal their murderous plans when they answer, "We are not allowed to kill anyone." - John 18: 29-31.

If the religious leaders kill Jesus during the Easter celebrations, it is likely to cause revolt among the people. But if they can get the Romans to execute Jesus for political reasons, something the Romans have authority to do, the people will certainly not hold them accountable.

They do not tell Pilate that they have r condemned Jesus for blasphemy. Now they dictate other charges: "This man deceives our nation, forbids people to pay taxes to the emperor, and says that he himself is Christ, a king." - Luke 23: 2.

As a representative of Rome, Pilate has cause for concern when he hears the claims that Jesus claims to be king. So Pilate goes into the dwelling again, calls Jesus, and asks, "Are you the King of the Jews?" In other words, he asks if Jesus has broken the laws of the land by claiming that he is a king in opposition to the emperor. Jesus, who may want to find out how much Pilate has already heard about him, says: “Do you ask this of yourself, or have others told you about me?” - John 18:33, 34.

Pilate states that he does not know so much about Jesus: "Am I not a Jew?" Still, he is interested in knowing more, so he adds: "Your own nation and the high priests have surrendered to me. What have you done? ”- John 18:35.

Jesus does not try to avoid the question of being king. What he answers, no doubt, surprises the governor.
(quote at end).

I was also "handed over" by a "Judas". And was exposed to the same as Jesus, but of course in a gentler and more sophisticated way.

So what happened to me?

Yes, I preached the word of God against divorce and remarriage.
This disliked Pastor Jan Aage Torp and went to Manglerud police with a fictitious review where he made false charges.
What he accused me of were just a few harmless statements.
When the case was further investigated, I saw "counter-notification". the trio Torodd Fuglesteg, Arnt Arnesen (Ansgar Braut) and Jan Aage Torp who had written much more and with much harder shooting at me. This was completely overlooked by the police even though there were both threats and the desire for my death + 1000 other things.
When the trial came, it fell completely into "fish" for the prosecution as there was nothing criminal in my writings. What did they do then?
Turned out a verdict that now it was the "crowd-writing" that was punishable, talk of murder!

When the case came up for the Borgarting Court of Appeal, I clearly saw from the judgment in Oslo Tingrett was based on the odometer claims.
When I said this, the judge pretends to write that no one had raised any objections.
Fortunately, I recorded this on tape and it is out on Youtube.
Look here:

Scripture says:
The Preacher 1. 9 What has been is what is to be, and what has happened is what is to happen, and there is nothing new under the sun.

What Jesus experienced and what I experienced is really much the same.
Of course, many things are different as well, since I live in the best of ways and Jesus had to make good on his life after being exposed to Satan's cleansing games, etc.
But that scripture calls government figures as lawless, those who have to deal with the law. As well as meeting with Judas Iscariot and Pastor Jan Aage Torp who are both traitors.
It is also to learn that Satan always behaves in the same way all the time.
It is to get us into "imbalance" through lies, intrigues and distortions of truth!