No. 1443: The "positive" of the submission and the verdict against me is that I speak and write as unobtrusively as before, but I am not satisfied until Jan Aage Torp gets his fair punishment for being convicted of false charges!

No. 1443:
The "positive" of the submission and the verdict against me is that I speak and write as unobtrusively as before, but I am not satisfied until Jan Aage Torp gets his fair punishment for being convicted of false charges!

Picture of a prison cell. That was Jan Aage Torp's unspoken goal when he had gone to the police with his fictitious review of me and that he wanted money. He ran a Serber for several Millions, so money is Torp.
The fact that the police were fooled by Torp is just tragic, as is the Oslo District Court and the courts here in Norway. Convinced that in my home country Denmark this could never have happened, where such people should live in prison. 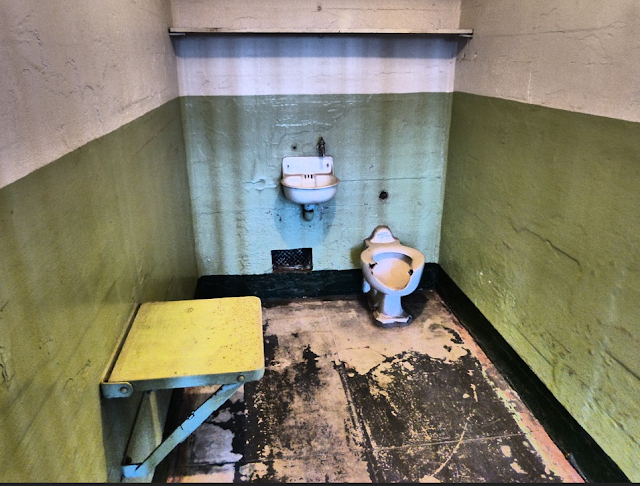 The reality of the matter is that he has achieved little and nothing.

I am writing as before, and may have more articles now out on the blog Justismord about Pastor Torp than ever ?!

Narro Apostle Jan Aage Torp occasionally waves the sentence to threaten "Levi Fragell and others to silence", while the reality is that I can still write what I want without consequences.
Actually all Torp has achieved is only to make its own mistakes known.
As long as he does nothing about my writing, he has in reality achieved zero and nothing!

But I am not satisfied with this case until the fool apostle and manipulator Jan Aage Torp gets as deserved. He wanted me 2 years in prison and probably Million amount from me when he popped up his fictitious review of me. And Manglerud police chamber was rounded up by him and later the Oslo District Court when he presented undocumented claims in the Oslo District Court that I rejected in Borgarting Lagmannsrett as a lie and completely, completely beyond the facts.
This overlooked lie judge Øystein Hermansen and wrote these lies in the judgment that this was not contradicted. But luckily, I recorded it on tape and it is out on YouTube where Øystein Hermansen gets completely undressed.

That Pastor Torp is being prosecuted and convicted of false charges is very important for freedom of belief and expression here in Norway as Torp has managed to trick both the courts and the Oslo police with his fictitious review.
There was only one thing Torp hated me for, it was my "religious" and Christian stance when it came to marriage.
They should now realize that Torp was able to fool the Oslo police and the courts, and aim and hopefully get Torp convicted of fictitious review.
Of course, Torp was not provoked or harassed for anything else I had written.
On the contrary, Torp loves to be mentioned whether it is positive or negative, only he gets a mention!

The goal is to get a new trial against Jan Aage Torp where he is charged and convicted of false charges. He gets a prison sentence and is totally and completely revealed. As well as my family and I get a great raise in every way and plan.

Word. 15. 9 The Lord abhors the way of the unrighteous, but loves him who pursues righteousness.

Justice both here on earth and in the world to come, that God works for. Therefore, this is in accordance with God's will that since Jan Aage Torp made false charges against me. When he seduced both the police and the courts that I had "harassed" him, but it was my proclamation of remarriage that triggered and provoked Torp.

This is both hypocritical, criminal and simple.

This both hope and I think Torp will be punished for.
When the script says that your sin will find or catch you, sooner or later.

Here is a promise to Jan Aage Torp, this will happen sooner or later.
Therefore, I know that God will bring everything to victory, I have known from day one!

Deuteronomy 32. 35. I hear vengeance and retribution at the time when their feet tremble; for their day of adversity is at hand;

Heb. 10. 30 For we know him that said, I have vengeance, I will repay, and again, The LORD shall judge his people.

Yes, it is bad for a whore like "Pastor" Jan Aage Torp to fall into the hands of the living God, believing in himself that one does not live against God's word when the Word clearly states that he is a whore!
Lagt inn av Jan Kåre Christensen kl. 11:19