No. 1449: Interview with Torben Søndergaard who experiences much of the same thing as us, where one has to fight the battles alone as the vast majority of believers do not understand what the hidden persecution of Christianity is in Europe today!

No. 1449:
Interview with Torben Søndergaard who experiences much of the same thing as us, where one has to fight the battles alone as the vast majority of believers do not understand what the hidden persecution of Christianity is in Europe today! 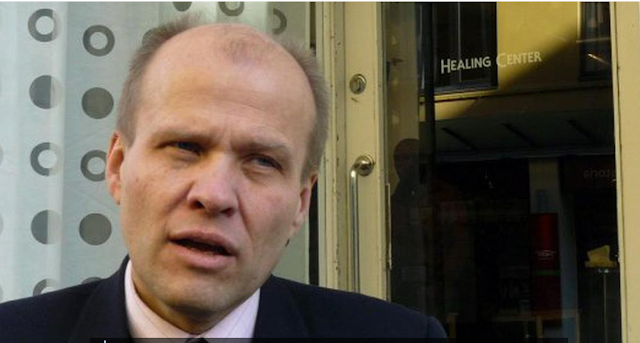 - Until last year I was proud of having a Danish passport - of being from a country with freedom. But I have learned that that freedom applies only if you do not obey God's Word completely, says Torben Søndergaard.
Fears prison and child welfare conflict
He is the founder and front figure for the revival movement The Last Reformation - "the last Reformation", which has followers across much of the world, including Norway. He has gathered hundreds of participants at weekend conferences in Norway, most recently in Kristiansand a year ago.
TLR started in 2011 based on the belief that it is meant to experience today what is read in the Acts of the Apostles, by returning to the same type of discipleship that the first Christians lived. The movement's relationally based and loosely composed networks spread to all parts of the world in no time. In Denmark, they recently had the main base of a former sports school with up to 200 beds for Bible school students and the possibility of major meetings with a few thousand present.
But in January of this year everything was turned on its head. The base in Denmark has been closed down and Søndergaard has taken the family to the United States. If he returns home, he fears both prison sentences and conflict with the child welfare service.

Norway today talks to him via the internet while traveling in Charlottesville, Virginia. There he is to be interviewed on radio and television. American Christian media is interested in both his movement and his alarm of Christian persecution in Europe. He has so far refused to talk to Scandinavian journalists after moving, but he has chosen to make an exception.
- Before January this year, I never would have thought that it could happen that I would take my wife and our children to another country and apply for asylum, he says.
The story begins January 2nd. Then, Danish TV2 aired the first episode of a three-part documentary series called "God's Best Children." He had allowed a TV2 camera team to follow his service for a year and a half, after submitting that they wanted to create a program about how people get their lives changed in the face of his movement. "You have something else to offer than the national church, and we want to tell those stories," he recalls telling them.
In reality, they created a series about overtramping in far-reaching religious movements. They mentioned not only Søndergaard, but a bunch of Christian leaders and organizations where it has previously been uncovered, including financial fraud and child abuse. In the middle of this, Søndergaard is cut.
- When I saw the first episode, I thought, "I look guilty. I would have thought this was a guilty man if it was about someone else. "That's because of the way the series is cut," says the preacher, who is also a filmmaker himself.
- I really try to live a holy life and maintain a high standard in moral issues after seeing what has gone wrong in so many other services. It is difficult to present such a picture of himself, he says.
This week it became known that the TV channel has been fielded in the Press Board, the Danish variant of the Press's Professional Committee, for the way they produced Søndergaard. But in the meantime, the snowball rolled.

In the programs he is accused of asking the mentally ill to throw his medicine.
- I don't talk to people about medicine. But an "undercover" journalist who pretended to seek intercession asked me over and over again about drug use, and I explained that God is greater than medicine. That doesn't mean sick people should throw away their medicine, it would be stupid. But to continue on medicine after being healed is just as stupid. What I recommended to her was to go and talk to the doctor, tell how she whas been changed and ask him to take her off the medication. That part was toned down in the program.
The accusation that has caused the most resurrection is that children must have been traumatized by witnessing demon expulsions in TLR. As documentation, TV2 shows in a much-played trailer a clip of a little boy standing with his pants down and crying.
- They have cut this with intercession from other collections we have had and made it look like he is crying because of it. This boy was with his parents at a meeting where we had baptism. The boy is autistic. He saw the baptismal pool and took off his pants because he wanted to swim. When his parents denied him, he screamed in protest, says Søndergaard.
- I have been evangelizing on the streets for 20 years and casting out demons for ten years, and I have never received feedback from anyone who claims to have been traumatized by witnessing this.

He does not hide the fact that it was tough to see how friends and brothers turned his back, both in the TV series and in the debate afterwards.
- January 9 is the day I will never forget. Then I watched the trailer for the last episode of the series, and realized that people who had worked with us had come out and lied about us. Then everything got dark. I thought no one would ever trust me again, and no one would believe in what I stood for. "Now I'm done in Denmark," I thought.
During the following three weeks, he was on national television ten times and became a featured in the news media. The network of Danish Free Churches, the Free Church, took a distance and called his methods extreme. Psychologists and interest groups warned against him, and he was referred to on television as "dangerous". The business partner who had invested in the sports school as premises for TLR withdrew from the movement because he thought Søndergaard controlled too much.

The law was changed

After the media run, Søndergaard felt it necessary to leave the country for a period. On January 24, he ordered tickets to the United States, and on January 26, the family left. Soon they got the idea that it would not be so easy to return.
- I heard about two legislative changes that were underway, he says.
One was a new law on mental violence, which equates the penalties for physical and mental violence. It was adopted by the Parliament in March. In the enclosed political remarks to the legal text, it is stated that one of the actions which is assumed to be defined as psychological violence is to allow children or persons with disabilities to witness the eviction of demons. Søndergaard has no doubt that the law is aimed at him.
The second is a change in the child welfare system, in the direction of Norwegian practice, where the child welfare service can remove children from parents after emergency decisions without first going about the courts.
- Even before this, we felt that the child welfare service looked suspiciously at us. It began when we gave our daughters homeschooling instead of sending them to public school. Last fall, they wanted to look after our daughters because I had been on a boy's trip with men - and some teenagers - from our Bible school, where we had slaughtered and eaten a hen, which they thought was brutal.
Therefore, he became an asylum seeker
They decided to make life in the United States lasting, and eventually they saw no alternative but to seek asylum.
- But there are other ways to stay in the US than through the Asylum Institute ...

- We wanted the first two and a half months to get a work permit. Then we hoped things would calm down in Denmark. But when I saw what happened to the new laws, I realized that there was no going back.
Søndergaard warns against believing that he is the only one who risks persecution as a result of the Law of Mental Violence.
- In a completely secular society, where you do not believe in demons, God or healing, you have now made a law against demon expulsion after watching a television program. What is the next step? Can children be traumatized by being prayed for? Or to hear the gospel preached? This is the first step towards removing the freedom of belief. People may think that this only affects "extreme Christians" who do wrong things, but then you do not realize that this is something that affects every born-again believer who wants to do Jesus' deeds. I have not done the things other Christian leaders in the program have done, but I am still held guilty. Then everyone can be considered guilty. Our faith in the Danish system has collapsed. That's why we left the country.

Never cry so much

- On the one hand, this has been the most difficult half year we have ever had as a family. I've never cried so much and never experienced so many shocks. But on the other hand, I really see God's hand in all this. Jesus has promised us persecution, says Søndergaard.
- In many areas, God has called us to be pioneers, to lead the way. I believe that what we have experienced is meant to prepare the congregation for what is to come. I may be the first from Scandinavia to seek asylum in another country because of persecution of faith, but I certainly will not be the last.
Currently, the time in the United States is most likely to travel around and building relationships and getting to know their new country.
- I have not yet obtained a work permit, so we are not holding major conferences at this time, he says.
When it comes to order, they hope to be able to build a new headquarters.
"There's a center in North Carolina that we think God will give us, but we haven't got it yet," he reveals.
Ask Christians to be bold
- Why was it necessary to close down the entire organization in Denmark?
- Because I left. If I came back again, we could have run the school again. I had a great deal of teaching.

- TLR does not have much money. Our books and seminars are free, because we try to do things differently than usual. We rented the building and had the expense of having a school there, and when we finished abruptly, the building was left standing without students for months. We incurred close to a hundred thousand dollars in debt, but God has provided for us so we have been able to pay it all down. Now we owe nobody anything, but we have nothing either.
He talks about how a stranger contacted them when they arrived in the United States and had been accused by God of assaulting him with an apartment. This is how he feels that God has been involved.
- I hope that what has happened to me will not create fear in Scandinavia and Europe, but that people will instead gain boldness. When Paul was in prison, he asked the Christians to preach the gospel with even greater boldness, says Torben Søndergaard.
(quote at the end.)
Lagt inn av Jan Kåre Christensen kl. 11:07