No. 1442: Pastor Jan Aage Torp, like the fool and manipulator he is, has been able to trick both the police and the courts into "playing" offended, offended and as he has never written and done anything "wrong" himself!

No. 1442:
Pastor Jan Aage Torp, like the fool and manipulator he is, has been able to trick both the police and the courts into "playing" offended, offended and as he has never written and done anything "wrong" himself!

When I have recently read through again what I have written about Pastor and fool Apostle Jan Aage Torp. Then I am both amazed and delighted at how clear and clear I have been all along. I have basically had the same opinion and views all the way. What I said before, that I stand for and need not erase and change any of what I have written and spoken in the main and all!

Facsimile from narra apostle and manipulator Jan Aage Torp's blog, now he is "offended" by the newspaper Vårt Land, where he has actually put everything together himself WITH BL.A. DEMON RELEASE OF HIS OWN CHILDREN + THAT THEY HAVE MADE HIM, HIS OWN FATHER, FOR HAT!

Even Torp does not hate me and the Heavenly blog because I have written and spoken that he is a fool, impure and other. But one and only I have pointed out that he is remarried as a "believer". That he is thus unfit and disqualified as Pastor and preacher. In other words, the police and the courts have managed to seduce "Pastor Torp" to engage in freedom of belief and expression!
This is at the heart of the matter, and it is so sad that the police and the courts have not at all wished to realize that they have simply been rounded up by narra apostle Jan Aage Torp. 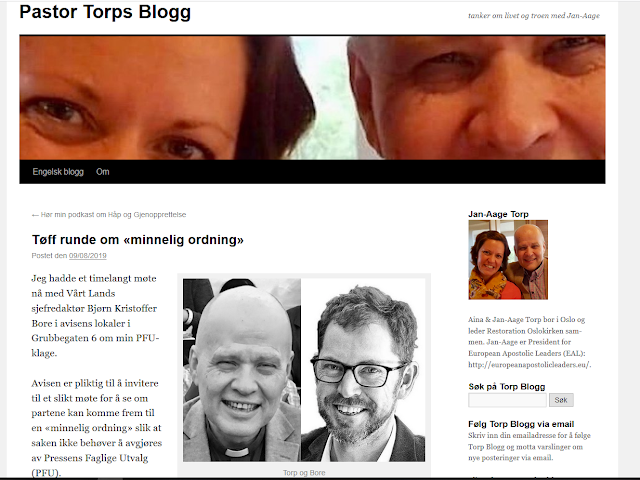 Offenses are often associated with being reproached, treated patronizing, unfair and disrespectful.
Social democracy teaches us to take care of each other, and that's good. But we do not learn to take care of ourselves. It is not good. When Socrates greeted an acquaintance who merely overlooked him, he had the following comment: "It is not against me that I am more polite than him." Socrates was not offended. (The other committed self-harm; he made himself an abusive human being).
Can you take care of yourself when you meet disrespectful people?
Whoever has self-respect cannot be offended. He who lacks self-respect and looks down on himself becomes easily approachable. He claims to have been offended, "hurt" and "feels" he has been bullied. At the same time, colleagues are labeled as bullies and abusers. I do not deny that bullying can take place. But too often the mob card is played as part of a ruling technique. One is offended until well-being. Proximity is a treatable and preventable neurosis: children need praise, and parents who are proud of them.
My feelings are just that - mine. They are created by my brain. I (not you!) Annoy me and get angry. I (not you!) Am looking forward and happy. It's not you who offends me either; I'm offended. My reaction to an insult is usually far more harmful to me than the insult itself! (Feel free to read the sentence again).
Thus, it is not the sender's infinite behavior that creates the offense. It is the recipient's inability to take care of himself that is the problem. Whoever is offended by the words of others (shells) has failed himself.
So what can we do to not be offended?
First, it is important to recognize the obvious, that my feelings are my responsibility. I can't blame others if I get angry or upset or provoked. Second, words are not dangerous (The word "tiger" cannot attack us) Words cannot hurt - only "hurt"! There is a subtle difference between wounds and "wounds" (Look up the alien dictionary on "metaphor")
Everyone is different. This gossip contains a profound truth; No two of us react exactly the same to the same experience. Some are offended, others not. The one who is not offended has understood something essential, namely that the words of others have only the power that the recipient allows. This insight is aptly formulated in the following quote:
"Sticks and stones may break my bones, but words will never hurt me".
There are no abusive words, only people who can be offended. Whoever is offended by the words of others (shells) has failed himself.
If I let others decide what to feel, I will give up their whims and whims, and lose power over myself. Better to "take a Socrates"! Everyone can learn this. Whoever decides on my feelings determines my life.
It should preferably be myself.
(quote at the end.)

When I read about the narcissist in professional literature, it is as if I read about the narcissist Jan Aage Torp, it is as if they are identical.
That the police and the courts did not have the ability or the will to reveal this is alarming and frightening. Those who are to be the defender of the good, the scripture says the following about authority.

Here I did the good, preached the word of God. The one who got excited and harassed more than anyone was me and my family.
What did the police and the courts do? They left everything as a fool apostle and manipulator Jan Aage Torp applies as "true".

In other words, the whole thing against me was nothing but manipulation and lies.
The truth - the real truth - was that the REPORT itself was FACTORY. THAT'S THE "BIGGEST" CRIME IN THIS CASE THORP GIVEN IN A NOTIFICATION THAT WAS DISTRIBUTING THE WHOLE CASE AWAY FROM FREEDOM OF FREEDOM AND SPEECH. TO APPLY ANYTHING ELSE.

Now we can also say that my lawyer had no good grip on the matter in the sense that he was only concerned with law enforcement.
This was really okay, but it made things a lot easier for it to become a murder case.
My lawyer should also have blamed Torps for massive lies and manipulation that only I and I alone clearly stated.
Unfortunately, Brynjar Meling also got rid of Torp, so Torp also praised him. Well, this case was really only one man who ruled, it was the fool apostle and the fooling Jan Aage Torp.
Just hope, believe and pray that my appeal is brought forward. And the police will look into the case, and Torp is eventually convicted of false charges against me!

Look here for what Norwegian law says about false charges: