No. 859: A summary of article written with relevance in Mohammedans faith, life and religion!

No. 859:
A summary of article written with relevance in Mohammedans faith, life and religion!

An artist impression of the 72 virgins. Quran, Hadith and Islamic scholars all preach that virgins will be awarded to Muslim men in paradise. 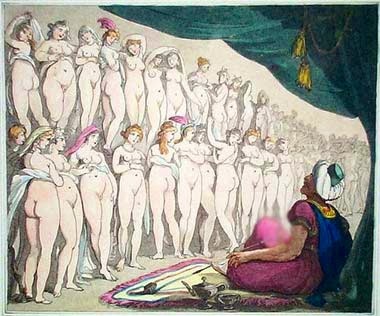 The most important thing with Moslems to emphasize, that unfortunately most fail to mention. It is that they do not preach the way to salvation is through Jesus Christ and that God is our Father.

Mel course, there is also hatred religion!
I know that there have been killings through Hinduism, Buddhism, harassment etc. Lutherans killed lots through, inter alia, witch burning etc. Catholics through its 1700 year history may have killed up nearly 100 million people through inquisitions, persecution etc.

Muslims have through its 1400 year history killed more than all together. The number should be about 300 million people. Not a good story right.

But we in the western world has also gone through some of the same as the Muslims are going through today. That other "rules" manifests itself than just blind obedience against some leaders who govern and decide everything.

I studied the Koran part some years ago

And where did I part discoveries, beside studying the Muslims. It is no wonder that there is so much trouble with Muslims and the Muslim faith. They actually look us Muslims as unbelievers, dogs etc. And we are heading against perdition etc. But those beliefs among Muslims should love 72 virgins when they come to paradise. Especially martyrs. But a lick faith that is both stupidity, unbiblical and directly inspired from the Evil, it will create problems wherever it arrives. And interrelationships among the Muslims there are problems, what they gather is their hatred for non-Muslims. Yes, they have some common beliefs mutually. But they contend much stronger than what other religions contradict themselves mutually by and large it all.

Here it is very much to say and write. But I will stop here and take in this article nor any of what I've written about Muslims before. And lets readers get "chew" and reflect on it.


Nr. 341: The Muslims look down on us believers and western, and want the most devout Muslim world domination as the Quran teaches!

The Muslims look down on us believers and western, and want the most devout Muslim world domination as the Quran teaches!

Acts 4. 8 Then Peter said to them, filled with the Holy Spirit in the people's rulers and elders of Israel! 9 When we today are caught in the interrogation of a deed to a sick man, if what he is healed by, 10 then be it known to you all and for all the people of Israel, that of Jesus Christ of Nazareth's name, whom you crucified, he whom God raised from the dead, by him are the healed of your eyes. 11 He is the stone which was rejected by you, builders, but which has become the cornerstone. 12 And there is salvation in any other: for there is neither any other name under heaven given among men by which we must be saved.

A Mosque is not only a place of thought and faith, but a place for politics and ideology as Islam includes in their faith and learn all about people, nothing is left out. It is a totalitarian and priesthood \ imam ruled that the Qur'an is the foundation of their faith and doctrine. Koran teaches that war is permitted only leads to expansion and domination of Islam


Nr. 318: Moslems have a true and correct image of God unlike any of the vast majority of Christians who believe in a triad-God!

Moslems have a true and correct image of God unlike any of the vast majority of Christians who believe in a triad-God!

Jesus himself did not believe and preached not know of any triad-god. But he believed and preached that the Moslems that only God the Father is the only true God, not himself, or the Holy Spirit.

Jesus called the Father of the God and Father, that we should do.

Nr. 94: Islam, Buddha, Darwin, communists and other religions and isms and sismer!

Islam, Buddha, Darwin, communists and other religions and isms and sismer!

Joh. e. 16 9 The sin is that they do not believe in me.
6. 28 Then they said to him: "What is the works that God wants us to do?" 29 Jesus answered, "This is the work God wants you to do: to believe in him whom God has sent." It is the sin that comes all people who do not want to believe and accept God's gift to us.

I think really that to oppose religion, atheism, big bang theory, communism and other ideologies through our blogs and website are the big main point, although in and of itself may be significant. But to counter the unbiblical preaching and teaching and what is right theology and doctrine in the Christian area, is instead very important and necessary.

What do people do today, regardless of ideology and beliefs?

It's simple faith in Jesus as your representative within its God, sin is not believing in him.

1. Tim. 2. 4 who wants all men to be saved and learn the truth. 5 For there is one God and one mediator between God and men, the man Christ Jesus, 6 who gave Himself a ransom for all. Such was his testimony when the time came.

The essence and what is important is to get in touch with God through His beloved Son Jesus Christ, everything else is not in accordance with what God desires and wants. Therefore, a "collect" all who believe in this, and confess that, as the abominations of the earth, says the Apostle John. While all Christian churches and preaching that shy away from God's word is a part of Babylon the great harlot.

No. 857: We as Christians are not obliged to know anything about Islam or other religions, but only what the Bible and preferably what the New Testament teaches and preaches!