Nr. 306: Sin lurks in everyone's life and heart! Its desire is for you, but you must master it in Jesus' name!

Sin lurks in everyone's life and heart! Its desire is for you, but you must master it in Jesus' name!

In many ways we have to call Evangelist and Dr. Emanuel "Nikolaus" Minos a chief Nicolaitans who can empty accept such a cruel and demonic man Pastor Jan Hanvold. Which is vulgar, a lost man and live in sin and adultery now with a 20 year younger wife who is number three (3) in the series while he was pastor and missionary, how far will come a falling away before waking up to true spiritual life to go before it can be too late! 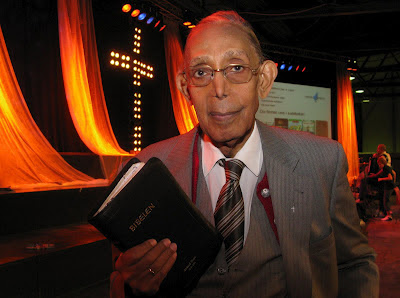 Protestantism is the way it has become today in many ways been more astray a self-Catholicism, with its Pope worship, what could the reason be? This is one of the themes in this article! James says such as Luther would have removed that faith without works is dead faith. The legacy of Martin Luther hangs still stuck where doctors excessive emphasis on salvation versus fruit that salvation is to create in our lives! This illustration picture where Cain killed his righteous brother Abel, and by it showed that he was unfair and a murderer. But his evil began in his heart and mind where all sin begins before the action and a crime.

This is taken from what the Lord God said to Cain when his hatred and jealousy of his brother got the blouse up and grab hold of his heart and mind so that he was a murderer! Sin did not begin when he did what he did, but it began long before that in his heart and mind. It's just that we also read about elsewhere in the word of God.

James 1 13 No man say when he is tempted, I am tempted by God. For God can not be tempted by evil, and he himself tempts no one. 14 But every man is tempted when he is drawn and enticed by his own desire, 15 afterward, when desire has conceived, gives birth to sin, but when sin has been fully matured, brings forth death!

The sin lies dormant in us all scripture says that we have something in our inner being which the Bible calls the flesh or the sperm that Satan has put in our hearts for all the Fall. Adam was the first to receive this p.g.a. his disobedience to God and obedience to Satan, since it has followed all his descendants. The only one who had this in his inner being, Jesus, God's own son. Apart from him, all menneskbarn this as a legacy. Luther called this original sin and it is not such a wrong and misleading terms and expressions form the Lutherans have gone too far with this. Among other Lutherans teach that also is expressed by the creed of the church every Sunday that we infringe and sins every day. This is just swarm risk and unbiblical as sinless proportionality doctrine is! The truth is that we as believers can overcome sin and let it not f power and influence with us. But we pass away, which unfortunately all do from time to time, so we have an advocate within its Father and g good for us there so that sin and our sins are not imputed to us. So long as we make up sin and turn away from it, this is what scripture teaches?

1. John. b 2 1. My children! This I write unto you that ye shall not sin: and if any man sin, we have an advocate with the Father, Jesus Christ the righteous, 2 and he is the propitiation for our sins, but not for ours only but also for the entire world.

When Protestantism broke up with the Hussites Jan Hus, John Wyclif, Martin Luther, Zwingli Huldreich and many more that broke with the Catholic church voluntarily or involuntarily? All this I see as a work of God about it in no way was perfect. Later, we have many other revival movements both at national and international levels. All that a spiritual vårfornyelse where new truths from God's word has been taken forward. All this is like a work of God, if anything imperfect as yet, a tool of God. Can briefly mention some of the truths that the various revivalist movements have brought forward. Do not see it as that I endorse everything and everyone, this is only as an outline to see that God works, although all movements from the Pentecostals of Catholics also have a lot of unbiblical teachings still in the "luggage" and we must see all the movements as sects because no one has been led up to the full truth, and become united in the spirit, soul and faith in God's word! Can briefly mention ten (10) various revivals or movements that have brought different truths to light. Not always entirely accurate, but still with a twinkle and light beams from the eternal world of God down to us humans. Glory to God and the Lamb from now until forever, Amen!

1) Lutherans and the Reformers that one is saved and justified not by their own deeds but by faith in Jesus Christ!

2) the believer's baptism, Baptists and biblical church arrangements whereby the faithful should train and be made to the disciples.

3) Methodists with a holy life in which one lives a life consecrated to the Lord and systematically seek God and live then!

4) The Salvation Army where the faithful not only preaches, but show care, compassion and caring for all, especially the poor and disadvantaged!

5) Free friends here in Norway and the like holiness movements that believe in a purified heart and thus the victory over sin here in time.

6) Jesus Christ alone, or only movement that teaches rightly that the baptism of three titles is a Catholic and unbiblical teachings. The first Christians baptized excluded only in the name of Jesus, so shall we do today, glory be to God and the Lamb!

7) Jehovah's Witnesses with who reject the unbiblical and demon-inspired doctrine of the Trinity. Where there is only God the Father and the feet are the only true God, and he has a son who came forth from him with a beginning, and the Holy Spirit is not himself but God's power and God's energy!

8) Adventists who reject the horrible and unbiblical doctrine of hell that is that the eternal God to torment, harass and torture the unbelievers forever. But they should be destroyed like Sodom and Gomorrah were.

9) In 1800 it was proclaimed for the first time in a long time that Jesus would come again to fetch the bride before nears went over this world. There, among other things, William Miller, John Nelson Darby and others who taught that there are different time households that we must and will relate to. After Jesus' return is the 1,000-year peace and Messiah kingdom of Israel and Israel as a twelve tribes in the center of world events!

10) Pine or revival movement that preached the baptism of the spirit and gifts of contemporary a strong love for Israel and the Jewish people!

Where are the Protestants Today?

Do not dwell on the Catholic Church and faith, but briefly mention how Protestantism is today in the Western world by and large it all. This of course is the brief answer, but will briefly mention the teachings and the spiritual level is on.

From my commentaries from Revelation 2 6 But the praise you, you hate the deeds of the Nicolaitans, as I do. If there were things that lack in the intimate social relationship they had God's word, however dear. Nicolaitans works is actually the apostle John was welcomed in his first letter. That one can sin with the body but still be a living faith. This is in brief what the Nicolaitans works is, to sin with the body yet to be forgiven and live with the Lord. This is of course heresy when sin is widely accepted both in our lives and churches. 15 Also you have someone with you the same kind, those who adhere to the Nicolaitans doctrine. The church at Ephesus had revealed Nicolaitans deeds. The church here had both accepted, legemilitert and there had been a teaching that the Bible describes as the leaven out of this. It refers to Jesus as the teaching of Balaam the same as Nicolaitans doctrine. Balaam blessed Israel but it led him to sin. He got the young men to commit adultery with the Midianites young girls while in session they worshiped their idols. We see that the life and teachings to conform to God bless.

What are the Nicolaitans learn?

There are several letters devoted to the New Testament to combat this terrible and dangerous doctrine. Among other things, Paul's letter to the Colossians and the Apostle John's letter. What is this teaching really about? Of course I can not give a satisfactory answer, and to shed light on this one should have written several books. But briefly, then learn Nicolaitans that God forgave always be a sin because God always forgave and spirit was always "clean" even though a sin with the body. This is where Protestantism in the western world has come, one has been Nicolaitans and adhere to the doctrine of Balaam son of Beor did, scary, serious but true! Nicolaitans doctrine is akin to Balaam. Nicolaitans were a sect which is said was named after a deacon named Nicholas. They taught a false Christian freedom, where one was not so much with idols and fornication, and who had a false doctrine of Christian fellowship. This began to make itself felt in Pergamum. It was not just the properties they should have shared, but all they would have in common. They went so far that they learned that they could have shared wives. This led to adultery, a sin against the sixth commandment. We see this today, even where such remarriage among believers takes place over a low shoe, Protestantism has been Nicolaitans or to put it another way, they follow Balaam Bero son learn and the way!