Nr. 307: False accusations against me from Pastor Torp in Oslo Church that I have a Catholic faith and a turbid source!

False accusations against me from Pastor Torp in Oslo Church that I have a Catholic faith and a turbid source!

Picture of Pastor Jan Aage Torp, who himself is divorced as a believer and now live in with a woman 20 years younger. Scripture is very clear here that as a pattern for the flock to be a woman's man, no more. It does nothing of Dr. Emanuel Minos and Evangelist endorses Pastor Torp when he is living contrary to the New Testament clear regulations on the marriage of an overseer! If church members follow Pastor Torp then those who are married only 1 Once divorce and find a new wife or husband. Has it not been chaos before the church of God, then it becomes at least then, you be sure! Pastor Torp is a pattern to the flock or church, that he is so rude and boldly testify only about his spiritual life is empty and unfit and those who believe in him are the same character!

1. Pet. 5. 3 Nor, as those who rule over their congregations, but so that I will model for the flock. 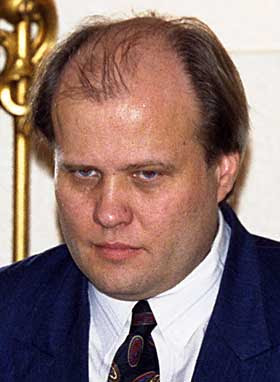 sed to get ugly and false accusations against me. There are more "normal" for me the last 30 years as a believer after I was baptized in the Holy Spirit. This printer Pastor Torp of me, putting out false and ugly rumors about me, my faith and teaching.

Pastor Torp writes: "I recently discovered the blog of Jan-Kåre Christensen, a Pentecostal preacher who runs mate coaches near our home in Southern Nordstrand in Oslo. His bus-driving, I appreciate. Currently there is enough with his scribblings, where Espen Ottosen raised and where he calls Emanuel Minos, Jan Hanvold & me "wolves in sheep's clothing", "gateway for demons" and he declares leprosy with King Uzziah ... I do not accept this type description of myself, and not by others. We should all work together to set a standard for respectful and acceptable coverage, regardless of the opinions. I smile not of curses, but let me tell you that I do not lose sleep either. It may be useful to know tankegrumset that unfold in the environment that I have uncovered in this blog post. On his website has Christensen posted a link to a text from "Two Shoes", a group of Norwegian soil working for the restoration of marriage - which in principle is good - but that parallel work by prayer and info apart demolition of marriages where the One or both are re-married. This is to some extent, a Roman Catholic view, but actually much, much worse, because in "Two Shoes", efforts are being targeted with "beans" that are nothing less than curses. Christensen has posted on its site a text that has been translated into Norwegian by the leader of this group. The link contains only a tiny part of the mind in "Two Shoes", which I know very well from real life. "Quote end.

Torp is to warn publicly against me that I have a Catholic faith and is in ledertog with two shoes.

All this has Pastor Torp posted on their website, and he's doing propaganda and promoting itself and its egosentrerte and sin fill lives, everything that Pastor and writer.

1) I have almost no knowledge of the two shoes before Torp threw his mendacious claims that I was in ledertog with them.

2) I have the same learning and believe that Jesus and the apostle Paul, who both taught that marriage is lifelong and that is adultery whether to remarry or marry a divorced as believers! That I shall be accused of having a Catholic faith is a huge hoax, false rumors and unfounded allegations all for putting me in predicament and that the focus should not be that Pastor Torp even live and walk in darkness!

Make your own reviews!

Now I've laid out everything and God said to me that I should copy what Torp had written when he was a liar, whore bucks and mega crook as Pastor Jan Hanvold and many, many others are in the "Christian Norway». Curses Torp has even brought himself to marry again after he has been divorced as Pastor and believers. And such persons scripture says that we will speak to the right, and then reject them and do not even eat with them! They will not listen and will constantly learn the truth but never to the knowledge of the truth in his own life. Therefore, they are more concerned with pointing out errors in others' lives than becoming conformed to his own life. Torp is and remains, unfortunately, a person proclaims that use big words and promotes itself but not Christ and the Word of God! It does not help profeiser over one's life if one does not live as God's word says. There is nothing a forger and seduces as leading the way!

1. Tim. 5. 6 but the one who lives according to their desires, the living dead. 8 But if any provide not for his own, and most of his household, he hath denied the faith and is worse than an infidel.

Pastor Torp, Pastor Jan Hanvold and many more customs are not his own house, but live according to their desires. This is also an end-time signs that Jesus' coming is near! Do you therefore ready before it's too late for the soon to encounter Jesus. Whether as your judge or deliverer.

Amos 4 12 Therefore will I do with thee, O Israel, so as I have said. And because I will do so with you, so do you prepare to meet thy God, O Israel!