No. 1495: According to Ferdigattest Byggesak AS, no wall has been applied for at the Hellerudtoppen in 100 years, but we were also guided to build a wall of the Oslo municipality, but from us they demand the impossible that we should have known more than our case officer!

No. 1495:
According to Ferdigattest Byggesak AS, no wall has been applied for at the Hellerudtoppen in 100 years, but we were also guided to build a wall of the Oslo municipality, but from us they demand the impossible that we should have known more than our case officer!

Picture of District Court Judge Edvards Os who let himself be seduced and let the lie win over eg. I had not been told that it was all right to build on old walls without applying.
After all, there has never been a wall application in the Stormyrveien before. That PBE should introduce a "new" practice was probably not true.
The fact that Edvard's Os would believe the lie over the truth cannot do anything for me, he will pay sooner or later and reap the fruits of his own life out of his own life. 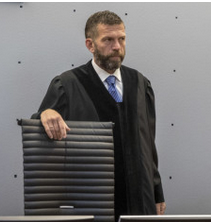 This is what Ferdigattest Byggesak AS writes in application to Oslo Municipality on behalf of us:

When assessing the current wall in ft. Other walls in the area also emphasize that the actual wall in no way is the largest wall in the area, neither in height nor length. We note that PBE points out that many walls are listed before the house plan became applicable. Initiators are then wondered whether these are legal, even if they have never been sought and the obvious must have been in conflict with both previously applicable plans and exception provisions in the Planning and Building Act. For this reason, we understand that the initiative owner - who himself thinks they have followed the municipality's recommendation - considers it unreasonable that one is the only one who is followed up.

The owner of the measure finds it even more unreasonable that PBE defends what the owner of the measure perceives as the neighbor's illegally listed wall in his argument against the owner's own wall. The initiative owner points out in this connection that it is not correct that the neighbor's wall is not in a regulated way. Whether or not the neighboring wall is listed illegally is unclear to us, but it is correct that the landlord points out that the walls on the complainant neighboring properties (both walls on the other side of the road and the nearest neighbor's wall) may appear to lie partly in areas regulated by road.

The owner of the measure cannot otherwise understand the significance of neighboring walls (at least some of them) being associated with carports. The walls are not lower, or affect the area or road surface less, for that reason.

It is not all the walls in the area that were established before the house plan became applicable. Several of the walls in the area appear to have been established after 2006. From the point of view of the case, we can not see that any cases have been registered in the Stormyrveien which concern explicit walls over the past 100 years.
We assume that some walls are considered in sc. other buildings, but notes that it may nevertheless appear that the owner of the measure has the right to say that several of the walls have not been subject to a material assessment.

Mht. natural transition towards the road, it is pointed out that the fewest sites in the area have a natural transition to the road. On most sites along the Stormyrveien, walls and or cuts have been established in one form or another. Several of these have the same size as the current wall.
(Quote end.)

A wall was built a few years ago, after we built several places in Stormyrveien. Blue. in no. 20, this only shows again and again that the Oslo municipality treats us completely differently than everyone else.

They did not want to give me dispensation because other walls that were built according to the housing development law in 2006 in i.a. The great road was built before that, which is not the case. Blue. The wall at Stormyrveien 20 is built after 2006 and it is just over 5 meters high.

Even when we meet them, and can document that PBE here in Oslo is wrong.
Then they will not admit that they have been wrong and let us get an exemption.

It is impossible to win when one meets the City of Oslo and the entire public agency, and they do not want to take this into account.

In this case we can prove that they have been wrong, even then they will not change anything. How can one then win when they are wrong and we accommodate them. Even then, do we not get a dispensation?

It is impossible to win when both the County Governor, the Civil Ombudsman and now the courts defend the City of Oslo. We can prove that they are wrong in many things, anyway they will not meet us and give us dispensation. This, of course, is pissy and so bad it can remain!

What is difficult in our case is that it seems to me that the entire public agency in Norway is rotten. How will one then win?
We have proven time and again that especially PBE here in Oslo is wrong. Others get to build walls 5 meters high if they want. Others get to use the plot exactly what they want.
The neighbor right in the street has used its plot 57 times more than us.
He has used the site for construction by over 60%. We have utilized the 24.64% which is only 0.64% extra and there is talk of a 5 sqm extra. While neighbor has exploited the plot so much to all concepts
is blasted!

Joh.e. 8. 44 You have the devil's father, and you will make your father's lusts; he was a murderer from the beginning and is not in the truth; for truth is not in him. When he speaks lies, he speaks of his own, for he is a liar and the father of lies.

God's od says that the devil is a liar, and does not stand in the truth. Therefore, I am confident of what we have experienced in our last two litigation that we have had the truth in. But the lie has gained, that it is under the influence of the unclean and demonic powers that people who have attacked us are.

Efes. 2. 2 as before, in the aftermath of this world, after the ruler of the powers of the air, the spirit now active in the infant's disbelief,

The spirit that works in Satan's children is lies, immorality, darkness, and other things. The scripture says further.

Joh. 10. 10 The thief comes only to steal and murder and destroy; I have come to have life and abundance.

It doesn't help how much schooling and anything else they have, the script says:

Word. 1. 7 Fearing the Lord is the beginning of knowledge; Wisdom and discipline are despised by fools.

Here the entire public agency in Norway surrounds with more lies than you actually find in Saudi Arabia, Congo and North Korea. They are sown in lies, darkness, and evil.

Here, neighbor is allowed to exploit the utilization rate of the plot 57 times more than us. And this is allowed, but utilizing a plot of some sqm2 extra that is 1.6 targets is not all right.
This gets PBE upheld in the court for + many other things. It only witnesses how bad Norway is. They are completely, totally out of the way in relation to the truth and what is decent, right and good!

Dear Believers, Jesus' friends, pray for the truth to come up for them, even though today they are out and about and have been misled by lies, malice, and discrimination. Something that God's word warns strongly against doing.

Word. 24. 23 These proverbs are also of wise men: the judge should not make a difference between people. 24 He that saith unto him that is guilty, Thou art innocent, the nations shall curse him; 25 But they that punish him shall prosper, and prosperity and blessing shall come upon them

Here the script clearly says the judge should not make a difference to people. When others make use of the plot 57 times more than us, and are successful. While we are going to tear, then make a difference.

Word. 28. 21 Making a difference between people is not right, but a lot of man supplies for a piece of bread's sake.

According to what God himself says in his own word, to make such a difference is not of good, but of evil.
It does not help to call it one and the other, such difference treatment is not right, good or neat, neither in the eyes of God or man!
It's okay that others get exemption, but they can't fail to give us too!
Lagt inn av Jan Kåre Christensen kl. 09:55