No. 1487: Marius Vamnes, who represented the County Governor of Oslo, wants us to demolish wall, staircase and storage room on our property, but he approved everything that Kjell Inge Røkke has built if there were thousands more "exceedances" than ours!

No. 1487:
Marius Vamnes, who represented the County Governor of Oslo, wants us to demolish wall, staircase and storage room on our property, but he approved everything that Kjell Inge Røkke has built if there were thousands more "exceedances" than ours!

See e.g. on the property of Kjell Inge Røkke where he supposedly got himself "free" stone other places in Norway?
Place the carved stone blocks of many tons into their own property.
If the little we've done, build a storage room a few sqm2 too large and should be demolished. Røkke has collected large boulders of many tons, and it is allowed. This approves Marius Vamnes, who represented the County Governor of Oslo. But he writes with the same "pen" that everything ours should be torn, talk of being "crook" in the eyes of my and many others. The natural thing is to approve everything that is built and placed on our own property. The stone blocks that are located on Røkke's property are probably taken "free" from nature some place (supposedly quarries in Larvik), and never bought by anyone and cherished to the real value, be sure. The rich have a "set" of rules. We poor and the public another "seen" with rules.
They must be defended, we "others" play the bingo with. 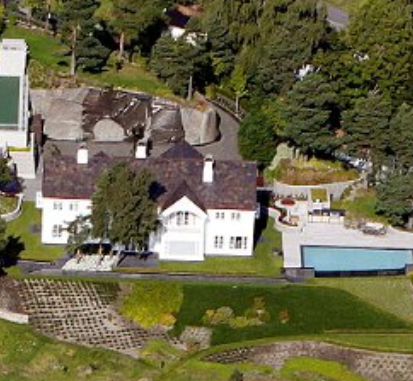 It is absolutely amazing what the County Governor does, without having been on a visit, it is clear that they know everything. The word of God says that pride stands for fall.

It was the wise king Solomon who said it.

Marius Vamnes who rejected this, for example, gave. Kjell Inge Røkke upheld and dispensed to build his solid villa. But he had money and influence, something we didn't have.

There is a difference between people, some get everything. Others are deprived of even what one has, but one day these people will also stand by God with their lives, what then?

But through the faithful prayers and good work, we will and will win this case. If we lose, we know that this is another word of justice!

Picture of Kjell Inge Røkke's property with large boulders up on his own property and out into the sea, what we have on our property is like little "queens" against what Røkke has. All he has is good, he believes, adviser to the county governor in Oslo and Akershus Marius Vamnes. What we have torn it as soon as possible means the same Vamnes. We live in a totally twisted world when such people can make such decisions and they can continue to do so. 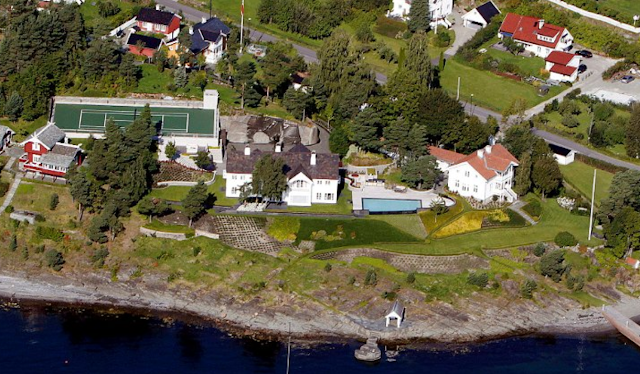 Who should complain if one does not win? In reality, the system, the people and everything is so much as the degrees are interwoven. It is very difficult, therefore, ask dear believing Jesus friends, the only opportunity!

In the shoreline we also find a small white bath house, and a small pier.
The pier is apparently made of natural stone. But the sight deceives.

Røkke has laid artificial rocks. Here the family can stroll out from the bath house and plunge out of the artificial pier, which looks quite natural in the distance

The jetty is made of stone blocks from a quarry in Larvik. The boulders are "clad" with a material so that it all looks pretty real. 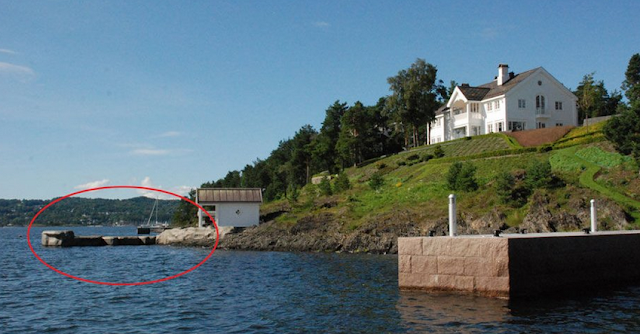 Retrieved from the newspaper VG:
The villa that is being built at Konglungen in Asker will be a total of 750 square meters.

- We appreciate that we have now been successful in what we believe to have been right and important, says Røkke to VG Nett via his press spokesman.

- Now we look forward to moving in, says a satisfied Røkke.

The case ended this afternoon.

- We considered Asker municipality's decision as correct. The legal conditions for the reason for the exemption are fulfilled, says adviser at the county governor of Akershus Marius Vamnes to VG Nett.

The smokehouse was first assessed by Asker municipality as approved the plans, but after complaints from the county municipality and neighbors, the case was re-evaluated by the county governor in Oslo and Akershus.
(Finally quote).

Røkke has collected tons of large boulders, built most of what he has wanted and is allowed to do everything. Everything approved by Marius Vamnes, while the same man writes about our trivial conditions where a stone block that Røkke has collected and cut adapted and transported onto his property and everything else is fully permitted according to the same man's terms. Talk about making a difference between people.
But okay, I believe that what Røkke has done is just fine for me and us.
What I do not agree with and do not understand, is that what we have done and built a necessary staircase, a necessary wall and a necessary shed must be demolished.

Look here for the refusals we have received, do not take the whole justification as it is totally false, and has taken this up elsewhere. 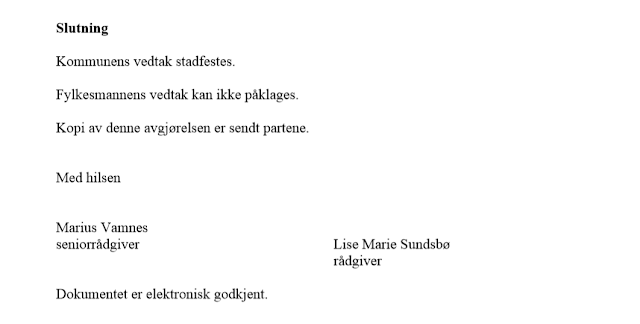