Nr. 629: I have been shut out of all discussion forums in the Christian context , thrown out of the meeting etc. because I've held up one thing, God's own words!

Nr. 629:
I have been shut out of all discussion forums in the Christian context , thrown out of the meeting etc. because I've held up one thing, God's own words!

Once, there were approx. 1985, I met a prophetic message that we were about to go more and more into the time that the word of God describes as Laodicea time. It was at that Karmøy Christian Center and Leif Jacobsen ordered me to tie set and afterwards we were , me and two to three second chased out of the meeting. By then Pastor Sten Sorensen, father of Sten Sorensen , Jr. .

This article is dedicated to those who tried to speak out , but that failed to withstand pressure or gave up . Unfortunately , many people have seen a lot, but to speak out again and again. And do not worry, but keep the truth and God's word forth year in and year out , it needed a double portion of the Spirit of God and even more grace.

Image of Nigeria falls. Such a waterfall , we all need to have in our lives and hearts to endure to the end . It is said of Smith Wiggelsworth stood at the waterfall and cried. Then he asked , so my soul God !

Joh . e 7 37 On the last and greatest day of the feast , Jesus stood and cried, saying , If any man thirst, let him come unto me and drink! 38 He that believeth on me , out of his belly shall , as the Scripture has said , will flow rivers of living water. 39 This he said of the Spirit which they should receive who believed in him: for the Spirit was not yet given, because Jesus was not yet glorified. 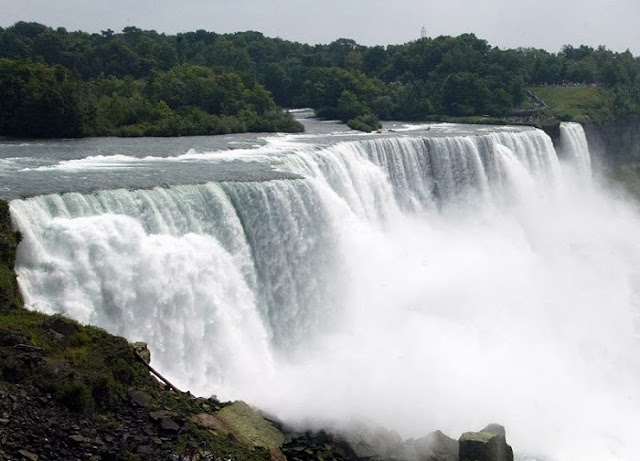 My meeting with the Christians was really very naive , but how "good" I had it!

I come from a background where I grew up in a home with a personal believer parents, although probably both believed in God and wanted me to live like a state church man.

So I was saved and born again . And I thought that Christians were the kindest people, but , but , that's right enough , unfortunately not !

What is it that makes that there are so many evil "Christians" who will control and manage others?

In many ways, today's Christianity very, very hypocritical and evil . By that I mean that one will emerge as very kind, tolerant, loving and good. But in reality they are believers anything but this. They are opposite, yes many times much lower than the world's children the most. This is deeply , deeply tragic. I am also amazed that no one responds to the way hundreds of Christians are treated each year in their own congregations . Have even been prone to being lifted up one moment and then afterwards to be treated like a criminal , prone to rumor-mongering and mudslinging from ward leaders . My experience is that I did many years as an itinerant preacher met many around around not being used , not being taken seriously and being outright cut down and mentally abused . How should it be change here? Of course I have not the complete and full answer here . But will give ten ( 10) things in shorthand format how things could be better .

1 ) Scripture says: Ephesians 4:25 Wherefore putting away lying, speak every man truth with his neighbor: for we are members one of another

Speak truth to your fellow man , always ! And berries are not secrets and hidden sins , it will be your downfall if you do not do it up and take hold of this.

2 ) Ephesians 4:29 Let no corrupt communication proceed out of your mouth, but that which is good for necessary edification , that it may benefit those who listen ;

As Christians, our speech be with meaning , good and positive.

4 ) Matt . 7 12 Therefore all things whatsoever ye would that men should do to you , that you also do to them: for this is the law and the prophets.

To live by the Golden Rule has been the watchword throughout life.

5 ) Matt . 5 43 Ye have heard that it hath been said, Thou shalt love thy neighbor and hate your enemy. 44 But I say unto you , Love your enemies , bless them that curse you , do good to them that hate you, and pray for those who persecute you;

It is when one gets stepped on , the one we are going forward .

To suit his own life , that's what leads than forward in the spiritual realm.

7 ) 1 Corinthians 6:7 It's already at a loss for you, that you have lawsuits against each other . Why suffer ye not rather injustice ? why stand ye not rather hurt ?

Being able and ability to endure injustice , it is a Christian virtue.

8 ) 1 Thess. 4 2 For ye know what commandments we gave you by the Lord Jesus. 3 For this is the will of God , your sanctification : that you abstain from fornication: 4 that each of you know how to possess his vessel in sanctification and honor, 5 not in the passion of lust , like the Gentiles who do not know God.

What is God's will? That we do not need to stoop to. It is our sanctification . And holiness is Christian ethics built on God's word that it is very, very important .

9 ) Matt . 6 33 But seek first his kingdom and his righteousness, and all these in premiums ! 34 So do not worry about the morrow ! for the morrow will be anxious himself for himself , each day has enough trouble of its own .

Seems this verse is gorgeous and a promise. Seek first His kingdom and His righteousness, we get everything else in premiums ! More lift than this is not it. It pays to believe in God , we sing , yea , I say .

10 ) Mat . 18 15 But if thy brother shall trespass against thee, go and tell him privately ! if he shall hear thee , thou hast gained thy brother ; 16 but he will not listen, then take yet one or two with you , that every word may be established by two or three witnesses . 17 But he is not on them , tell it unto the church: but he did not hear the church, let him be unto thee as an heathen man and a publican .

We will not allow sin in our own lives, it is very important. But not in someone else's life either, why should we ask other accountable for their sin. We should not have excessive respect for others, nor look down on anyone. But tell the truth to them.

Christian Norway will emerge as something they are not, and probably never will be either without a colossal upheaval which then must happen. They want to appear stately , kind and someone who "gets" it . But the truth is that they are by and large at a bunch of people living just opposite than what one would . One has no truth either in doctrine, life and heart, therefore, today's Christianity pathetic, narcotic and indifferent.

Could have written even much more , and much more extensive. But mention briefly how I have been getting shut out the blog of the different papers. Printer also for those who keep the word of God and are opposed and are squeezed out .

KS or Victory Cross began with moderation and the purpose was to shut me out . They are so incredibly out of control, that the current KS is just a pathetic newspaper , unfortunately . KS is and remains a tragic newspaper , which arouses contempt when it should be a Pentecostal newspaper and is more liberal one Lutherans and others.

The day locked me out because I kept the word of God. So did VL . But I got " bragging " of VL , but my posts and comments are created such controversy and its resistance . That they had to shut me out !