Nr. 622: How does work the evil today? Or what can we expect of Satan?

How does work the evil today? Or what can we expect of Satan?

Is Satan and demos a reality? Yes, but that's not to say that one can see him been a street corner while both Satan and God is Spirit. They are like two polar opposites in the spiritual battle where they stand against each other. But man is where this fight rather than someone else is expressed as man is the only creature of God as the filling has the ability and opportunity to become like God and have fellowship with him. This hate Satan so strong that he does everything in his power to ensure that this community will be groundbreaking. This happened in the Garden of Eden, but Jesus has healed and restored this relationship through his death and resurrection. Therefore, the cross and resurrection our surest signs and strongest knowledge that this brings us forward and victory in spiritual battle. Image shows from Jesus' tomb which says that all powers of evil are innovative and defeated by someone stronger than them, our Savior and Lord, Jesus Christ

Colossians 2:15 Having disarmed principalities and powers, and made them openly, shewing himself triumphing over them in it. 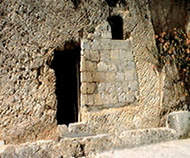 We are not unfamiliar with him and his methods.

2 Corinthians 11:14 And it is no wonder, for Satan himself transforms himself into an angel of light; 2 Corinthians 2:10 But that ye forgive any thing, and I forgive him, for what I have forgiven - if I had anything to forgive - I have done for your sake, for Christ's presence, lest we fool of Satan; 2 Corinthians 11:3 But I fear, lest, as the serpent beguiled Eve through his subtilty, so your minds should be corrupted and turned away from the simplicity and fidelity to Christ. 2 Corinthians 2:11 for we are not ignorant of his thoughts.

After thirty three years as a Christian, I have more and more experienced, seen and discovered that the real battle our place in our mind. Therefore, Satan will try to manipulate, get into a lie, P pictures and everything else that makes us unable and captures what God and God's word says. And what is the true reality, therefore, also says writing the following:

The battle - the spiritual battle - taking place in our minds! Where intellectual powers will have dominion which God's words are renewing our minds!

Satan distorts, manipulates and put into our minds so that we get a distorted picture of reality. As a rule, Satan does two things with us. Either we are proud, or so he sends us to the other end where we lose hope, faith and do not feel loved and appreciated. Both sides or parts Satan and demons intrigues against us, everything that we should lose focus. What is the focus for us? Living the Word of God, not by our emotions and thoughts. The non-believer has a clouded mind, the mind, Satan also we believers should get and have,

From my commentaries Ephesians 4 17 So I ask you earnestly in the name of the Lord: Live no longer as the Gentiles. Their thoughts are vain, God's word makes it ugjenfødte and carnal man very low. Therefore, we are encouraged to live quite the opposite. Unfortunately characterizes the world many times one church congregation characterizes the world. God wants us to leave a trace us. 18 their understanding darkened, and they are alienated from the life of God. For their hearts were hardened, so they do not know him. "For the god of this world (Satan) has blinded the minds of unbelievers, so that they do not see the light of the gospel of Christ, Who is the image of God." (2 Corinthians 4:4) "Everything is clean to the clean. But for those who are defiled and unbelieving, nothing is pure, but both their mind and their conscience are defiled. " The soul and the mind is therefore a battleground! And it's you and I who decides who will win! "Let the wicked forsake his way and the unrighteous man his thoughts, and return unto the Lord, then He will have compassion on him, and to our God, for He will abundantly pardon. For my thoughts are not your thoughts, neither are your ways my ways, says the Lord. For as the heavens are higher than the earth, so are my ways higher than your ways and my thoughts than your thoughts. "(Isaiah 55:7-9) As we see, there is a large contrast between the wicked thoughts and God's thoughts. The wicked shall leave their thoughts and ways, and partake of God's thoughts, plans and roads. This speaks of a total transformation of thought life. "And be not conformed to this world: but be ye transformed by the renewing of your mind, that ye may prove what is the will of God: the good, that which he delights in, it's perfect." (Romans 12:2) The word transform (Greek: metamorphosis) speaks of a total transformation. It also talks about being different than everyone else's. 19 blunted they have been, they have plunged into debauchery, indulge in every kind of immorality and chase after money. God's thoughts are primarily revealed in God's Word. Therefore we have to read much of God's Word so that the Word is allowed to work in our lives. It will gradually begin to transform our thoughts, attitudes and our whole sense. It is this that is the whole key. "How will the young keep their trail clean? By sticking by your word. I seek you with all my heart, let me not wander from your commandments! In my heart I have hidden Your Word that I might not sin against you. "(Psalm 119:9-11) "Thy Word is a lamp to my feet and a light for my path." (Psalm 119:105) God's Word is living Word. Therefore, they are life-changing. When God's Word penetrates the mind, the living power and helps you distinguish between God's thoughts and the human. "For the word of God is living and active and sharper than any two-edged sword. Piercing even to the dividing asunder (case) soul and spirit, joints and marrow, it judges the thoughts and advice. "(Hebrews 4:12) We must let the Word get guide us, teach us, convince us and raise us. Then we will be arranging for service in God's kingdom. "All Scripture is God-breathed and is useful for teaching, for reproof, for correction, for instruction in righteousness, that the man of God may be perfect, enabled for every good work." (2 Timothy 3:16-17) When Jesus was tempted by the devil in the desert, His mind was rock solid. He responded to God's Word. When we allow our minds are renewed, so too can we tackle both trials and temptations by keeping the focus on God's Word. Man in itself makes the flesh unfruitful works and thrives on it. (End of quote).

All that is from God or from God, Satan in one or more ways to stand against. This is a spiritual law. We read in Galatians about this that Ishmael persecuted Isaac, and tried to make life miserable for him. Why? Because Isaac was the birth of God's will, while Ishmael was born after the flesh and the lust will. This spiritual battle is inevitable.

But we should be standing after having done everything. This can be by being in Christ and live a life in accordance with God's word. The only way it is.

Just want to say finally, let these words and this teaching be a real in your life and in your church. Then we can experience God's grace and power is and remains a reality for all of us who have faith in the Lord Jesus and Father God!