Nr. 635: The Prime Minister of Israel Benjamin Netanyahu is no role model morally as unfortunately many in high places are not in the western world!

The Prime Minister of Israel Benjamin Netanyahu is no role model morally as unfortunately many in high places are not in the western world!

The Prime Minister of Israel Benjamin Netanyahu and his third wife besides all the other lovers he had, unworthy and little to be proud of for a head of state 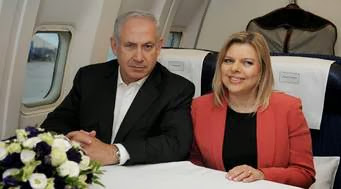 Fra Wikipedia: Netanyahu's first marriage was to Miriam Weizmann, who he met in Israel. Weizmann lived near Yonatan Netanyahu's Jerusalem apartment, where Netanyahu was based during his military service. By the time Netanyahu's service was finished, Weizmann had completed her own military service and a degree in chemistry from the Hebrew University of Jerusalem. In 1972, they both left to study in the United States, where she enrolled in Brandeis University while Netanyahu studied at MIT. They married soon afterward. The couple had one daughter, Noa (born 29 April 1978). In 1978, while Weizmann was pregnant, Netanyahu met a British woman named Fleur Cates at the university library, and began an affair. His marriage ended in divorce soon afterward, when his wife discovered the affair. In 1981, he married Cates, but the couple divorced in 1984. In 1991 Netanyahu married his third wife, Sara Ben-Artzi, a psychology major working as a flight attendant, whom he met while traveling on an El Al flight from New York to Israel. The couple has two sons: Yair, a Corporal in the IDF Spokesperson's Unit, and Avner, a national Bible champion and winner of the prestigious National Bible Quiz for Youth in Kiryat Shmona.

In 1993, Netanyahu confessed on live television to having had an affair with Ruth Bar, his public relations adviser, claiming that a political rival had planted a secret video camera that had recorded him in a sexually-compromising position with Bar, and that he had been threatened with the release of the tape to the press unless he quit the Likud leadership race. The crisis eventually subsided, with Benjamin and Sara repairing their marriage, and Netanyahu was elected. However, in 1996, reports emerged of his "close" 20-year friendship with Katherine Price-Mondadori, a married Italian-American woman.

The Prime Minister of Israel Benjamin Netanyahu is equal Pastor Jan Hanvold and unfortunately many in the Western world.

It is one of the animalistic and demonic appearing here . Where one can trust and entry by adding the most and most women who end up in bed with . This is like the force, it is in the animal world .

Barack Obama and Helle Thorning - Schmidt called flirtation by Mrs. Obama did not like. 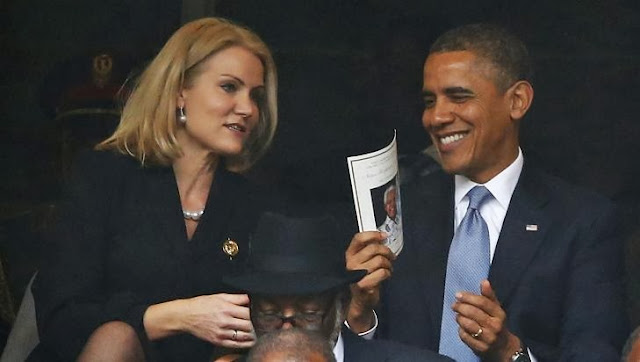 Michelle Obama behaved like a "normal" woman , this was resented . And good it is , but how many others do the same ?

This is from Wikipedia about lions : Flock dominant male is the one who has the right to mate . It happens that two males forming an alliance to take place as leader of the pack , and thus the right to mate . Migrant males who take over a herd will often kill kids by other males , since females then come in heat again . To ensure the right to lead their genes on. Lions mate throughout the year, but most often associated with the rainy season. The male can mate from that is about 5 years old. ( end of quote ).

In other words , multiple mating with greater power and territory . This is in the animal world , and so it is about to be in the western world. This is bad , because it basically is satanic and demonic .

Morality and ethics plays a major role among us humans no matter what faith or nationality we have. Polygamy as we find more sites, not least in Africa is also a lack of culture and that is basically not a good thing. Let us as believers to be a role model in the church where remarriage is not permitted is my clear request. I know one thing, God's Word clearly says that God created us to a man and woman should live life together. all without passing it is also without passing the good and holy will , according to him who created us.