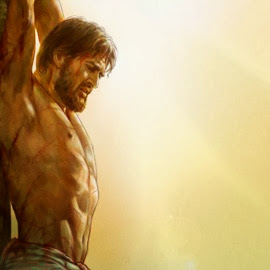 Realize that Aftenposten will that Muslims should get most of the word , not least because they are so good at building bridges . What we see in Muslim countries ? Indeed , Christians have by and large the whole not better , but worse . We must respect Muslims and their values ​​, but there must be life claiming that we do not believe in the same and the only true God? Muslims and Christians are really as far apart as the East is from the West when they do not believe that Jesus died on Calvary for our sins and rose again . Therefore, the cross, Jesus' death on the cross itself Christianity chewing and wear point.

The Swedish priest who is quoted in the Danish newspaper Politiken website comes with its theory " sober , subdued , indeed , almost gently , as if he also taste the consequences of their words ."

For nine years, Gunnar Samuelsson , priest and lecturer in theology at the University of Gothenburg , dug into thousands of ancient biblical and pagan texts in Greek, Latin and Hebrew to write his doctoral dissertation , writes Politiken .

He came to that - not once in the four Testaments of the Bible - given evidence that Jesus was crucified . After immersion and analysis of texts Samuelsson concluded that word testaments uses - cross - just as well could mean pole , pole , pole or tree.

In the Greek Bible translations use the word stauroun , which in the Bible is translated into crucified . But the word have other meanings, it might as well mean hang in other ways.

According to Christian tradition , Jesus was nailed to a cross (two beams intersect ) . But the Bible does, however, the Greek word " stauros " when it writes about Jesus' execution tool. Many Bibles translate this word with "cross" . But the original meaning of the word " stauros " is similar to the old Norwegian word " staurr ", ie a pole or stake .

In Galatians 3:13 , Paul writes the following: "But Christ redeemed us from the curse when he came under a curse for us . For it is written: Cursed is everyone who hangs on a tree. " Here Paul quotes from the 5th Numbers 21:22,23 , where it is clearly a matter of a pole / Wood , not a cross.

So, if it is correct , what does that mean for the most prominent symbol of the religion - the crucified Jesus?

This article was submitted as told Aftenposten. With this rationale : Dear debater ,

We choose to thank polite no to your post this time .

You are welcome to send us post later on .

All are welcome to celebrate Christmas as much as they want and desire. Now admittedly was not Jesus born in winter , but in the fall for both biblical faith and scientific interpretation. However, it is important and central to all the Christmas celebrations that Almighty God saw us fallen men in grace and gave his son as a prophet and savior of his own people the Jews first and foremost , but when they rejected the Son of God , the salvation given further to the nations that are all the rest of the world. It is the Jesus who died on a cross for all sin and guilt, and that was laid in the tomb for 3 days and 3 nights and then was raised again from death that we celebrate at Christmas .

Mohammad Usman Rana writes: " Muslims do not believe that Jesus was crucified or that he died , but was taken up to heaven , where he now lives ." This is not the crucified Son of God , that is Jesus Christ. Muslims in other exalts prophets and people here and there, but does not help much .

Therefore, it is not the Jesus Christ Rana reviews here , we celebrate . Rather, Muslims as all men must repent and bow down to the crucified Christ before they can celebrate the remedy July The whole message of salvation lies in the God gave his son the Savior of men . We must not allow ourselves to be deceived , we may in fact not save neither ourselves or others through good deeds that Muslims and other religions believe . It remains only through faith in Jesus Christ and repentance to God through him , we can experience salvation.

Central to the Christian faith is Jesus Christ's death and resurrection , everything else is secondary .

1 Cor. 15 1 I declare to you , brothers , that the gospel I preached to you, which ye have received and stands. 3 For first of all I gave you what I also received, that Christ died for our sins according to the Scriptures .

The gospel stands or falls that Jesus died and rose again .

Therefore, it is by no means the Bible Jesus Muslims believe and profess . There is another Jesus. What word of God says about these ?

2 Cor . 11 4b For you tolerate it very well so when someone comes and preaches another Jesus whom we have not preached. And all that goes over the fence are liars and cheaters , you must enter through the gate Scripture says , the door is Christ (the one who died and rose again ) to enter God 's kingdom.

Muslims thus has a different Jesus than the gospel shows us.

It 's okay to want both Muslims and others a merry Christmas but not due their faith in a different Jesus than the Jesus of the Bible , but rather that God's love in Christ Jesus extends to all if we are Christians , Muslims, Jews or atheists ! Do you accept this gift should you get and experiencing the living Spirit of Christ in your life .

God's great miracle is the cross, not everything else.

It is of course praiseworthy that Muslims believe in the virgin birth , his miracles , etc. But Jesus' main work - his great work - his death and resurrection. Taking a not so deceive one's self and others. We can not take away Jesus' death and resurrection , we do it so we do not have the biblical Jesus. It is the Jesus we celebrate who came to earth 2000 years ago and that all human life has become .

Merry Christmas to all !

In Advent , many Norwegian Muslims are asked whether they should celebrate Christmas. My answer tends to be that Muslims , with their passionate belief in Jesus , in reality, have more reason to celebrate the birth of Jesus than many non - Muslims. Although it is known in non -Muslim circles that Muslims believe in Jesus , to some extent , it is far from all who know Jesus , or Isa in Arabic, is one of the most significant prophets of Islam. A Muslim is aware of this and does not mention his name without adding "peace be upon him ." As many as 25 times the name of Jesus mentioned in the Qur'an, and several times he presented on indirect manner, as " son of Mary ", " Messiah " and " prophet of God ". For comparison, the prophet Muhammad's name to find more than five times. A separate Quranic chapter bears the name of the Virgin Mary , and she is referred to as an honorable and godly woman. With these qualities she works as a model for Muslims.

Belief in the virgin birth

Like the Christians think Muslims virgin birth. Lady's astonishment when she gets the news that she will bring forth a holy son is given in chapter "Mary " , "How well I have a son when no man has touched me ? " ( 7:20 p.m. ) .

Also belief in miracles performed by Jesus is something Christianity and Islam have in common. The Qur'an states that Jesus healed lepers and raised the dead. Not least Quran tells about the miracle in which the infant Jesus from the cradle defended his mother who was prone to malicious rumors by virgin birth.

Despite the similarities between how Muslims and Christians consider Jesus are numerous, he symbolizes also the key differences between these two monotheistic religions . Islam's strict monotheism which rejects the idea that Jesus was the son of God or a manifestation of God. In Islamic theology , he is an important prophet that brought God's message to mankind. Moreover, the ascetic Jesus a unique and privileged position in Islamic Sufism . The Andalusian philosopher and Sufi Ibn Arabi advent in the 1100s characterized Jesus as his first teacher and found big inspiration in him.

But Jesus is not only an important prophet for Muslims. In traditional Islamic understanding of the world trend towards doomsday holds Jesus the whole role. Muslims do not believe that Jesus was crucified or that he died , but he instead was transported to heaven , where he now lives .

At some point he will then come down to earth to defeat the Antichrist and establish peace and justice. According to the Qur'an God let his enemies believe that it was Jesus who was crucified : " ... they killed him not , and they crucified him not, but it seemed so to them" ( 4:157 ) .

Read through what I write, do you have any comment ? Write on the blog. Have more questions ? Send them to me , God bless you and yours in the Lord Jesus Christ !