Nr. 411: We live in the time period of the Laodicean church!

We live in the time period of the Laodicean church!

Now reunited once all believers under one umbrella where one believes in a pagan triad God to torment all non believers forever. Further away from the truth can hardly enough come when God is not three but one and those who will not believe in the Son of God (not three titles), will be destroyed like Sodom and Gomorrah! Illustrative image of fire that struck Sodom and Gomorrah 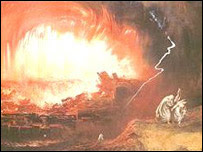 From my commentaries on Revelation church in Laodicea: