Nr. 374: The "true" and the nominal Christians have always and will always persecute those who are God's legitimate children.

The "true" and the nominal Christians have always and will always persecute those who are God's legitimate children. The change of this happened after the apostles died? The Catholic Church and the Lutheran church together have killed, persecuted and excluded millions of people. Muslims today are like "little boys" to calculate what they stand for by undoing! 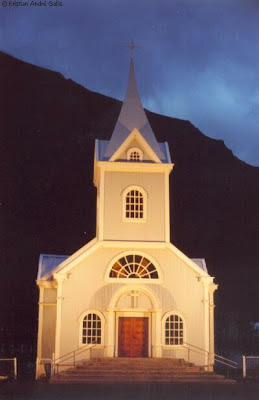 Joh 16:2 They shall put you out of the synagogues: yea, the time cometh, that whoever beats you to death, will think that he doeth God service. Acts 8:29 p.m. I know that after my departure shall grievous wolves come in among you, not sparing the flock.

There are many illusions and reality perceptions that the so-called Christians. One is that it is Islam or the homosexual believers who are our "enemies." But our real enemy is our own self-righteousness, self-indulgence and a distorted image of reality.

The apostle Paul said that after his death they should ravenous wolves and false Christians come into the believer. This also happened and culminated in the Catholic church at the 300's when it was the fake and not the real ones who was in the "driver's seat".

But it is also currently in Norway so, which one sees himself self-aggrandizement glance. Here is an excerpt from a debate in the so-called Christian newspaper day how one looks at themselves and look at the others:

As a Christian, one must ask themselves from the Bible - which road leads to Heaven. The answer is: only through Jesus that the Gospel and the Bible explains - all other roads lead to hell. Or are there other paths to God? The big difference with going to a Christian church and a mosque is huge. Mon bearer of an inner unrest / war into a church - should be able to go out with an inner peace after a worship service where compassion, tolerance and peace is the Gospel message. If you go to Friday prayers at a mosque will come out as a bloodthirsty monsters after you have been encouraged to hate and intolerance. There is a chasm of difference ..... (End of quote).

Here we see that a "believer" to rise above others, but he has reason to do so?

Looking at the history of Christianity is the cruel, wicked and nasty! But today, many of the faithful, especially Katolikere and Lutherans become very much changed from murder, plunder and persecution and boycott of others. But have they really changed? And become like Jesus and seized him? And what is true Christianity?

True Christianity is Christ, nothing else hallelujah!

It is to the extent that Christ is formed in us that we are true believers, and that is what is the central message of God's word, Christ!

The solution is and remains Christ, nothing else!

Christianity and Islam we come together in a super-church!

We know the word of God, especially the Book of Revelation that all false religions, even the "Christian" will be united in a super church (read my commentaries on Revelation 17-18). The only way out of this is the Christ, he is the solution!

Christ is the one and all! It is Christ Jesus that saves us, but that's as far as he is formed in us that we are sanctified. Sanctification is that Jesus Christ is formed in us.

From my commentaries Hebrews 10 1. The law having a shadow of good things to come, not the things themselves as they really are. Year after year it carried an offering that is still the same, but with these there is no law able to make those sacrifices, perfect. The law was good, but temporary. We should never look down on the law for the express will of God. But it requires obedience and tell only the truth, that we humans are not in ourselves are capable of doing. Rom. 7. 12 So the law is holy, and the commandment is holy, just and good. Because that God the Father was never 100% satisfied, you needed tirelessly with victims when the law says that anyone who sins shall die. 2 Otherwise, the well ceased to sacrifice? For if those who participate in the service, had been cleansed once for all, they would no longer have any consciousness of sin. But it was not only God the Father was not satisfied, but those who lived under the law likewise. Even the High Priest went into the Holy of Holies once a year could not be 100% sure if he came out alive, therefore tied a string around Mon foot to pull him out, in case he died under God's judgment. 3 But the victims are an annual reminder of sins. Yet this has its positive aspects. It says that human beings are sinners in need of salvation. That we are aware of our needs is the first step in the right direction. 4 For the blood of bulls and goats could not possibly take away sins. Then this is obvious: the blood of bulls and goats could not possibly take away sins. Had they been able to so sin had been removed when the law was in operation for approx. 1400 years and it was sacrificed million and totaling billions of animals, especially during the holidays in Israel. 5 Thus says Christ at his coming into the world: Slaughter Sacrifice and offering thou wouldest not, but a body made you able to me; We read that he had become like one of us to save and redeem us. Joh. AD 1 14 And the Word became flesh and dwelt among us, and we beheld his glory, the glory as of the only Son from the Father, full of grace and truth. 6 burnt offerings and sin offerings you did not you. It was not the Father's perfect will that animals were dying for some people to go free. But he could have mercy and show mercy to Israel so it seemed a temporary and partial remission of sins. But it was only when the Son Jesus Christ that life and immortality were brought to light and we human child could fully take part in salvation and a complete remission of sins. 7 Then I said, Behold, here I come to do your will, O God. The volume of the book it is written of me. Jesus did the will of God to the letter. But he also had the necessary qualifications to do so completely. It was all for him. Joh. e 4 34 But Jesus said to them, "My food is to do the will which hath sent me, and to complete his work. 8 First he said, "Sacrifices and gifts, burnt offerings and sin offerings you did not want and did not you," even though it is such sacrifices as carried forward by the law. Had the law brought fulfillment, eternal happiness and salvation Act had been good enough and sacrifices, gifts, burnt offerings and sin offerings you have been able to save. Had there been no sense that the Lord Jesus came. 9 Then he said: "Here I come to do your will." He abolishes the first words mentioned, to have the other effect. By Jesus' entry into the world on a switch. All that the law represents is replaced with grace and life in Christ Jesus. In the fourth chapter of Galatians, Paul says so strongly when he writes. That he compares the law by the slave woman and what one would do with her? Gal. 4. 30 But what does the Scripture say? Get rid of the slave woman and her son! For the slave woman's son will never share in the inheritance with the free woman's son. 31 Therefore, brothers, we are not children of the slave woman, but of the free woman. 10 By virtue of that will we have been sanctified through the body of Jesus Christ was sacrificed once for all. This scripture here is very powerful. The law remains in force for the self-righteous and the wicked man. But we die away from it all and Jesus both Savior and sanctify us through and through. When we experience what Paul writes in Gal. 2. 20 I no longer live, but Christ lives in me. The life I now live in the flesh I live by faith in the Son of God who loved me and gave himself for me.

Final Comment: This could be a lot, but it does not mind going to a church or church without Christ moves into the heart by faith. And his wines more and more figure in our lives with a daily walk where we deny our carnal desires and needs. For Christ to get more and more foothold. We as believers are no better than other people, any worse. But we do not have Jesus, we are "better" than others because he is perfect and good!