I and my wife were here in May month. In Rome in 1 week. It was a wonderful experience, but the Vatican perceived the occult as it lay dead Popes round in a row. While in St. Paul Church was a good presence of God, one could notice a marked difference in the Vatican and St. Paul's Church. As for the one who knows the difference between good and evil in the spiritual plane. Photos from Paul church which I recommend everyone to make a visit, and be there to pray and feel the atmosphere for it was here that Paul died after completing the course and kept the faith in Jesus as the son of God and personal savior. NB! It is I who have taken pictures of the church and my wife Berit N Christensen 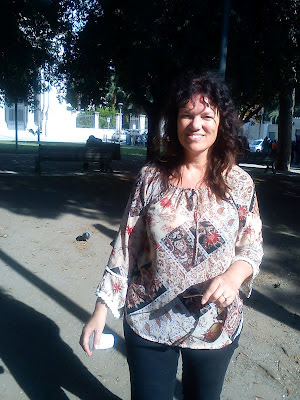 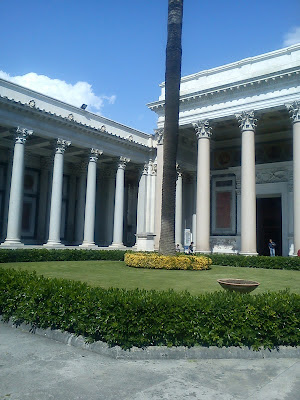 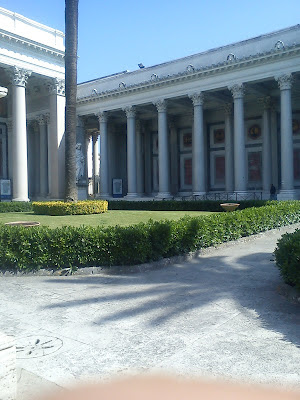 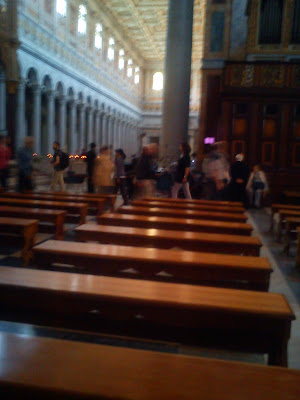 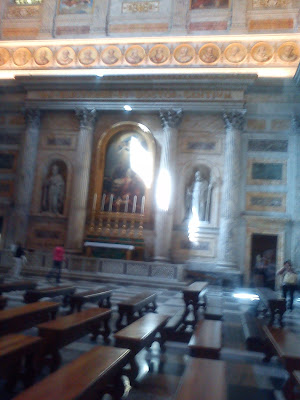 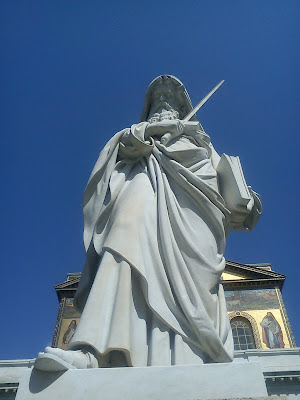 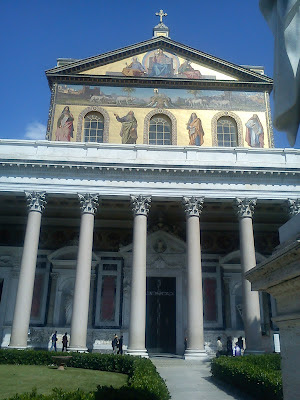 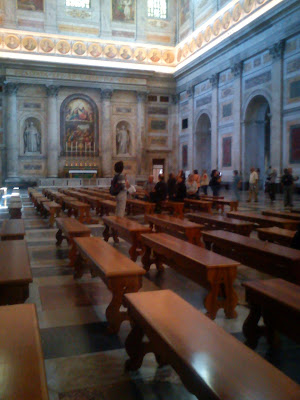 Who Jesus was not, it is important to find out about this when there are so many misconceptions of Jesus out walking among both believers and non-believers. Eg. when I talk to many it's their misconception of Jesus so that they will be faithful and holding them back. Here the erroneous Trinitarian doctrine main blame simultaneously with the name Christian has given himself out to be believers a large part of the blame. But let us take seven (7) points that show who Jesus is before we go into who he is.

1) Jesus is not God. 1 Tim. 1. 17 But the eternal King, the immortal, invisible, the only God, be honor and glory forever and ever! Amen. We must never equate and compare Jesus with the eternal, invisible and immortal God. The only true God. Only the Father from before time, Jesus has come and brought into the time of Father all creation and all the other people are. Therefore, Jesus is not God, that Jesus is mentioned in the New Testament few places that God is a completely proven have translated the word of God wrong for it to match the unscriptural trinity doctrine. Jesus is not God, but only the Father, God the Father is. But he has shown us who God is through being the Father 100% obedient to one and all. Joh. AD 17 3 And this is life eternal, that they might know thee the only true God, whom thou hast sent, Jesus Christ. The only true God is not Jesus, but God the Father!

2) Jesus is not a socialist or capitalist. 1. Joh. b 3 8 He that committeth sin is of the devil, for the devil sinneth from the beginning. For this purpose the Son of God manifested, that he might destroy the devil's work. Jesus was manifested to destroy the works of the devil, not to reform or capitalize the world. Jesus's main task was to make up with Satan, he did at Calvary on the cross. That one makes Jesus a socialist or capitalist is and remains completely wrong. Of course there is nothing in Jesus' message that speaks about justice and material blessing, but to put Jesus into than this context is to warp the Jesus whom we find mentioned in the New Testament on the roughest!

3) Jesus is not anti-Jew. Joh. AD 1 11 He came to His own, and His own did not receive Him. And 4 22 In the worshiper I do not know, we worship what we know, for salvation is from the Jews. It is important to understand that Jesus stood up in regard to the belief that Israel and the Jews had and have today, but that he is the fulfillment of all that the Old Testament points forward to. And Jesus himself by not up production to normal Jewish faith with the vision in one God and everything else. All this clutter and unbiblical mindset came among those who professed his name and called themselves Christians after the death of the Apostles, which Paul himself said. Ap. gj. 20. 29 I know that after my departure shall grievous wolves come in among you, not sparing the flock; 30 even among yourselves men will be perceived as leading perverse speech to persuade his disciples after him. (End of quote). Notice that Jesus and the early Christians seemed always in conjunction with the Jews, even when they went out to preach the gospel always sought out the first synagogues. He taught the gospel that Jesus himself is the fulfillment of all that Moses and all other prophecy spoke of. And what the law prescribed. It was after the death of the Apostles, and not least by the Catholic Church so much strange and unbiblical ideas came in, which unfortunately today we find that a large crater in all Christendom. And unfortunately, the Protestant churches have also retained much of the occult and unbiblical mindset as the Katoslek church came with from 300's and up through the centuries as they always persecuted, killed and boycotted the true believers. One of the first things they did was to ban Arius who claimed that Israel's God was the only true God as His Son Jesus Christ was created \ begotten of the Father as the Bible also teaches!

4) Jesus was not one with Satan. Joh. AD 14 30 I will henceforth not talk much with you: for the prince of the world comes, and he has nothing in me. It is a doctrine that states Jesus died spiritually or JDS doctrine that Jesus was one with Satan. This is one of many teachers who are dubious about Jesus. Jesus was clean from the day he was to the future of tomorrow, throughout his earthly life and it is also the day. Everything else is and remains meaningless. That many within its religious movement has proclaimed this makes it more biblical because of that. It's just what the New Testament and what the Old Testament teaches about Jesus are true, biblical and correct. Now I must also mention that there are a lot of Bible verses that are wrong or misleading translated, that's why I \ we want to translate the New Testament again.

5) Jesus is not Catholic or Protestant. 1 Cor. 6. 17 But he that is joined unto the Lord is one spirit with him. Throughout church history there have gone and done very much, and too much can not be denied by Jesus. Therefore it's a mistake to put a = behind everything that Christians do, think and believe. Many times one has to put a large and clear rear minus, not a plus. Now there are many good and fine believers, yet it has over 2000 years of church work occurred all too much like shadows of Jesus, and not said who he is and stands for. It is always difficult to get through to the people who have negative experiences with those who profess His name, therefore it is important and necessary to point out that there is a large or a small gap between those who believe in Jesus, and Jesus himself . It's about making sure this gap is as small as possible when those who profess His name shall and must follow Jesus in one and all!

6) Jesus is the archangel Michael or another Angel Bible by name, but the angel of the Lord's messenger. A very few angels are mentioned by name in the Bible. The most famous is Gabriel, who was sent by God to the prophet Daniel and Zechariah and Mary in connection with the births of John the Baptist and Jesus (Dan 8.16; Luke 1,19.26). Also archangel mentioned (Jude v. 9), and Daniel describes him as "the chief of you '(10.20) and" the great prince "(12.1). See also Dan 10.13. It says in Revelation 12 , 7 that "Michael and his angels fought against the dragon.." He's Angels leader and prince of the host of heaven. During the apocryphal books referred to an angel named Uriel, who came to Ezra (4 Ezra 4.1), and the Archangel Jeremiel and Rafael, who came Tobit (Tob 5:4). Most notions of angels, their hierarchy, the names and whereabouts of shipments from the three Enoch books that we have on our website under books. It's called the angel of several places in the word of God, and some people, this is Jesus, other people do not. What is certain, Jesus is not Michael or some other angels with the denomination's own name. The name of Jesus is the Christ, the Messiah. We will come back on in the next two articles about Jesus.

Jesus is 100% God and 100% man. 1 Tim. 2. 5 For there is one God and one mediator between them God and men, the man Christ Jesus, 6 who gave himself a ransom for all, a testimony in due time. It is asserted without biblical and logical coverage that Jesus is 100% man and 100% God is a completely pointless and foolish thought and viewpoint. Only God the Father is God, no one else in the true sense. Jesus is man it is right here and God the Father is God. It is therefore appropriate to seat up this way:

It is allowed to use head and use common math as the Bible itself does, the word of God is not real stupidity. Or should one be stupid and believe in mysticism and the other from Satan to follow God? Never! God calls us not to do so, that is what Satan does. Make sure that you do not follow God if you follow people and believe in a three agree confidentiality doctrine is unbiblical, illogical and pointless!

Final Comment: Now there are two articles to about this topic, and they are going to focus on who Jesus is. Here we focus on who he is, so that one can see contrasts and through this we shall be the true and biblical Jesus Christ!

Jesus, the only, holiest, purest name of human lips is added! Fullness of glory, fullness of love, fullness of grace and truth and power! _ Hardship facing me - never encounter me away from your holy and mighty embrace. People forget me, O Lord, hide me fast to your heart and mention my name. _ Lord, hear me, O Lord, lead me how and whither it serves me best! Give me to bend, Teach me to indulge me according to your will while here I'm a guest! _ You are the only one, holiest, purest, give me your pure and holy mind! Save me from the snares, rescue me from danger, take me to the last in your glory in!