No. 1440: Cohabitation ethics - A document prepared by Theological Reflection Group in the Pentecostal movement, is unfortunately a mighty work and dangerous seductive when it opens up for remarriage before one spouse is dead!

No. 1440:
Cohabitation ethics - A document prepared by Theological Reflection Group in the Pentecostal movement, is unfortunately a mighty work and dangerous seductive when it opens up for remarriage before one spouse is dead!

Picture of the Pentecostal Movement three great spirit chiefs at the beginning of the Pentecostal revival.
Pastor A. Endersen from Denmark, Copenhagen. Pastor T. B. Barratt from England / Norway, Oslo and Pastor Levi Pethrus from Sweden Stockholm 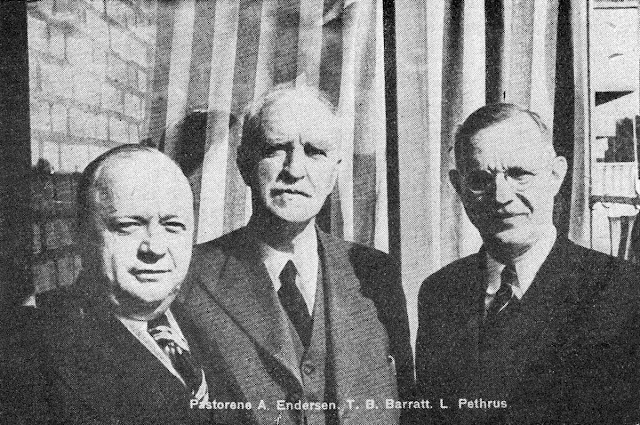 There are several things in this document that are bad.
The worst is undoubtedly the words Pastor T. B. Barratt. This is pure and delicate story fake, nothing else.

They write for example. this and then they cite Barratt.

This sight is also lifted by Barratt. In the book Marriage, Divorce and Remarriage, he writes:
If one marries another woman or husband, when the spouse does not commit adultery, then one is guilty of adultery (forced divorce except). But if the wife or husband has committed adultery, and then one goes and marries, one does not commit adultery! For the good reason that the first marriage is dissolved
(Quote end.)

This is a Barratt quote. But this was not the Pentecostal proclamation in 1932 and around there when Barratt wrote that book.
He laid it before the elders council in Philadelphia, Oslo, and it was voted down.
In other words, they refused Barratt both to give it out and stand behind that preaching as they saw this as unbiblical teaching.
It was released well 25 years ago or around in consultation with his family, but then this "apostasy" message "fit".

Furthermore, they do not realize that marriage is an example of the church and Christ. If we are unfaithful and fail, does Christ fail? Never!

Back to the storylessness - it's bad when they've been together for 5 years as they write and haven't settled into history.

In short, remarriage among believers was in fact completely excluded by the church almost 2000 years of history. Before the Reformation, the humanist Erasmus from Rotterdam presented this in the 16th century.
Read it yourself here and in Øyvind Kleiveland's answer.


Here are some excerpts from there, and the articles you can read are here:

Here is Brother Øyvind Kleiveland's writing which is reproduced with permission and obtained from ToSko's Facebook page.

The Pentecostal Theological Reflection Group came yesterday with its conclusion on marriage, divorce and remarriage. And that's sad reading.

In the early part of the text, the group claims that "the innocent party must decide whether the marriage should be terminated or whether there is hope for restoration". Not even throughout the document is mentioned that the thesis of the "innocent" party did not appear before Erasmus from Rotterdam presented this in the 16th century. The Bible has no references to "the innocent party" and the command of God's Word is that everyone should honor the marriage, which one does not get the feeling that the reflection group does in this conclusion, which has taken them more than five years to produce.

With statements like "Maybe we should have a greater focus on how to preserve the marriage than to debate for and against divorce and remarriage?"
"," There are no biblical texts that give unambiguous answers to the problem raised here
"And" No one will argue that the path to restoration of family life will happen if we forbid divorce and remarriage
"Shows that the reflection group has probably lost all relevance. When they move into thoughts like "should we have an alternative marriage ritual for those who are remarried?"
"So you realize that this fight they do not intend to address, at all.

Who's been talking about banning anything? People do what they want, anyway. What is important is to make God's command, to honor the marriage, only between a man and a woman who has never been married before, as the only approved cohabitation between humans. This must be done in speeches, conversations, book form, by articles by all preachers, priests, pastors, and rulers in our country. It is the only way we can make the Lord's will happen, on earth as in heaven.

Everything else is not in line with God's word, no matter how much the Pentecostal movement claims there are cases where marriage will not be "practical"
”And asks the question“ how long do you have to wait before you get married again?
"And claim that it is possible to" wait too long
"To get married again.

The book is referred to several times as T.B. Barratt wrote about marriage, divorce and remarriage, which was never released, when the elders council in Philadelphia did not allow Barratt to release this, when it fought against the word of God. The book was first published several decades after his death.

What appears to be a total lack of knowledge about the relationship between Mary and Joseph, as betrothed Jews who had not yet undergone the second feast of the betrayal phase (Nisuin), is almost comical to read about. Jews were allowed to give their betrothed wife (still not married) a divorce letter, in the betrayal phase, if evidence of adultery had been found. This is not the case in John 8, where the woman was caught in adultery after Nisuin was executed. We read that punishment was stoning, not divorce.

We also see this in Pauli's letter to the Corinthian congregation, where he writes to those who are "redeemed from a wife," in other words, Jews who had taken out divorce in the betrayal phase, just as Joseph considered doing to Mary. If Mary had been unfaithful in the faith phase, as the Jew Joseph believed, he would be able to marry another, and that would not be a sin. Now we know that Mary was pregnant with the Holy Ghost, and that Joseph actually married Mary (took her home to him), but this lack of knowledge of the reflection group is grave. In the English Standard Version Bible, we see that they actually include the words betrothed, in order to bring out the meaning that this permission applied to Jews who had divorced in the betrothal phase, not western divorces, where one did not have a betrothal phase which for the Jews was extremely important.

Now concerning the betrothed
, I have no command from the Lord, but I give my judgment as one who by the Lord's mercy is trustworthy. I think that in view of the present distress it is good for a person to remain as he is. Are you bound to a wife? Do not seek to be free. Are you free from a wife? Do not seek a wife. But if you do not marry, and if you have a marrying woman, she has no idea.
1. Cor

The most serious thing about this reading is that the marriage is basically regarded as a contract, which - under the "right" circumstances - can set aside. You get no understanding that holiness, honor, and a bond are only separated by death.

Finally: Jesus' own words that as long as one is on this earth, one is not right on a new wife, seems to be completely away from the Pentecostal Theological Reflection Group:

Then Jesus answered and said, "Verily I say unto you, There is none that hath forsaken houses, or brethren, or sisters, or father, or mother, or wife, or children, or fields, for my sake, and for the sake of the gospel, which shall not return a hundredfold now in this. time, houses and brothers and sisters and mothers and children and fields, along with persecutions, and in the time to come, eternal life. But many who are the first will be the last, and the last ones the first. "
Mark 10: 29-31

Here we see that Jesus says that even if you were to have the choice of following Jesus or leaving everything you have for his sake and the gospel, you are not right on a new wife. And this is not so weird, since God has already told us that it is only death that separates a man and a wife who have not been married before?

As I said, do not be seduced by the secular currents that have crept into the Pentecostal Movement, and which the Theological Reflection Group promotes in its document!