No. 1531: Rejection from county county again and our answer!

No. 1531:
Rejection from county county again and our answer! 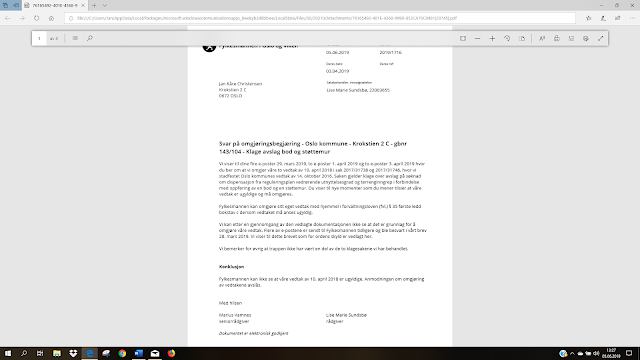 Answer regarding rejection to the County Assembly in Oslo and Viken.

As expected, this inquiry was not taken seriously.

We have received oral guidance and approval to build the wall. Without it, it had never been built.

There is only a few sqm2 sports booth built on our own property, which means that our sports booth will be demolished. It is completely meaningless.
The booth is only for the benefit of everyone.
When neighbor is allowed to build at the same time, and after us both the utility shed, carport and other things.
Utilizes the plot 57 times more than us. Then it is completely incomprehensible that they are allowed to have their standing and we had to demolish when all that we have built is actually not a single negative thing with.

Don't understand what you're doing. See that Marius Vamnes was in the process of approving all of Kjell Inge Røkke who was just a thousand times more "illegal" and "dispensations" than us.

Just all the stone he got was several times our plot.
There is still a big difference between people in Norway.

That we had to and should tear this that is so perfect and not get dispensation and when we have received oral approval and it turns out in hindsight that everything that is built is not for the sake of anyone. Only in favor and there is talk of minimal conditions for which dispensation is needed.
Then there are obviously gross and meaningless service errors by all state agencies.

Will never tear anything down or bow down to such rigid and lying conditions staged by PBE, and followed up by all the other state agencies that have had to do with the matter.
It is the County Governor, the Civil Prosecutor or the court.

Looks at the neighbor who has the same type of house as us and who has also now been allowed to build. It looks so artificial and ugly with lowering the terrain and houses appearing as an even more colossal colossus than necessary since everything called nature, diversity and mold is gone.
PBE is anti-environmentally friendly, now there is a wall but a slope down the road with grief for the neighbor to have what PBE has decided it should be.
But with us it is neat and dry, but we must tear.

Of all the arguments used against us, it is actually not one that has stuck. Do not believe in a thing of what the government agencies are doing when everything is in our eyes rail arguments and fabricated lies and half-truths that are used to us for all that is worth.
What we have come up with is everything. Therefore, PBE has a tactic, no response just overrun us. This is so much abused by the power that words do not extend to !!!!!!!!!!!!!!!!!!!!!!!!!!!!!!!!!!!!!! !!!!!!!!!!!!
The fact that you find no errors and see that PBE decisions are invalid is just sad!