No. 1526: Every time we have been in the grip of the "public" Norway we have behaved honestly and well, it cannot be said about them!

No. 1526:
Every time we have been in the grip of the "public" Norway we have behaved honestly and well, it cannot be said about them!

We have been clinging with a number of authorities, agencies and other public institutions.
Everything is really something incomprehensible as both I and my wife are 100% honest and honest in our journey.
Why is this happening anyway? As we see it, there are spirit powers that trigger various people. Scripture says this in Ephesus. 2. 2 as before, in the aftermath of this world, after the ruler of the powers of the air, the spirit now active in the infant of unbelief.
The Spirit that works in the children of unbelief is nothing but Satan and his demons, which make people do such things that are without purpose and purpose.

Although it seems that we have not always won with our arguments, it is that the authorities and the public agencies we have had to do have "settled" everything with various cunning and dishonest tricks, etc.
They have manipulated, lied, neglected our arguments and (mis) used the power to say to their advantage and our backs. Promised and lied has actually been a red thread with our experience with the public. It simply does not work satisfactorily and as it should be done simply in our opinion in quite a large extent.

I dare to claim from our experience with the public that our morals, credibility and everything else go beyond what we have experienced in public Norway many times. Therefore, it is not really democracy and the "rules" that are the problem, but the people!

Let me briefly mention a few things in from some of the issues we have been involved in.
Read this article at the same time: https://blog.janchristensen.net/2019/05/nr-2463-jevvir-blitt-forulempet-and.html

When I look at all the accusations we have received from the public authorities, the list has been long now. To mention some. Or where we / I have been clinging with the authority due to authorities' abuse of power and obvious misjudgments!

1.) Around 1990, Oslo stormed the police our apartment and penetrated where I stood naked after having showered. My wife opened the door, and they needed a lot of power and cut off my passport, Norwegian. I am both Danish and Norwegian citizen, have dual citizenship. Their claim that I was so-called illegal immigrant was nothing but a lie! The passport was deprived and I would get you back, something I never got. Then the police station at Økern, the one who is today at Stovner, was talking about crook strikes from the police here in Oslo.

2.) In 2004, BV picked up our kids when we were at work, me and my wife. Basic claims and only Devil's company from BV, all claims were lies and exaggerations from beginning to end.

3.) Around 2014, Jan Aage Torp notified me with a fictitious review when he hated me for preaching against remarriage. He aimed to get me 2 years in prison and probably get the most money when he demanded desertic redress. The case itself and the trial were nothing but a goal from the police and the courts to convict me. They managed to lie and deceive. What I was convicted of was neither in the charge nor debated in court, this was a word of justice.

4.) My Father died in January 2013 and by a mistake it was paid a little too much money. This was something our lawyer Harald Hetland would have arranged for. This was not done, and NAV went straight to my employer and took money on behalf of my sister who had not repaid the money. This was nothing but a simple theft of NAV. I won on all points after much writing work. But never a single apology from the authorities even if they stole money that was mine and not someone else's!

5.) We have been ordered to demolish wall, staircase and storage room. Although we have built this among other things. with and received guidance from the municipality on how to build everything. What we have built is very nice, but should be a few cm further out in the road than allowed. Although everyone in a similar situation like us gets a dispensation. The wrong with us is horrible when ia. neighbor has received a dispensation 57 times with regard to the utilization rate of the plot. It is a standard for us and a completely different standard for everyone else. This tells about harassment, bullying and freezing! Bad what the Norwegian state does and nobody reacts. But everything is in spite of this, under God's custody and control.

1.) When the Oslo police stormed our apartment at Vestli as we lived then, they promised that I would get my passport again. First, they should just investigate if they found any errors, which they did not. Even though they had promised me the passport, I didn't get it and had to get a Danish passport. It testifies that dishonesty and lies are something that unfortunately is a recurrence of state, police and the public agency.

2.) When we were deprived of our children while we were working in 2004 after BV had made a completely horrendous and mistaken decision against me and my wife. Then the kids wanted to go home to us, and our son came home. We then brought him to my Father and this did not know police or BV something about. They then panicked when they tried to put the kids up against us, rotten as it was. Then the police officer Jarle Utne-Reitan called that they should only see that everything was fine, and we should have our son. The first thing they did when they came was to break the promise and bring him back to the bad BV. Lie is something that unfortunately is a recurrence in state, police and public agencies.

3.) This whole process of Jan Aage Torp was a lie of lies. He hated me and the heavenly blog when we pointed out his horror that he was remarried where Torp was obviously the one to blame for his own adultery. What did Torp do then? Got the police and the courts against me, which was a narrow case obvious when the Christian hatred brought forth here as it always does! Of course, have a thousand things to mention, but look for more here:
http://justismord.janchristensen.net/

4.) When my Dad died and we got paid a lot of money to be repaid by a misunderstanding I did of course. But then I should not pay back for my sister. This was a rage without equal of NAV and the public as they entered my salary account through the Namsfogde here in Oslo and treated me like a criminal. Even though I had paid back the money they were supposed to have. I won over them at all points and got the money back. They had neither the law nor the right to do such a thing.
5.) The last thing we are currently doing is that PBE here in Oslo, ie the City of Oslo, has ordered to demolish the wall, staircase and storage room. This is not a situation we have chosen ourselves, but which we have come up with due to PBE's handling of the case. Have many examples of how they lie, ravage and manipulate. Includes one of certainly one hundred other examples.

We write this to PBE that others have been granted exemption with regard to masonry, storage room and staircase.

The Planning and Building Agency wishes to shed light on the fact that the issue of placing an illegal wall on the road surface is not a unique situation in Krokstien 2 C. For example, in case 201806484, 201815270, and in illegality case 201717539 in Tamburveien 10, a wall has also been erected. regulated road surface. Nor can this be approved, and will also have to be removed through follow-up in the illegality case.

We answer this:
You compared our property with the one in Tamburveien 10. Here, there is a regular bus service running past our house twice an hour and we have never heard a sound saying that it was a problem. Not a car or anything else. While in Tamburveien 10, it is totally different. They have been pointed out by public authorities. Then we realize that building a "illegal" is a problem. But with us, we really don't understand. Look here for what the Fire and Rescue Services say about the property in the Tamburine Road. 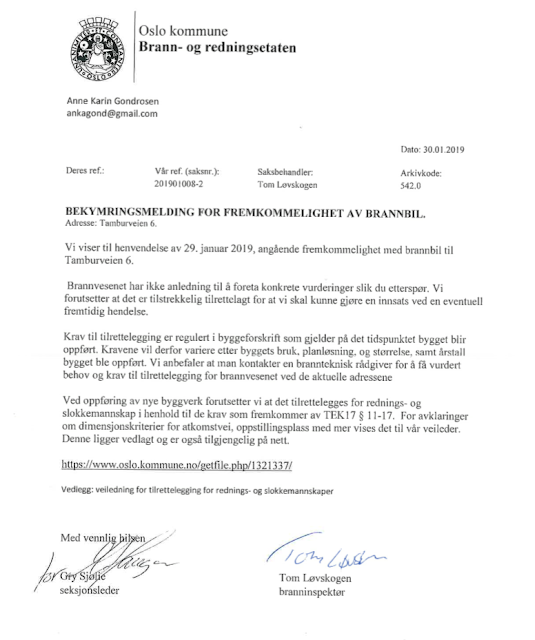 It is also stated about the aforementioned property: "BYM has been on inspection at Tamburveien 10 and notes the following: The support wall is set up 1.0-1.3 meters from the former fence towards the road, which then also means that the wall goes over the property boundary several meters along the road down the corner. The road has become correspondingly narrower and asphalt is cut off and laid inside the wall at the moment. There is no good visibility or space for larger vehicles. ”

With us, everything is the opposite, that they get problems is understandable as there is also poor visibility and they have settled. We have not settled at all, we called down to Kaja Aubert Lange at PBE here in Oslo, and got clear and good guidance. We built as recommended and by guidance, and what we have built is wonderfully good and no one has poor visibility here or anything else since the roadway has become larger and wider since we built our wall. Comparing this as you do in your email is just as incomprehensible to us as anything else you have done and do in this matter! 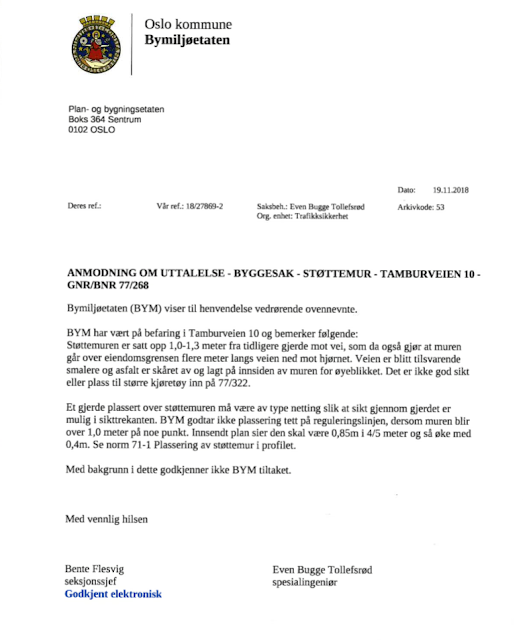 I could have written books on this, but there are some things I've learned here.
To expect to get justice in this world is just to forget. The best thing is to try to put everything behind it and move on with the Lord. It is God in his time to judge these people, not me or anyone else. Judgment belongs to the Lord.

Room. 12. 19 Do not avenge yourselves, my beloved, but give up the wrath. for it is written, "I have vengeance, I will repay," says the Lord.
Lagt inn av Jan Kåre Christensen kl. 11:30