No. 1745: The criticisms against me have been strongly unfair, as I have never pointed out anything other than what the standard and what is required of a Word's preacher in terms of, among other things, that he should not be reprinted as a believer!

No. 1745:
The criticisms against me have been strongly unfair, as I have never pointed out anything other than what the standard and what is required of a Word's preacher in terms of, among other things, that he should not be reprinted as a believer!

Satan and all other Antichristian powers are working on a blast to stop me. Not least, the preaching I have against sin in the congregation, which entrusted preachers, is getting wild. This really loves Satan, above all, that there are people who live according to his will acting in the congregation of God as if they belong to god but are playing with our enemy satan.
Satan has obviously used Hat-Pastor Jan Aage Torp here, in alliance with both the one and the other.
Fortunately he did not succeed, I'm writing as unobstructed as before.
Picture of him who really stands behind all our prosecutions that we receive as believers, Satan. Therefore, one of his names is also opponent or prosecutor.
One of the others gets the lyrics in the GT where Satan's figure is found in the book of Jobs. Here we meet the devil, here called the Prosecutor, among God's counselors. The image is of a royal court with counselors, where the devil has the right to speak. The devil brings the accusation against God that Job's wickedness is false, and only based on self-interest. Satan will then put Job off all he has to see if his faith is true. Here we meet a theme that is continued in the NT, about the devil who can test our faith (Matt. 4, ff, Rev. 2:10).

Later we meet Satan in the role of the one who will destroy the people of God when David is tempted to carry out census (1 Chron. 21) and as accusation against the high priest (Case 3,1.
Torp is a champion of the evil one. 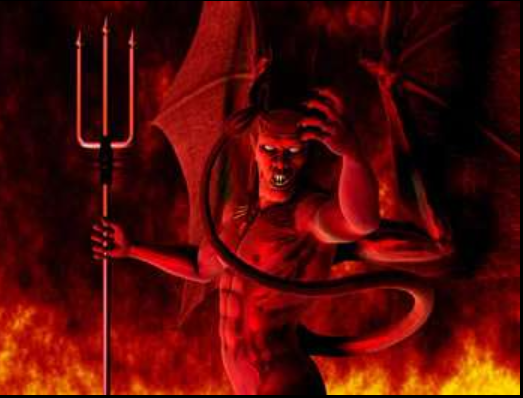 Joh.e. 8. 44 You have the devil of father, and you will make your father's lusts; He was a murderer from the beginning and does not stand in the truth; for truth is not in him. When he speaks falsehood, he speaks of his own, for he is a liar and liar's father.

Genesis 3. 1. But the serpent was more cunning than all the animals in the field that God the Lord had done, and said to the woman, Did God really say, You shall not eat any wood in the garden?

Satan is a liar and keeps us humans in a deception where eternity is omitted from his "glamor image" of this world!

It looks so "extremely" what I have done to warn and proclaim against reproach among preachers. But why this strong resistance? It is because I have touched Satan's bridegroom into the body of Christ, preachers who live and walk in the dark. Who is with this and spreads spiritually married among us believers with their lives in sin as the scriptures say they live in.

I have never proclaimed that "common" people are reprisals. Have never even mentioned believers with names that are remorse, only and exclusively preachers, singers and those who have a supervisory work as the scriptures say. Exclusively, only public publishers and singers who influence others and live a life in public.

When I hear that I'm dealing with harassment, hot and bullying is nothing but Satan's lies as he is a master to.

The entire scripture gives a total testimony to mention and warn against public publishers, this is something that is biblical, healthy and right.

I do not want to warn against society's sweepstakes, what political party to choose or what football team you're going to cheer on. All of this I get a little bit over when I write. But this is not essential. That is what promotes the Kingdom of God and what is in harmony with the GOD'S WORD, NOT ANYTHING LOVE FRIENDS!

Therefore, there are unjustified criticisms we have received and get to a large extent, something like Satan as the liar he is. Is triggering and getting forward!

Here in the newspaper The Day, which tells me that I am against repentents who are my only goal with what I am writing. Not how the common man lives, but how preachers and shepherds in the church of God live and act.

Jan Kåre Christensen took his well-used Bible when he took place yesterday in hall 519 in Oslo district court. The members of the court, the audience and the press in the nodded and crowded courtroom witnessed something as rare as a theological debate about divorce and reunification.

Christensen and his lawyer Brynjar Meling based their entire defense on the fact that the characteristics of the accused have arrived on the web about pastor Jan-Aage Torp, are only religious expressions of opinion. The various words and phrases used were defeated with the reading of the skinned book Christensen brought with him. Bible references flew back and forth between the defender's place and the witness box.

Words like "horkarl" were explained by the religious language the Bible itself uses, or the "Canaan language" as Christensen himself referred to as from the witness box. He stated that the New Testament refers to persons who divorce and marry another than their original spouse, in this way. Therefore, Christensen believes that he has only criticized a well-known and highly-profiled Christian leader for not living in covenant with the Christian faith.

In my opinion, I think, according to their very involuntary experience with pastor Jan-Aage Torp, that the court has been "angled" in its view. I am a private person without any history with Pastor Torp, who suddenly discovered that I was hanged out on his Facebook page in public, claiming that I have committed criminal offenses. The pastor would help the person with this, and he named him as an inspiration for him and his wife.
When I contacted him privately and asked him to support this person privately and fail to involve me, he was so nice, but a month later he had not met my repeated, courteous recommendations to erase the untrue and defamatory claims about me from their sides, where I'm identified.

On the other hand, he wrote a separate blog post about me, where I was made a stalker and insinuated that I had done the same to him as the person he received the court's opposition to.

It's not a true word in this, and when I contacted him again after a month's silence, and kindly asked him to delete my claims, to dementiate what he himself said and to complain, he responded to blocking me.

So much for the persecuted pastor. "Pastor", by the way, means shepherd (shepherd), that is, a guide for those seeking God. I am shocked at how little the courts see who they are doing.

Satan and all other Antichristian powers are working on a blast to stop me. Not least, the preaching I have against sin in the congregation, which entrusted preachers, is getting wild. This really loves Satan, above all, that there are people who live according to his will acting in the congregation of God as if they belong to god but are playing with our enemy satan.
Lagt inn av Jan Kåre Christensen kl. 04:09