No. 1748: Will God "punish" Jan Hanvold, Jan Aage Torp, and others who go directly against the word of God as in the old covenant and which God has done in ancient times? What does the scripture say?

No. 1748:
Will God "punish" Jan Hanvold, Jan Aage Torp, and others who go directly against the word of God as in the old covenant and which God has done in ancient times? What does the scripture say?

Picture of my wife Berit Nyland Christensen, next to the couple Frances and Jimmy Swaggart.
As a young Evangelist Jimmy Swaggart, I think he was sitting in his own radio studio in 1975-76 and God spoke to him that Kathryn Kuhlman would die soon after she had crossed several "streaks" in the spiritual world.
Blue. walked down to the Pope on several occasions, shortly she died too early, only 67 years of trouble with heart. 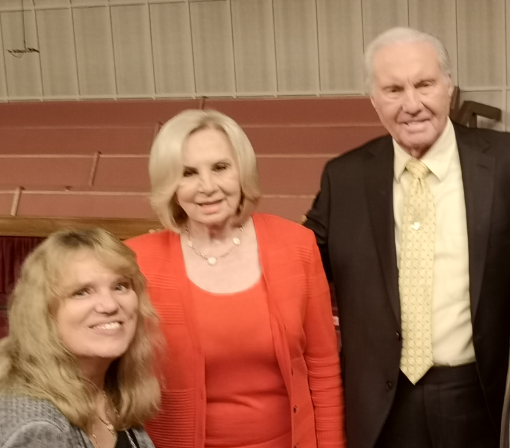 Heb. 12. 25 Make sure you do not reject him who speaks! For let them not go free, those who rejected him who spoke on earth, how much less shall we escape if we turn away from him who speaks from heaven! 26 Then his voice shook the earth; But now he has promised and said: Once again I will shake not only the earth, but also heaven. 27 But the word, Once upon a time, reveals a change of the things that are shaken because they are created, so that the things that are not shaken will continue. 28 Therefore, when we receive a kingdom that cannot be shaken, let us be grateful and thereby serve God for his pleasure, with shame and fear! 29 For our God is a consuming fire.

2 Cor. 3. 4 But we have such trust in God through Christ, 5 not that we ourselves should think of anything as of ourselves, but our divinity is of God, 6 which made us worthy to be servants of one new covenant, not for letter, but for spirit; for the letter kills, but the Spirit is alive. 7 If then the ministry of death, which was cut into letters in letters, appeared in glory, so that the children of Israel could not bear the face of Moses in the sight of his glory, who died, 8 where then shall not the ministry of the Spirit any more be glory! 9 For if the service of condemnation is glory, the ministry of righteousness is far more rich in glory; 10 For this glorious glory has no glory in this piece. 11 For when that which is lost is in glory, much more shall be that which is, being in glory.

God is the same, but the covenant we live in as humans - as believers - is completely different!

God does not look through his fingers with sin, he never did and will never do. Therefore, comparing the old and the new covenant is not wrong. But to believe that God punishes and almost knocks on sin as He did in the Old Covenant. It quickly becomes a sweep theology and learn from it. The fact is that many of the people who live under judgment with their lives are the ones who want and call on others. Therefore, as a believer, pray that Jesus' Son of blood covers every day with grace, goodness, and protection! Or it can actually get us bad!

The New Testament's doctrine is that, above all, as human beings, we must make up and meet God one day, then we will become the style of our lives. Until then, we have to hold on to a very large extent and choose our way. Whether we want to go the way of God or our own ways.

We all have to stand by God one day, and then the accounts will come hour. Until then we get people to a very large extent choose how we want to live, but not always.

Room. 14. 10 But you, why do you judge your brother? or you, why do you disregard your brother? we must all be put before the court of God. 11 For it is written, As I live, saith the Lord, every knee shall bow unto me, and every tongue shall praise God. 12 So then each of us should make God account for himself.

Yes, there are times in the New Testament and the new covenant that God intervenes, warns, reproves, and holds a "judgment" showing that here is the limit!

There are countless examples of this, that God reveals secrets also in the new covenant for His servants. But it is more the exception than the rule.

Amos 3. 7 For the Lord, the God of Israel, doeth nothing, but revealeth his secret counsel unto his servants the prophets.

Let me mention some examples of how the Lord's prophets have revealed the death and judgment of others. As we read about primarily in the GT, but it has occurred in the NT and it also happens in the new covenant.

Evangelist Jimmy Swaggart thinks I sat in his own radio studio in 1975-76 and God spoke to him that Kathryn Kuhlman would die soon after she had crossed several "streaks" in the spiritual world. Blue. gone down to the Pope on several occasions, shortly she died so too soon only I mean 67 years of trouble with heart.

Around 1990 I told my wife that it was a "brother" and false preacher who had destroyed so much in the kingdom of God, that I am convinced that God will remove him with death (the only time I have said such a thing about anyone and that happened). A few days later I read his ad and he died in cancer. Yes, it happens sometimes that God keeps judgment.

We read about Asaph in Salem 73. He had a big problem, it was that those who did not go the Lord's way were "blessed." But they who lived for God, did little. Thus, Asaph experienced it was unfair, and totally opposed to his theology, until God allowed him to see "the hour of settlement".

Salem 73. 16 And I thought to understand this; It was a bother in my eyes 17 - until I entered the sanctuaries of God and watched their end. 18 Yea, in slippery places thou set them; you let them fall, so that they perished. 19 Where they were destroyed in a moment! They went under and ended with horror. 20 As an act of nothing dreamed when one awaked, so you consider, Lord, their shadow image for nothing when you wake up.

When Asaph went in and saw their end, the difference was far from heaven. Before that, it seemed that those who departed from the Lord's way did very well.

God very often allows people to build an "air castle" around them, but this does not. There is only one thing that holds if we have built our life, service, and everything in the word of God. Everything else is high, haml and straw.

There are many examples in the New Testament that also hold a judgment or reveal people. But in the Old Testament, it was far, far stronger and then often also that those who opposed God and His servants had a mortal outcome. While in the new covenant, they were revealed and had the opportunity to repent. This again shows that there is a very big difference between the old and the new covenant.
But anyway, the wages of sin are always the same in both the old and the new covenant, that is death! An eternal and total separation from God where one ends up endlessly in the lake of fire together with Satan, the Antichrist, the false prophet, the fallen angels and the demons.

Room. 6. 23 For the wages of sin is death, but the gift of God is eternal life in Christ Jesus our Lord.

The real truth is that God also lets such false preachers and teachers hold on to God's people being tried if they want to go the way of God or the way of darkness.
When, for example, narreapostel and hat-pastor Jan Aage Torp travels around with his former nanny whom he has now married. And one does not respond to this, so a spiritually completely blind and seduced.
When Jan Hanvold, with all his glory theology and many marriages, runs a television channel and congregation, and one does not respond to this. Then one is not only spiritually nearsighted and has come to a critical point. But one has surely gone over it, then one is actually at a spiritual level like the church in Laodicea.

Joh. Rev.. 3. 17 Because you say, I am rich and have abundance and lack nothing, and you do not know that you are miserable and pitiful and poor and blind and naked;

Here they believed, believed and confessed that the spiritual level was intact. That one was rich, had abundance and lacked nothing.
The truth was the opposite, which, unfortunately, today I have become!
Lagt inn av Jan Kåre Christensen kl. 07:00