No. 659: Billy Graham preaches that it is not necessary to be saved, then salvation is available to all regardless of religion, Jesus warned against false prophets!

Billy Graham preaches that it is not necessary to be saved, then salvation is available to all regardless of religion, Jesus warned against false prophets!

After these sessions with Billy Graham is it obvious to the most positive that Billy Graham is one of the Word preacher who believes that salvation is necessary and required if one is a "good" Muslim, Buddhist, etc. 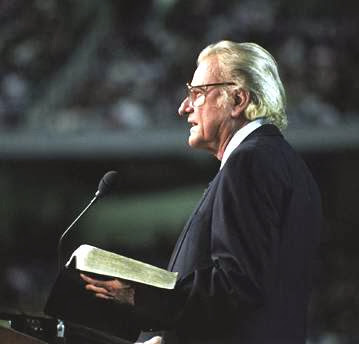 Billy Graham on the "Hour of Power" show saying that people can get to Heaven another way besides through hearing the Gospel of Jesus Christ and then repenting and believing the Gospel. He basically says that "good" and "sincere" people who know nothing about Christ are on their way to Heaven. I know that the audio and video are a little bit off, but this really did happen. For those of you who don't believe me, check out some of these sites as well: Transcript from this show: http://www.ondoctrine.com/10grahab.htm And here is the content of the transcript: Dr. Schuller: "Tell me, what is the future of Christianity?" Dr. Graham: "Well, Christianity and being a true believer, you know, I think there's the body of Christ which comes from all the Christian groups around the world, or outside the Christian groups. I think that everybody that loves Christ or knows Christ, whether they're conscious of it or not, they're members of the body of Christ. And I don't think that we're going to see a great sweeping revival that will turn the whole world to Christ at any time. What God is doing today is calling people out of the world for His name. Whether they come from the Muslim world, or the Buddhist world, or the Christian world, or the non-believing world, they are members of the body of Christ because they've been called by God. They may not even know the name of Jesus, but they know in their hearts they need something that they don't have and they turn to the only light they have and I think they're saved and they're going to be with us in heaven." Dr. Schuller: "What I hear you saying is that it's possible for Jesus Christ to come into a human heart and soul and life even if they've been born in darkness and have never had exposure to the Bible. Is that a correct interpretation of what you're saying?" Dr. Graham: "Yes it is because I believe that. I've met people in various parts of the world in tribal situations that they have never seen a Bible or heard about a Bible, have never heard of Jesus but they've believed in their hearts that there is a God and they tried to live a life that was quite apart from the surrounding community in which they lived." Dr. Schuller: "This is fantastic. I'm so thrilled to hear you say that. There's a wideness in God's mercy. Dr. Graham: There is. There definitely is." The conversation above occurred between Billy Graham and Robert Schuller, who is the pastor of the Crystal Cathedral in Garden Grove, California and founder of the Hour Of Power television program. The interview was broadcast on May 31, 1997 on the Hour of Power television program, titled "Say 'Yes' To Possibility Thinking," program #1426. Also check out this: Go to page 6 of this newsweek article to find out: http://www.newsweek.com/id/46365/page/6 The part of this article that I am talking about starts at the second paragraph. The article/interview is titled, "Pilgrim's Progress". Think about it friends, if what Billy said was true...that one can get to Heaven another way besides through Christ, then there was no reason for Christ to shed His precious blood. But, the reason He did was because He knew there would be no other way. Read John 14:6, Acts 20:28, Romans 3:21-26 & 5:9, Ephesians 1:7 & 2:13, Colossians 1:20, Hebrews 9:12 & 9:22, etc. Also, check out these other videos concerning Billy Graham on YouTube: http://www.youtube.com/watch?v=Sow0gf... - This provides a better version of what you have seen here at about 4:00 min into the video http://www.youtube.com/watch?v=ozjLao... - On Larry King Live http://www.youtube.com/watch?v=mC2WPR... - John MacArthur talking about Billy Graham's stance. I just want to end by saying this: I AM NOT questioning Billy's salvation (although it may be in question) or trying to malign his character in any way. I am just presenting the truth, the facts so people can know for themselves. This way people can call Billy to repentance and pray for him. God Bless...