Image of Earth, seen from outside, the earth is like a microbe in the universe. 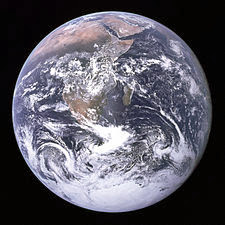 KR 31 .07.13 1 Misleading about eternity ? Thanks to A . S . for response p to my articles about terms forever and ever. A 4 5 page study terms is on www.oppsiden.net . A . S . says "Both life and punishment that Jesus gives is without end, so a straightforward reading of Matt 25:46 dictates. " This " forthright " l swell I practiced, up problems accumulated when the entirety was investigated . I added inconsistent r s When I time indication ig says that "aion only be translated with age" and ends up that "Forever and ever" must understood as "the last age " . G jennomført concordant translations are But has its weaknesses . The importance lies " age " close "Aion". The translation of idiom "Eternity" is another matter. "In every age" is more correct than "forever". "T il last age "Covers idiom meaning . It follow r of the Bible says that h in m m e l o g j o r d shall consist of eternity, yet pass away. And a t Christ will reign forever (Heb. 1:8), but also surrender the kingdom God in the end, when God becomes all in all (1 Corinthians 3:24 p.m. f). Inconsistency t in l h ø r e r d e m s o m flows r that "in all eternity "means without end, m e n s o m l in k e v e l faith r a new heaven and earth. S itate from Bible Study on the gr boxed expression for " forever and ever " well-known . At this presented as the strong ste expression of infinity , there is no problem But - What means eternity? If aion alone involves " infinite temporal extent " , Why when talking about uendeligheters infinity? And how can one when use aion time and age ("age" era), or the world? Translations and theology maintains misunderstanding r Is visible for example. in Tit 1:2 Where Greek has "BEFORE ( pro ) Eternal " While NB88 has "FROM forever named by ". BEFORE eternity go not an, so therefore FROM . V in are trained that the Bible uses olam / ai on both of bygone and future infinity . But NT and GT I have not found exception f ra rule: Because lyrics (Interlinear) user olam / aion Exclusion those of ages between creation and new creation of the world. I requested to explain terms like "Him (Christ) be glory for ever and ever", if "Forever" understood as "the last age" ( or "all ages" ) . We find similar problem in Commission: "I am with you always, to the (aion - of the age) end. " Not anymore? Of course, but it is now that we need everlasting consolation (2Tess 2:16) - persistent, unfailing comfort and a good hope, UNTIL we're home. Then we wave all this farewell, for the hope that is seen is no hope (Romans 8:24). Christ be honored through the ages That in the new creation. But the latter is not problems , for when God is all in all. Scriptural message is that God will prevail in this E WORLD, and through the ages, through Christ. Therefore, we ask "Thy will be done, as in heaven, so on earth." The eternity we await the coming era, when God raises his kingdom on earth, and all the saved occurs to immortality. This is l angel before the end, before the new heaven and earth. It was this age Jesus was talking about When he spoke of eternal life in the world (aion ! ), Mark 10:30. Rev. 1:18, that Christ was dead, but is alive forevermore , Not So e to the statement that Christ d e r e t t e r has infinite existence. He had before his death. But he shall not die more, but rule until KR 31 .07.13 2 End, where death destroyed, the last enemy. God is from everlasting to everlasting, but mainly is also Israel should stay in l andet from everlasting to everlasting hot (Jer. 7:7) . How it if eternity are before and for the two creations? I do not introduce different understanding of the eternal "life eternal" and "everlasting punishment" . In both cases describes a character that goes beyond the present . But we can not stop that eternal ang ir uendelighe t f ordinary d e t o g s to s t to r t in l n o e s o m e t t e r s in n n a t u r e r u o p p h ø r l in g , s o m in u t t r y k k e t "The e vige God " . How should we when could explain terms like "The eternal mountains were shattered" Hab 3:6? God is pr. def. the one always was, is and will be. Eternal describes his being, as in Isaiah 40:28. Eternal life sealed es with immortality, eternal punishment end in this world.

1 Still misleading about eternity? Take kk to A . S . for Posts , 16.08 . I know well the arguments of relative and absolute importance of forever, from Bible Study. I have tried to apply it, but found that the in fact introduces two meanings of eternal : Absolute eternal = infinite, and relatively eternal = finite. Finite and infinite can not covered by one word , forever. A. S. comparing the use of forever with solid. When Jesus says Mark 10:17 that b are is God who is good, then it is because people are Evil , as he says in Matt 7:11 M. M. It is KKE certainly well , against relatively well, but good versus evil. When Barnabas pulled in, we must not forget that He was born and v ar "a good man, and full of the Holy Spirit and of faith" , Acts 11:24. Was he thus relatively good ? It which was Barnabas by the Holy Spirit was just absolutely well as God himself, although Barnabas was a man also with flesh. Comparison of spores. S tudiebibelen sie r that material things have ever seen relatively, ie as fina g, we what have with God to do Must forever be perceived absolute, ie as infinity. Then it just said that finally is finite and the infinite is infinite . So what then of eternal life? How do we about forever life must be considered absolute , without end? Can we read it out forever life? No , we must find answers in context one or other places. We read cycle. that we are immortal resurrection. Eternal life is perceived when absolute , that life without end. What so with eternal punishment , M To also perceived absolute? We read that Satan will tormented day o g night in all ever, Revelation 8:10 p.m.. A main point of what I have said in ten dligere posts is , that this does not describe punishment without end. There are many reasons for this , Bl . a: The basic text in Titus 1:2 etc. show that " infinity "Aion, not denotes the time before creation , but the ages for. Likewise, neither aion denote time after the new heaven and earth, because: past ages (Aion) has come to us, 1Cor 10:11, and Christ is revealed by the ages end, Hebrews 9:26. And, Israel is given the land for ever ever, Jer 7:7, ie that "infinity" is located within the confines of this world. And, Son throne is for ever, Heb 1:8, but cessation Nevertheless, in the end, 1Cor 3:24 p.m. f to o gså Dan 6:27 says that "his lordship lasts until the end " . And, The earth shall not be moved for ever? Psalm 104:5, but will still pass away, and replaced with a new . There are thus many statements that all must implicate that the term "forever" must be understood in n for frame of this world , as all ages until the end. Taking j I error here I am left with arguments as not e s worth the ink in the day. If not, must eternal punishment TLC ear in the end, ie perceived relative t , and opposite of what we found for eternal life; and we ended up in a situation that "is so unreasonable that it knap t need to be challenged " , says Study the Bible. Either we must nevertheless accept the absolute and relative importance side by side in the same verse, or detect errors in understanding ove r . Or do like me: discard relative - absolute - argument . In covenant with grunnbetydnin tion of olam (forever in GT) realize r I that eternal not describe infinity, but border nature of the content and pass the unit outside the temporal constraints . Eternal life is a character of life by the pleasing , sealed together with immortality and This Life (True, 1 Timothy 6:19) persist without end. Eternal punishment is a grade of punishment ceases to End , when God will. An vs. Revelation 1:18 (I was dead .. but live grace forever) I rendered inaccurate . I say "he will not die more, but the rule until End. . ". It is here a cure r ant expression of both living and rule, in all 2 infinity . I do not see antics , that "to live" in reality is replaced . And f ortsatt is mission - command comparability r with the situation in Rev. 1:18. Jesus was dead, but alive forevermore, not only to exist, but exert a most important role as regent, together with their servants (Rev. 22:5) Until E Spirit. On equivalent way he us now until the end of the age and in both cases the he still be with us when they nn e world battle is over.