No. 664: Specialization and explanation why I consider Benny Hinn , Jan Hanvold and other Pentecostal Charismatics as dangerous for you as they really are magicians , psychics and false prophets!

Specialization and explanation why I consider Benny Hinn , Jan Hanvold and other Pentecostal Charismatics as dangerous for you as they really are magicians , psychics and false prophets!

Unfortunately it is far from anyone who uses the name of Jesus which has good , noble and right intentions. But this is nothing new or that we are warned against in Scripture . I think more and more that really so have not these people ever been saved and born again. They are like the apostle John says :

1 Jn . b 2 18 My child ! it is the last time : and as ye have heard that antichrist is coming, so it is and now many antichrists , whereby we know that it is the last hour. 19 They went out from us , but they were not of us : for if they had been of us , they would have continued with us : but it should be obvious that not all of us . 20 And ye have an unction from the Holy One, and know all .

We live in the last few days , they have gone out from us says the apostle . They move among the Christians , but they have never been Christians and true born-again child of God , where it is obvious that Jan Hanvold , Benny Hinn , Todd Bentley , and very many other Pentecostal charismatics . Had they had complied with God's word and biblical and healthy church discipline , they had never had a nubbesjanse to deceive and mislead so many people. Photo of Todd Bentley who is remarried as Jan Hanvold and so many other Pentecostal Charismatics are. 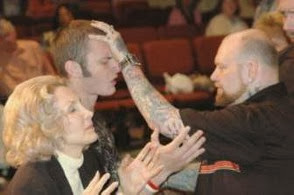 Notice that Jesus says about those that he has never known them :

Notice verse 23: "And then I will declare to them, ' You have never known me. Depart from me , you who are doing lawlessness . "

These people like Benny Hinn , Emanuel Minos , Jim Bakker , Jan Hanvold and countless other Pentecostal Charismatics , they have no conscience intact .

1 Tim . 1 18 This charge I commit unto thee , son Timothy , according to the earlier prophetic words of thee , that thou by them will fight the good fight , 19 as you have faith and a good conscience , it has some cast away and suffered shipwreck in the faith ; 20 Among these are Hymenaeus and Alexander , whom I have delivered unto Satan , that they may be chastised for not to blaspheme .

They threw away their conscience , therefore , " are transferred " their spirit to others if one opens up for the same demonic and evil influences.

King Saul was never circumcised heart - although he came under prophesied.

Emanuel Minos , David Ostby , Jan Hanvold , Benny Hinn , Todd Bentley and all other Pentecostal Charismatics are like King Saul . They know both the one and the other, but Jesus knows they do not even Jesus does not know them!

It is obvious that this is so, then the demons can not stay in the heart of a true child of God. Whether " live " Satan or God there. It is obvious that when having people who are true children of God, but is that the religious time of Jesus , Satan's child and have him Father .

Joh 8:44 Ye are of your father the devil , and you want to do your father's desires he was a murderer from the beginning, and abode not in the truth, because truth is not in him . When he speaketh a lie, he speaketh of his own: for he is a liar and the father of lies .

After studying this subject, and the word of God again , so I have come more and more to the conclusion that these deceivers , sorcerers and false prophet have never been saved and has always belonged to the evil as he is their father .