No. 676: Pastor David Yonggi Cho has been exposed as a crook , thief and manipulator . When the supreme leader 's that have to be like sheep shepherd and leader in a greater or less degree!?

Pastor David Yonggi Cho has been exposed as a crook , thief and manipulator . When the supreme leader 's that have to be like sheep shepherd and leader in a greater or less degree!?

The first invited Cho Norway is the now deceased false prophet Aril Edvardsen . It is so sad after this revelation is that those who have allowed themselves willingly deceive and mislead is not helped by this disclosure. It's just an excuse and everything else that there is nothing wrong either with them or Cho . The old man will always let themselves be deceived and be misled. When Aril Edvardsen died , he was Executive Board Member of Church Growth International and chairman Dr. David Yonggi Cho . These two false prophets were good friends and had the same spirit of apostasy and preaching. When he was in Farsund his name was Paul Yonggi Cho, but changed his name to David Yonggi Cho . The man is crazy sure , too, that's why he served these lies both before and after he was exposed , imagine believing that he was tricked by his son who was a crook. He " proud " he . Any sensible person would never rely on the family black sheep as they call him now , right? It serves the lies on a conveyor belt , there are so many gullible and deceived Christians of this "can" they . The Apostle Peter says they are trained for this.

Photo of the false prophet Aril Edvardsen who invited Cho first to Norway , which has been as a catalyst for all this false and seductive we see among today's Pentecostal Charismatic Christians. 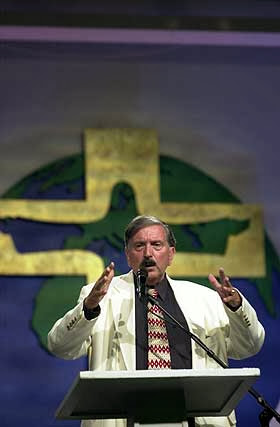 It is inconceivable now that various Pentecostal Charismatics taken Cho in defense .

It is said that Cho was cheated etc. But this is really the second rear light . He was not at all wise , he is a cheat , crook and thief. His son was the same cloth . Signs for the fourth time and many extra- marital affairs and other Crimea. One does not get fooled by such a person even if it is your own son , how stupid and naive can one be? Obviously this is a smokescreen for their own deception and lies.

Anyone who defends Cho did not realize that they are defending a crook and a false prophet.

Cho has taught and preached unbiblical in all the years he has held on . But his glory theology or progress theology , false revelation , false prophecies, visualization , dreams and I do not know what. And this he has hidden behind his request and have a great church , but all this is and remains a mega deception and a mega seduction.

Aril Edvardsen who invited Cho first to Norway was also a mega liar and crook.

I've been on four summer events in Farsund . From 1982 to 1985. through the four years I heard utålige prophecies. Among other another day of Nordic countries in that almost all of Scandinavia might be saved etc. The fact is that of all the prophecies I heard both there and by and large it all through thirty years among Pentecostals and charismatics so hardly a single prophecy held true !

What is this? We read about this " revival " in Paul 's letters :

2 Thess. 2 7 For the mystery of iniquity doth already work: only he who now holds again, cleared the way ; 8 And then shall that Wicked be revealed , whom the Lord shall consume with the breath of his mouth and bring to naught by the manifestation of his coming. 9 And his coming is after the working of Satan with all power and false signs and wonders , 10 and with all the deception of wickedness for those who perish, because they received not the love of the truth , that they might be saved. 11 And therefore God shall send them strong delusion , that they should believe a lie: 12 That they all might be damned who believed not the truth, but had pleasure in unrighteousness .

This is the third article I write about Cho . And I could have written much, much more. But will stop here . Just want to say that there is a part that says we should not go against these men of God . Firstly , these are not men of God , and if there are men of God or not, everything will be tested on the word of God by what we preach , teach and how we live. Here are some that neither preaching or living right , then they are false prophets God's word learn!