Nr. 264:
SV frays - it is a prayer response or coincidence?
Is it the end for the SV? I hope and believe it 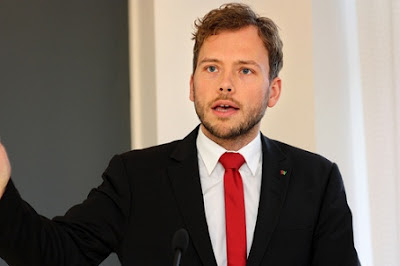 John. e 3 27 John answered and said, A man can receive nothing unless it is given him from heaven. Matt. 10. 29 Are not two sparrows for a penny? And not one of them falls to the ground without your Father. John. AD 16 23 And in that day shall not ask me anything. Verily, verily I say unto you, All that you ask the Father, he shall give you in my name. 24 Hitinntil you have not asked for anything in my name; bed, and ye shall receive, that your joy may be complete!
Here an excerpt from his party SV program. But as often in the statements, they are much worse in their party program. Here, their hatred and opposition against Jews and Israel, they are anti-Semites: "SV supports the Palestinian struggle against Israeli occupation and påtvungent exile, their right to an independent state with East Jerusalem as its capital and the refugees right to return. SV will put pressure on Israel and be a driving force in the struggle against apartheid wall in the occupied West Bank, according to the opinion of the International Court in The Hague. Israel must negotiate with the Palestinians' elected representatives, regardless of party. Lack of international pressure on Israel is a major reason why Israel can continue the occupation. SV will work for international sanctions against Israel, and thinks it must be considered both economic sanctions and penalties in culture, sport and academia. It is essential that they have support among Palestinians. SV will work for an international arms embargo and arms embargo against Israel as long as the government continues its attacks on the Palestinian civilian population. "
Here, their relationship to marriage which actually gay and lesbians are to be preferred to heterosexuals, "SV will work for greater acceptance of lesbians, gays, bisexuals and transgender people in ethnic minority communities and religious communities, including through awareness-raising activities. The fight against forced marriage must also include lesbians and gays who are forced into heterosexual marriages. SV says Norway must play a leading role in international efforts to ensure the rights and better living conditions for lesbians, gays, bisexuals and transgender people. "
Their relationship to the state church in Norway, which basically is good, but then they really are rebels against God, so do everything then, "the state church are created in a different political time than ours. It is a true child of enevoldstiden, and took no account of a society founded on democracy and representative government. Today's amendments to the Constitution means that the references to the Norwegian Church as the state religion in the constitution will be removed after a process of democratization of the church. All religious and belief communities should be supported on an equal footing. "
SV has of course its good sides, but we see time and again that they are talking about an equal and inclusive society. But managing more and more against a totalitarian society and pyramid with SV and the Socialists in the lead. We see that the SV has a terrible Israel policy, and for gay and lesbians as bad as they are living in sin is against God's order of creation. But their relationship with the Norwegian state church is healthy when the DNS for too long has had special rights that are terrible. There is actually working against us KRF Free Church, and no comment on it, it's a disaster!
SV support to other
Now SV problems that they have supported a number of other organizations like the Treasury was their own party case, it is deeply tragic and the Norwegian law. But those who get the most money from the socialists in Norway, there are Palestinian Arabs in the West Bank and Gaza stripper, up to about 1 billion a year for sure. They make money without the Socialists may submit a single document on what the money goes to, it's horrible and direct undemocratic. That it is possible. But here no one cares about this, but there are some Israeli friends that give some money voluntarily to some of Israel, then screams SV and all other socialists to. I look forward to 1000 year kingdom as justice, truth and goodness will prevail and it is certainly Socialists and the Socialist Party `s time passed, God be praised!
SV is about to dissolve, it is an answer to my prayer?
I know that many believers have both desired and there are even those who have requested that this party has to go doll, this is happening now God's judgment? I dare not say, but I know that God has the full control. And nothing happens without his will. Therefore it seems that their resistance against Christian values ​​and the state of Israel is about to be "crowned" with that they are experiencing so much trouble and difficulty. I think the SV also has its good sides in the first place. But when the battle is being so great, be against Israel and Christian values. This is and will always be a matter of time before they go under. It has gone and will go with all the parties and all others who oppose the Jewish-Christian heritage: From Wikipedia: Jewish-Christian (in British English, Judeo-Christian) is used in the United States since the 1940s to refer to standards of ethics are common with Judaism and Christianity. The term is also used in a historical sense to refer to the relationship between the precursor to Christianity and Judaism (end of quote).
Related links: http://the-heavenly-blog.janchristensen.net/2012/03/nr-261-jew-hatred-is-strong-excerpts.html http://the-heavenly-blog.janchristensen.net/2012/02/nr-255-audun-lysbakken-socialist-shows.html
Lagt inn av Jan Kåre Christensen kl. 01:34