Nr. 270: Church Fathers is not the solution, but always the word of God!

Church Fathers is not the solution, but always the word of God!

Ulf Ekman is a false apostle and prophet, we must warn against so strong we can be leaders when he lost the sheep (Acts 20 29 I know that after my departure shall grievous wolves come in among you, not sparing the flock , 30 even among your own selves shall men seem perverse speech that leads to entice the disciples after him) 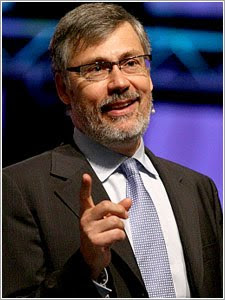 Very briefly I will tell you what a French pastor saw a few years ago. It all started when a book was published by Saint-Paul (Paris-Fribourg). The book was a new edition of the publication "Mary delights", written by no less than the Italian theologian Alfonso de Ligouri, who died in 1787 and was later declared a saint by the Pope. He was exalted to hold the title of Church teaching. Archbishop of Lyon put the Church's "imprimatur" (release permission) on the book. This so-called "imprimatur" is a guarantee that the book's content, both moral and doctrinal, approved by the Catholic Church.

During the reading of the book pastor discovered that the content was actually somewhat profane and blasphemous in relation to biblical faith and relationship with the Lord Jesus Christ himself. First he was shocked by statements such as this: "You can pray to God for many things without getting answers. If you ask a lot of Maria you get answers to prayer. "Or the following:" To pray with Mary is like trying to fly without wings. "But the height of abomination thought the pastor was reached when the following text appeared:" Brother Leon saw a second day increases, a red that Jesus was on and a white, where Maria was. He saw that the souls who tried to walk up the red ladder was able to walk a few steps, but then fell back. They tried again, but always fell back. When they were advised to try the white ladder, and then went steadily up, because Maria kept them in hand, so they happily reached paradise. " Now the pastor had enough. No Christian can well agree with this abomination, he thought. He therefore wrote a letter to Cardinal Ratzinger (the current pope), who was then prefect of the Congregation of doctrine in the Vatican, and asked him if he does that faith could accept such heretical claims. The cardinal replied through his secretary: "Mr. Pastor. Your letter has come to His Highness Cardinal Ratzinger, asking me to confirm this. The cardinal has not had the opportunity to read the book that the quote and therefore can not answer your questions. He suggests that you consult with the Archbishop of Lyon, who have given permission for publishing this book to publishing Saint-Paul. "

Said and done. The pastor wrote to the archbishop. The answer came on the first day: "Mr. Pastor, I can understand that you are shocked. However, all texts must be understood in its cultural and historical context. Alphonse de Ligouri is a pioneer and only a witness. His life was exemplary. Happy New Year. " Finally, the pastor wondered: "What can one think about the response from Cardinal Ratzinger? Is not it a bit rough to say that he did not know Ligouris fonts? This is the moral theologians patron and was recently quoted by the Pope! When it comes to the Archbishop of Lyon, one should probably be able to expect a better response from such a high Catholic leader. His answer was really disappointing. Actually, there's only one thing I asked about. It was about both of these Catholic leaders agreed Ligouris learn. Since I did not get a clear answer, I must conclude with the famous proverb: "He who is silent, consents." Everything the apostolic fathers, church fathers and theologians have written centuries races belong to the ecclesiastical tradition, which contains rich values ​​and dangerous side tracks. Some religious writers considered to have made particularly important contributions to the Catholic Church's tradition. To those listening Alphonse de Ligouri. We have now seen some of what he was capable of writing.

Some theologians of the Protestant family regret today that the Reformation created a contradiction between Scripture and tradition. But how do we avoid being confronted with this contradiction. It's just there as an unshakable fact, that no pious or clever phrases to explain away. Therefore, it is clear that the only "Scripture alone" gives us solid ground under your feet, and it says Jesus himself: "I am the way, the truth and the life. No one comes to the Father except through Me. "

We will begin this article with a quote from the magazine "Keryx", which shows the romantic interest of the Fathers in some Christian leaders today.

"Fathers of the Church has taken a big step right into the Christian consciousness and is now quoted without the hassles of Free Church people, who previously barely knew they existed." (Benjamin Ekman) "Pentecostals taught me to love the Bible. But it was the Fathers who helped me to understand it. Can you understand the Bible without listening to those who were its first readers? If we promoted the biblical texts from the soil where it grew up and got his food, then our view of the Bible's teachings spread out in all directions. "(Peter Halldorf) "What we currently have not always realized, is the danger of underestimating the historic church in whose Hegn Scripture emerged." (Ulf Ekman)

Some remarks to the romantic interest of the Fathers

The first quote is a joy that the church fathers are coming in. Also among the Free Church, which previously did not even know they existed. His wont portray "Keryx" this time also Free Church people bigoted and ignorant. Usøkt I came to think of a visit which I made in a free church pastor. While I admired his huge collection of books, I discovered the whole range of patristic writings in English. Since I knew the pastor well enough, I knew he probably had read most of them. Everyone has surely not studied this subject as thoroughly, but that the Christians in the public and the Free Church in particular would be so totally ignorant of the Fathers, I think is an exaggeration. The fact that evangelical Christians are not known to quote the church fathers at all hours, it is only natural. It is the preaching of the Bible's message, which is the primary in all revival preaching. Since it is really just a remark should be done. These writers speak out just as the Catholic or Orthodox apologists. This is puzzling, because strangely enough, officially belong in evangelical circles. This gives rise to many questions. But we must also put the spotlight on the nature of their propaganda for the Church Fathers.

Peter Halldorf says it was the Fathers who helped him to understand the Bible and ask: Can you understand it without listening to those who read it first? A curious question. Bible's first part, the Old Testament books, of course, had had many readers long before the patristic. But these fathers spoke of was not the first to read the New Testament apostolic writings. They first read the letters of the apostles were naturally Christians in those churches that letters were sent. The first addressees were also the first readers. Fathers of the Church influenced primarily what we call "early church" (the first three centuries), but also later appear theologians who called the church fathers. The big question is: Is the Christian people's understanding of the Bible depends on how the purely temporal is in relation to the apostles? Does not the whole Christian history that it has always existed theologians, preachers, missionaries, and ordinary believers who have had great light of Scripture? Can not the Holy Spirit give us today the same insight that he gave both the first church and many of the Fathers? Jesus' promise that "the Spirit of truth will guide you into all truth" is certainly the children of God in all times. (See John 16:13)

Mr. Lennartsson theologian writes, "Fathers of the Church left behind not a unified Christian view. Which one should we follow? "We must, in other words, do not romanticize the Fathers, even though many of them were real men of God. Some of them introduced namely the apparent deviation from the apostles' doctrine.

Danish version of 1 Thessalonians 5.21 says: "Consider it all. Hold fast to that which is good. "This also applies to the Church Fathers statements. God's church are the apostles and prophets the foundation, not the church fathers. (Ephesians 2:20)

Ulf Ekman warns against underestimating the historic church in whose Hegn Scripture grew. We can agree, if the term "historic church" refers to the apostolic church and not to the Roman national church, which later became Pope Church. The first Christians were in fact not Roman Catholics.