Olav Tveit, together with the Pope as a false prophet when he says he is Jesus representative on earth, thus making himself equal with Jesus, some of which no person is allowed and can do! 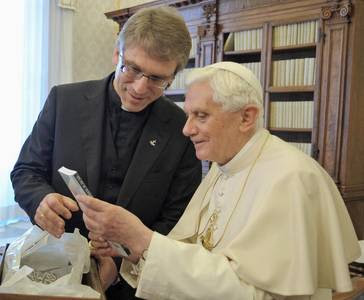 "SOUND, SEALED and Delivered"? Was the name of an old hit song that came to my mind the last day - related to the condition in general in today's official Christianity - in the Western world in general. Do we have "an established mind" (sound mind). Are we tested, tested and weighed and stamped with the seal "approved"? (The trial of your faith is precious to God). (Sealed). And we are "delivered" from carnal desires, ambitions and sensual "sentimentalism" under the name "Christian"? I answer that Scripture says in 2 Kor.13, 5, "Examine yourselves, whether you are in the faith! Try yourself! Or know you not in yourselves, that Jesus Christ is in you? It may be that you do not pass the test. "

I've been burned before with a couple of questions related to the title here, which I now come with: Is it no longer Christ who is the head of the church? (Efes.1; 22 and Koloss.1, 17-18). And is it not written that we are head and no tail in the chapter about the blessing and the curse (5th Mos.28; 13) if we hear and do His will. In this context, that we - relating to the enemies of God, they live as Satan as well known is the tail according to Matt.16: 23 and 4; 10 Christ is still the only head of their own. Is it now so that Gal.3; 3 1b that "... you started in the Spirit, are ye now made perfect by the flesh?". ? As for umbrellas: How and why then has an overall Pentecostal movement "in Norway could join in and go under the umbrella organization called the World Council of Churches? Along with "The Christian Council"? For the facts are as follows: Now a Norwegian leader there, Olav Tveit. Saying it is good and morally reprehensible with gays cohabitation. On the contrary, he says. He also says he is open to homosexual cohabitants in dedicated positions. In addition, they are clear about their cases in the PRO-Palestinian and anti-Israel. Jesus says in Matt.7; 21 that "not everyone who says Lord, Lord, for he will enter the kingdom of heaven, but whoever does the will of my Father." And in Luke 10: 16 He says that "those who hear you , hear me. " What are the voices we hear today? For this "voice" from the WCC does not match the words of Jesus (voice). Jesus said My sheep hear my voice. (Joh.10; 27)! Hvofor, the Norwegian Pentecostal movement entered under an umbrella that represents HEADS who has made clear anti-Semitic, anti-Israeli attitudes and moral concepts that both contradicts Scripture? Therefore it is also written to the believer, if skjøgekirken (on good modern Norwegian: whore church): "GO OUT OF HER, MY PEOPLE that you will not have a part in her sins, and lest you share in her plagues ". (Revelation 18.4). Wherefore, I surprised myself Pentecostal people signing up under such an umbrella and thus also their community with their many other "HEADS". The WCC is "Pentecostal World Fellowship" member.

And not least: www.oikoumene.org / en / resources / documents / central-committe .. where it says in the 4th section that .. "we all be one, - such as churches - and to make one humanity in God's one creation, and pursue these goals as a unified organization." (Freely translated from English into Norwegian by me). I personally can not see anything but that this is a misuse of Jesus' prayer in high priestess Joh.17, especially verses 20-22 when Jesus speaks here about both his disciples and of those of them come to believe in him and that the unit here is His body is invisible and certainly not consist in external organizational ties. It is and remains Spirit. Se.Joh. 3, 6-8. For that which is born of flesh is flesh and that which is born of the Spirit is Spirit. The Holy Spirit who blows where it will, as you hear the whistle but do not know where it comes from or goeth. .. I wonder why Pentecostal "movement" in Norway is in need of such an umbrella? For here is impressionable souls indirectly seduced the moment they sign up into some of these communities that are part of the world council. As to question # 2 that is me in the heart - namely, all the divorce, and other immorality among Christian believers today. . Among other because it is written so much about it. Let me first of all say that for me it is the Word (Scripture) and the Spirit is life with a large L. ALL have trials and temptations. ALL. And God's Word has the answers. At ALL. Personally, I take the Word seriously when it says that "I will not reveal some of my closest nudity." (Including the 3.Mos.18) and is therefore basically disagree in public do other believers 'sins'. Yet still, when they are in management positions as well as the shepherds of the Lord's church - they are responsible before God on their behalf and should therefore be transparent. And be holy, pure vessel to an example to others and to honor the Lord. It is then not get them. My thoughts go unto salvation, and for it to be in trials and victories. (Åp.2; 17.26 and 3, 21). For God tempts no one, and he says he has made both the trial and the way out so that we can withstand it. (James 1, 12-16.). I must say with regret that many of these have made that Esau and sold his birthright for a "soup bowl" ... (1.Mos.25, 29-34). In the current context is the same principle, namely that they have given in to their lusts and desires of Esau rather than to do as Joseph, namely to run out of his cloak with the words "Far be it from me to sin against the Lord" ( check also Heb. 12, 4) when the Pharaoh's wife would threaten him to sleep with him. (1.Mos.39, 12). We are all weak earthen vessels. Sinners saved by Grace. But grace and truth have to "kiss" and we have received the Holy Spirit to be able to resist if only we seek the Lord for help and guidance. There are also patient safety lessons to learn in a Christian life and doctrine. In the midst of this, however, help to get when we confess our sins to Him, possibly before God and man. He is faithful and just and will forgive us.! . (1.Joh.1, 9-10). This was longer than I had planned but it is a cause .. So let me conclude by saying that what is said is always grace and restoration in Christ Jesus for a repentant sinner! But it is not right to "sin of grace", that is, to sin knowingly! For there IS a difference between "stumbling over something" and to act deliberately. And I can not understand other than it is something you do deliberately when you get married several times even though they know the Scriptures and is illuminated, and even to teach others. Then you can not possibly be "unconscious moment in deed." But when in such a setting, defending their practices and continue as if nothing would have happened, I have il to refer to a few passages with a request to the browser to turn them up. : Jak.1; 10 Hebr.10; 26-27 and 1.Kor.5; 11 and Åp.20; 7-8.

If I am by writing this could have helped open the eyes of a single heart - so it is worth every letter! For "This I say that no one deceive you with alluring voice." (Koloss.1, 4). Biblical faith:. Jesus said that His Word will judge us on the last day. (Joh.12, 48).