Of all my opponents I've met, Pastor Jan Aage Torp probably stands out as the dirtiest and most dishonest I've ever met.
First he invites me to the cafe, right afterwards he notifies me.
Especially worse and hypocritical is it not possible to be?
Yes, Pastor Jan Aage Torp is the sneakiest, ugliest and most malicious of all my opponents.
Who has just been looking to make nausea and trouble for me and my family. It has been a dirty game, but I have figured no one will ever be able to get me out of the box. As I and my family have God's Word and God's promises that we should stand after defeating and overcoming everyone! 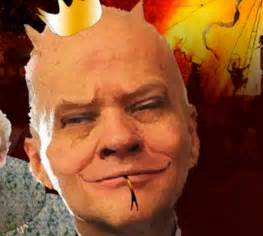 Psalm 120. 1. A song during the party journeys. / To the Lord I cried in my distress, and he answered me. 2 Lord, deliver my soul from a false lip, from a false tongue! 3 What will he give you, and what more will he give you, you false tongue? 4 Violent man's sharp arrows and glow from the bush. / 5 Woe to me, that I live as a stranger among Mesek, that I dwell at Kedar's tent! / 6 Long enough has my soul dwelt with those who hate peace. 7 I am only peace, but when I speak, they are ready for war.

From my Bible comments on Psalm 120.

Will 120: 1-7
With this hymn begins a continuous series of hymns (Psalm 120-134), all of which have the same heading: A song during the party travels. (Danish has here: A song on the stairs.)

There have been different opinions about what this headline means. Some believe that the stairs mean the 15 steps on the stairs up to the temple. They led up from the women's court to the men's.

But the most common opinion is probably the right one, namely that the stairs signify the annual festive journey that the children of Israel made from all over the country and up to Jerusalem at the three major festivals.

Jerusalem is quite high, which is why it is always called to go up to Jerusalem. In the surrounding mountains the road winds up from one ledge to the other so that it truly looks like a staircase.

It is a good idea in this that the children of Israel went up to Jerusalem with song. They went higher and higher, step by step. The spiritual walk up to heavenly Jerusalem also progresses from step to step.

Therefore only in the name of Jesus,
then it goes home too,
then every joy and every need
a step on our heavenly ladder.

Already in David's time, these party journeys were of great importance in the spiritual life of the people. Four of these songs during the party trips are also by David, one of Solomon. The others probably date from the time of Babylon's return.

This hymn that we have now can be divided into two. First, v. 1-4 comes with a prayer for salvation from false, deceitful enemies. Then in v. 5-7, the psalmist portrays how heavy it was to be surrounded by enemies who constantly waged war.

The situation we are describing here fits well with Israel's condition after returning from Babylon. Then they had great strife with the Samaritans. They were then half-pagans, but would also claim to have the same share in God's kingdom as Israel.

When the children of Israel began to build the new temple, the Samaritans would join. But they were denied it, because Zerubbabel and Joshua said to them, "It is not with you that we will build a house for our God" (Ezra 4: 3).

Then the Samaritans were upset that they were not recognized and put out an evil rumor about the Jews of the Persian king. In this way, the Jews were prevented from building the temple for a long time.

These Samaritans are a good image of all name Christians who become embittered when God's true children will not recognize them as believers.

The people of God go to the Lord in his distress. After all, this path has always been shown to lead to salvation (v. 1). In v. 3, the psalmist addresses the enemy with the question: "What will he (that is, the Lord) give you, you false tongue?"

And he replies, "The warrior's sharp arrows and such glow as it is when the broom bush burns."

What the enemy had prepared for Israel should now strike them. They had tried to harm the people of God with evil, false words - they were sharp as arrows and scorched like a den. Now they would experience the judgment of the Lord as sharp arrows and the fierce anger of God.

"As it happens when the broom bush burns" - it means something that can burn for a long time. Such embers provided strong heat and could remain under the ash for a long time.

At the end of the hymn, the psalmist interprets the heavy state of God's people in: "Woe is me, who must live as a stranger among Mesek, and must dwell in the tent of Kedar" (v. 5).

Meshech was the son of Japheth (Genesis 10: 2). The name Mesek here means a people who lived between the Black Sea and the Caspian Sea, and they were known for their cruelty and cruelty.

"Kedar" was like the son of Ishmael (Genesis 25:13) and denotes an Arab people who had inherited the desire to fight and tire of their ancestor. Both names are expressed here the people of the world. They can never leave the saints at peace, but they constantly attack and despise them. And so the people of God will learn to know their position as a foreigner and a foreigner here on earth.

"Long enough has my soul dwelt with those who hate peace" (v. 6), says the psalmist.

Yes, long enough. For too long, many have lived with the unbelieving world. Still, it's good when it comes from a heart: long enough. But now it will also be over. Long enough I was with the world. Now my place will be among the people of God, among those who love peace.

But even if a human being is converted, the people of God in a sense will still live with the world. The garlic and wheat should grow together until the autumn.

All the children of God must know that it is impossible to maintain peace with the world. "If possible, keep peace with all men, as far as it is in you" (Rom. 12:18). This is how the Lord's Apostle speaks.

God's children must make peace (Matthew 5: 9). But the people of God cannot let the truth go, and the salt of truth stays in the eyes and hearts of the unbeliever. Therefore, it is never different for God's people on earth, as it says here: "I am only peace, but when I speak, they are ready for war" (v. 7).

In the world you will have tribulation, Jesus has said to all his pilgrims who go with him up to Jerusalem. But he adds, "Be bold! I have overcome the world" (John 16:33).
(quote at the end,)

We read here that we as believers should be attacked by people who do not know the Lord.
These Bible commentaries say the following:
"Kedar" was like the son of Ishmael (Genesis 25:13) and denotes an Arab people who had inherited the desire to fight and tire of their ancestor. Both names here represent the people of the world. They can never leave the saints at peace, but they constantly attack and despise them. And so the people of God will learn to know their position as a foreigner and a foreigner here on earth.
(quote at the end.)

The children of the world are capable, capable and will not be kind and good to us as believers in Jesus.
They behave simply and unfairly towards us.
They create problems and accuse us of doing so.
In other words, they are making false charges against us.
This is almost unbelievable, everything is turned on its head.
We behave fairly, well and truly.
And we are faced with being dishonest, evil, and lying. Although it is the truth is the opposite.
This is a spirit struggle - that we just have to learn to stand in.
At the same time, we see here that living in conflict is something we as believers want to avoid. At the same time to get away from it, but we must fight.
Then we do it without backing out, because we want to win!
Lagt inn av Jan Kåre Christensen kl. 04:46