No. 1490: The witch hunt for President Donald Trump also tells the stand of others, not least that Norway and Europe are far more leftist and corrupt than the United States and many other countries and continents!

No. 1490:
The witch hunt for President Donald Trump also tells the stand of others, not least that Norway and Europe are far more leftist and corrupt than the United States and many other countries and continents!


Picture of Majority Leader Nancy Pelosi, Justice Committee Chair of the House of Representatives Jerrold Nadler and Intelligence Committee Leader Adam Schiff who I believe is really taking on "water over the head" with the joking game they are doing with above all the world.
Is obvious that this will hit them even when this whole dad is over! 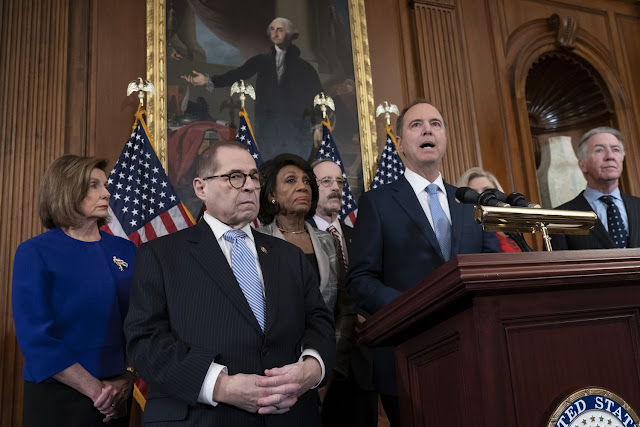 What I think Trump has so little against this national court is that then everything has to come up and up. Blue. who this announcer is.

President Donald Trump really has everything to gain from this national court that they obviously have nothing nearby to convict him of what has come so far.
Everything is only loose claims heard through 2nd and 3rd degree witnesses, no one who has had to deal with the case in the first place.
Then, first and foremost, I think of President Donald Trump and Ukrainian President Volodymyr Zelenskyj.
Trump & co are running chewy tactics. Here, time is to be spent so that all the rats will be on display, and that Trump can get no better advertising for taking home the next election than spreading all the ratship of the Democrats.

This matter should occupy the United States until the summer holidays so that all Democratic senators are prevented from running for election. That will result in President Trump getting "easy match" against "sleepy" Joe Biden 30330. At the same time, President's attorneys must sue Schiff, Pelosi, Nadler, Giaremella and Hunter Biden and dress all of them "stick naked" in front of the American people. The president now has the opportunity to reduce the Democratic Party to a mini-party that will never return to the "pinnacles of power".

It is sad that the entire left-wing and unilateral press in Norway does not warn against this and sees some scruples and witch-hunt against President Donald Trump.

Preacher and preacher David Auke from Tønsberg writes on VG net that I will take with me:

Seeing how the accusations of the Democrats have shrunk more and more as their witnesses have shown that they have no firsthand knowledge of what has happened portrays them in an increasingly ridiculous light! First, the charge was quid pro quo - then it was changed to bribery and now it's changed to abuse of power - so they've found the charges and changed them along the way in this crazy game. Who can take these Democratic representatives and this party seriously? Meanwhile, Trump is far ahead of all the Democratic presidential candidates in the most important states.

Everything peaked yesterday when Nadler spoke to the Democrats and conveyed that for Democrats it is important to stop Trump because the American people are not worthy of the confidence to have the opportunity to elect him as president in a Democratic election.

This says one who is himself democratically elected but who speaks like a totalitarian dictator. Didn't all the craziness that has happened reveal who the democrats are up to now they were thoroughly revealed with this crazy statement to Nadler who is one of the tops of the corrupt Democratic Party.

Must be insanely sour to be Trump-hater and Boris Johnson-hater by day. But THINK: For the next 5 years you have to live with Trump still just sitting and Boris taking the UK out of the EU's stifling iron grip! Meanwhile, the bell sows turn left-wing Norwegian journalists well, followed by their faithful followers who join the flock of sheep - a crowd that has been astonishingly quiet after Boris Johnson's crushing victory yesterday! The song says: Oh, it's fun to be a nissan. But it's almost as much fun by day - and for YEARS ahead - to have to sing the song: Oh, it's tough to be a leftist .....
(quote at end).

That one defends this in Norway and Europe what the Democrats in the US are doing with a hate campaign against President Donald Trump, says that what I write here in the headline fits:
"The witch hunt for President Donald Trump also tells the stand of others, not least that Norway and Europe are far more leftist and corrupt than the United States and many other countries and territories!"

Think that this process of national justice will make the Norwegian people - not the journalists - hardened and blinded.

Then the Norwegian people will realize that they have really been brought to light about the production that Norwegian and partly European media has covered really everything about President Donald Trump.
That it has been directly misleading, misleading and wrong! A pure failed witch hunt that has turned itself back on them!
Lagt inn av Jan Kåre Christensen kl. 12:22