No. 998: So it happens that I have warned against that lesbians and gays are accepted in the same way they gjengifede in Christian communities and parish!


No. 998:
So it happens that I have warned against that lesbians and gays are accepted in the same way they gjengifede in Christian communities and parish!

Amos 3 7 Surely the Lord GOD will do nothing, but he revealeth his secret unto his servants the prophets.

Picture of Lot and his family flying under God's judgment of Sodom and Gomorrah, unfortunately so was his wife into a pillar of salt when she looked back, contrary to the angels' words (God's word to her and her family).
We live in the time that the Bible describes as the last of the last days. In recent days began after the word learn on the day of Pentecost and will end with a final disaster called the word of God among others for Jacob's tribulation as this will be the start of Israel into a 1,000-year kingdom of peace will be like a birth - a very tight and painful birth! 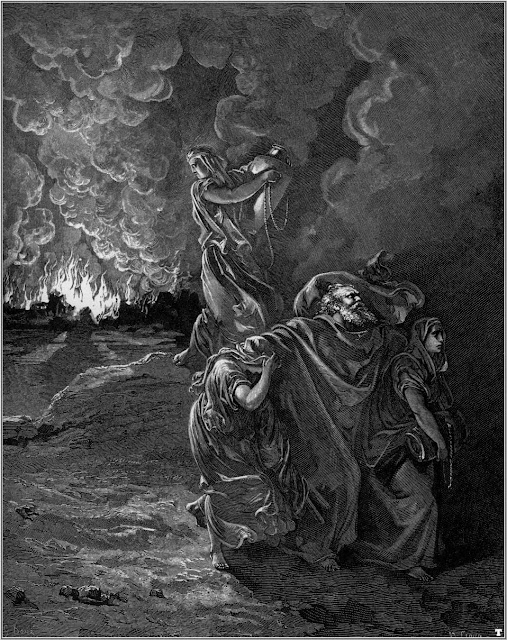 This as now happens, I basically warned against in over thirty years!

It's like Amos says: "The Lord GOD will do nothing, but he revealeth his secret unto his servants the prophets."

2 Chron. 20. 20 The morning after they took early on, and went to Tekoa Desert; and as they went out, Jehoshaphat stood and said, Hear me, Judah, and ye inhabitants of Jerusalem; Believe in the Lord your God, and ye shall stand! Believe his prophets, so shall ye prosper

We read: Luke 17 26 And as it was in the days of Noah, so shall it be in the Son of man days: 27 they were eating and drinking, marrying and being given in marriage, until the day that Noah entered into the ark ; and the flood came and destroyed them all. 28 Similarly - as it was in the days of Lot: they ate and drank, they bought and sold, they planted, they built; 29 But the same day that Lot went out of Sodom it rained God fire and brimstone from heaven and destroyed them all - 30 so shall it be in the day when the Son of man is revealed.

I have over the years never to classify sin - we now see what is about to happen and is happening!

Matt. 24. 10 And then shall many be offended, and shall betray one another and hate one another; 11 and many false prophets will arise and deceive many

Many wild offended - just what I have experienced and are experiencing!

I have said from day one that remarriage is sin, to live as a homosexual or lesbian is a sin. We can not katekisere some forms of sin. Sin is and remains sin!

I know that I'm not better than anyone else, God forbid! But what scripture says is and has always been my parole. In past - present and future!

Even the false prophet Jan Hanvold has now openly defended those who are lesbians.

After Hanvold Facebook posts that I mention here:
"They hetrofobie is on the warpath. And can not stand that someone has a different view of gays than themselves. But so it is with those who suffer from hetrofobie. If the gays cry for tolerance, they must be able to tolerate bishops who have a different view. Bishop Per Arne Dahl, a pious man who follows his conscience and should become respected for his views. The harassment he exposed to the heterosexual men, is the disrespectful. We are in danger in Norway to lose freedom of speech and what is worse, religious freedom. Where people want to follow God's word as his greatest authority. And how people will obey God rather than men. So when one must respect that people have different views. But those who cry for tolerance, and proves to be the least tolerant. And then the word that I have introduced, more and more real. That we live in a demokratur. Where the elite and those who shout and scream the loudest, to decide what we think others think and believe. And if we think otherwise. We are intolerant and suffer from homophobia or Islamophobia. But anyone who suffers from hetrofobie and kristofobi are tolerant people. And of course they're the ones that get media attention, they are poor people who suffer from hetrofobie. Soon, anyone who does not agree with these folks, stamped with that driver with hate crimes. The time comes when I can no longer preach clean and clear. If I say that Jesus is the only way to God. Discriminates I all Muslims and others who do not believe. Or I preach what the Bible says about marriage. Or I express myself regarding abortion. As we saw here in 2014, when there was a storm, because some doctors would not have an abortion. Therefore it is important that Christians stand up for men as Bishop Per Arne Dahl. A pious lord servant who has a big heart for all people. Let us pray for him. "

Here shows Hanvold its true I! He thinks to criticize those who live in sin will cause us to lose freedom of speech. What does it mean? We must preach the whole world cheered us or hate us. If we are accepted, or hated, we are set to hold forth God's eternal and true words. Where both remarriage and all other types and forms of sin should be pointed out, is revealed and held outside the church!

I do not go around and hit me on the chest and said: "Oh look here, what did I tell you!"

It should just get even more people to open their eyes that what incurs God's judgment above anything is not AP and others Israel hatred, if it is bad enough!
But above all God's people who live and walk in sin, disobedience and rebellion!

Scripture says we ought to lie at heart:

1 Pet. 4. 17 For the time is come that judgment must begin at the house of God; but it begins with us, what will be the outcome for those who do not obey the gospel of God?